An illustrious Indian artist, Raja Ravi Varma’s unique style of painting has inspired and influenced many artists around the globe. DESIblitz showcases the best pieces from his exquisite array of artwork.

Much of Indian literature describes beautiful and compassionate women as featured in the artwork of Raja Ravi Varma.

The talented Indian artist is one of the nation’s most celebrated painters, and one of the pivotal figures of historical Indian art.

His oil on canvas paintings are truly breathtaking and have a mesmerising appeal.

Raja Ravi Varma was born in 1848 in Kerala, India. An artist by birth, Varma was taught water-painting by a palace painter Rama Swamy Naidu in his younger days.

Many of his paintings mirror characters from Indian mythology in a very distinctive style. Ravi Varma was one of the pioneers in fusing European techniques into Indian artistic tradition.

In particular, his portraits of women exude shapely elegance and grace. No doubt, these women resemble a perfect Indian femininity that would be idealised in later centuries.

Ravi Varma became a renowned name in the field of Art after his winning an award in 1873 Vienna Exhibition.

His paintings won 3 gold medals in a row in World’s Columbian Exposition held in Chicago in 1893. 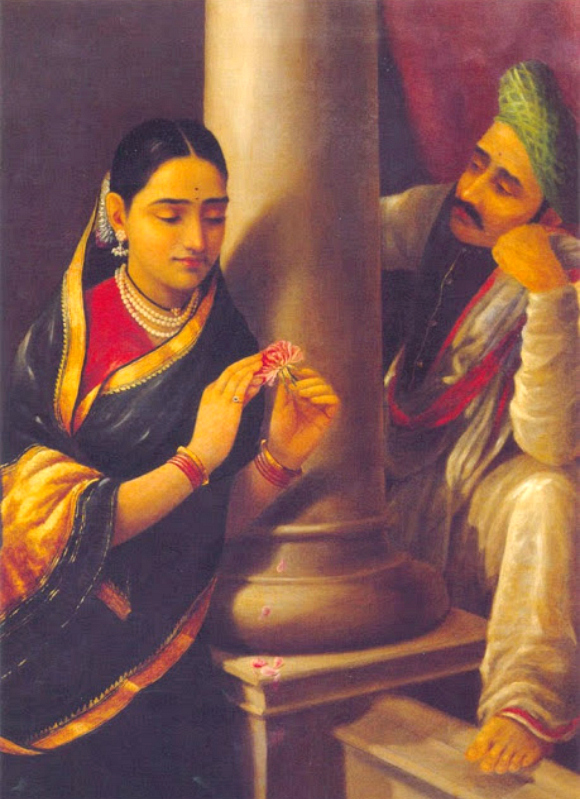 In this painting of two lovers, Ravi captures the beautiful moment of courting.

The woman hides a bashful smile and the man’s bespotted curiosity, which leads him to gaze intently at his love, make it an enchanting piece of art to look upon.

2. Damayanthi and a Swan 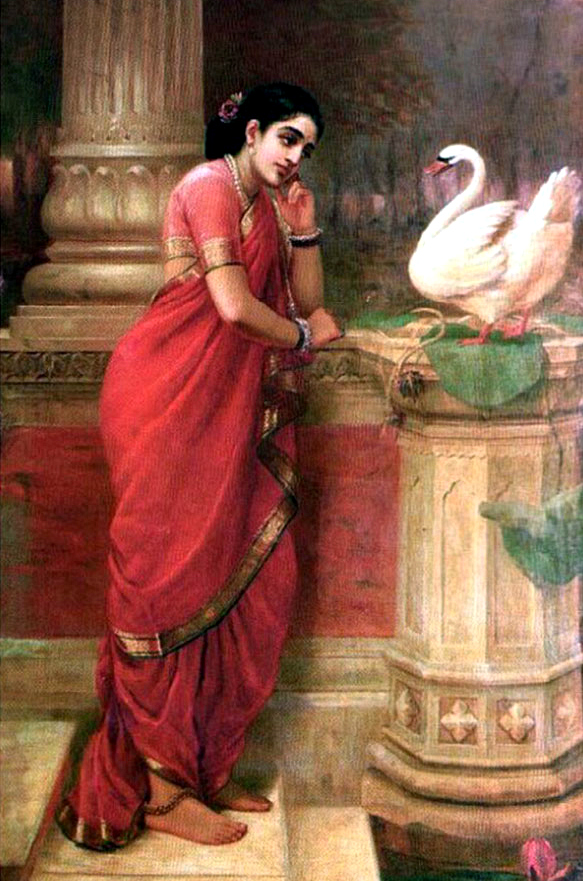 This painting inspired by the Mahabharata, is the famous tale of Nala and Damayanthi. Prince Nala wants to marry the beautiful daughter of King Bhima, Damayanthi.

As she does not know him. Nala sends her his swan instead who finds her alone in her garden and sings the Prince’s praises.

3. Mother and her Child 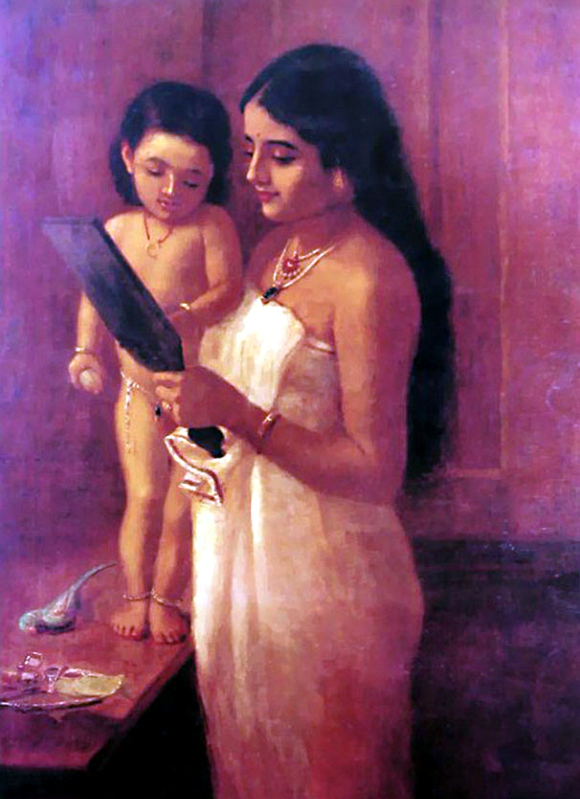 A young mother looking at a mirror with a baby by her side is one of the most appreciated paintings of Ravi Varma.

Pride and gratification are painted over the woman’s face while the child seems inquisitive. It is a very personal moment that has been beautifully captured by Varma.

4. Portrait of a Lady 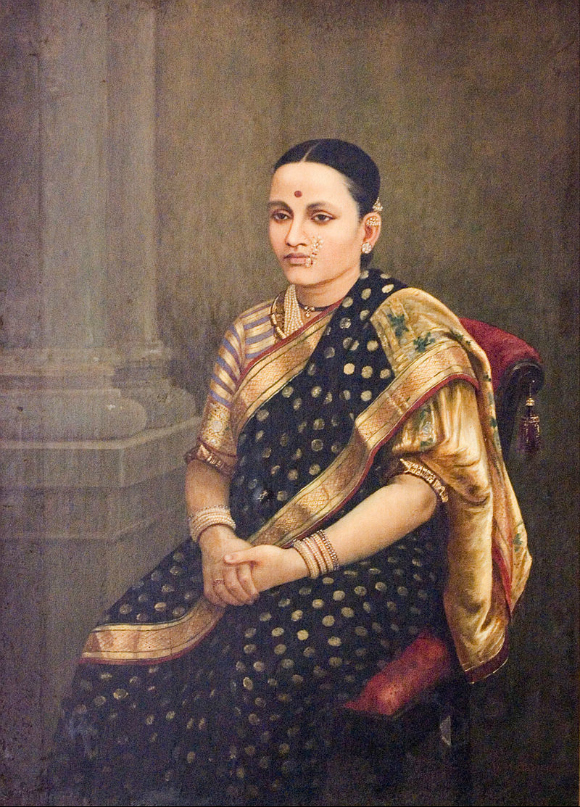 A striking lady sits with poise and composure in this Varma painting.

She is adorned in a saree and regal accessories which display a strong yet gentle woman of ancient India. 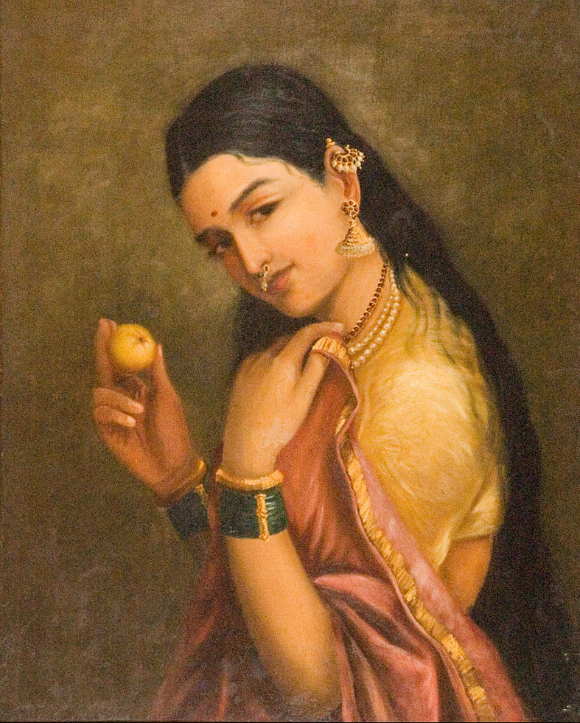 Ravi Varma visualises a young woman holding a fruit in this painting.

Festooned with Indian jewellery, the woman’s angled and curious glance is simply exquisite. 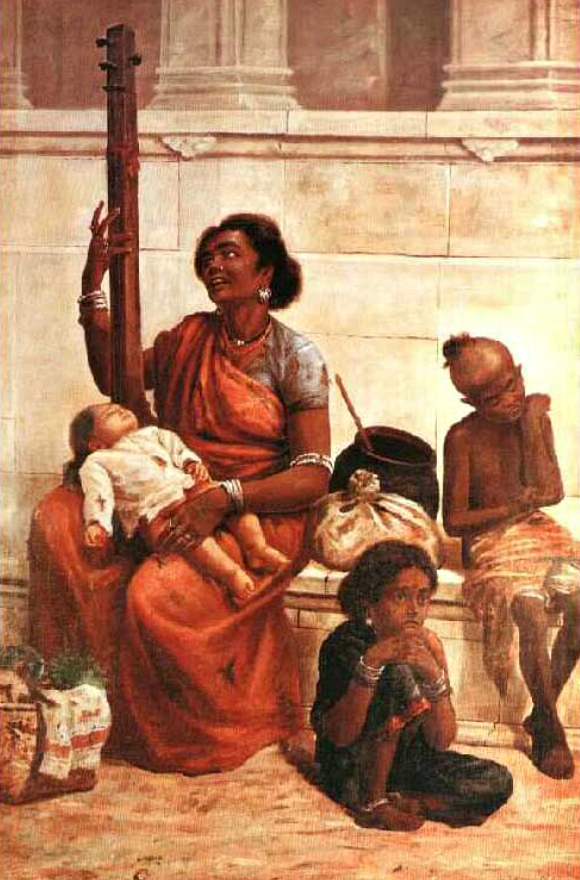 A gypsy woman sings with a Sitar while her children sitting around is an agonising picture of poverty and survival.

The sadness and vulnerability shown in the faces of children is beyond words. 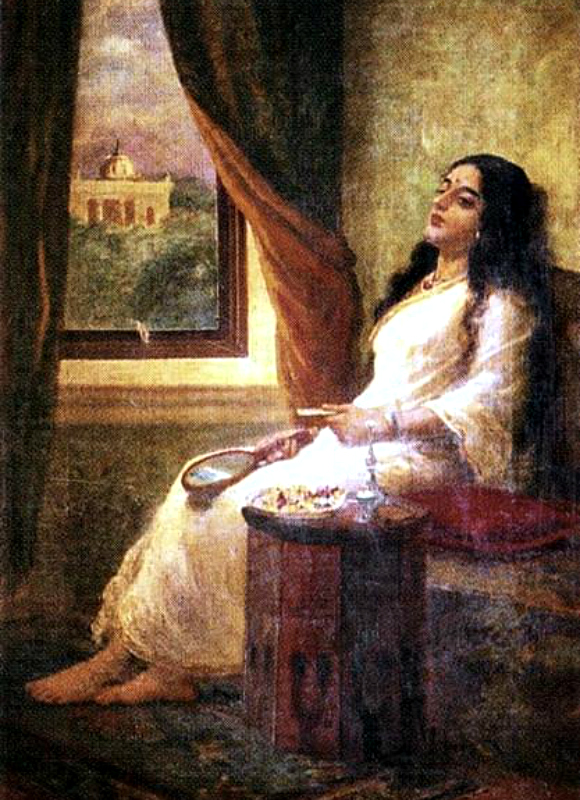 A lady sits in contemplation while leaning against the wall. Her white saree glows in the sunlight coming from the window .

Varma’s skilled hands has brought out a beautiful composition. 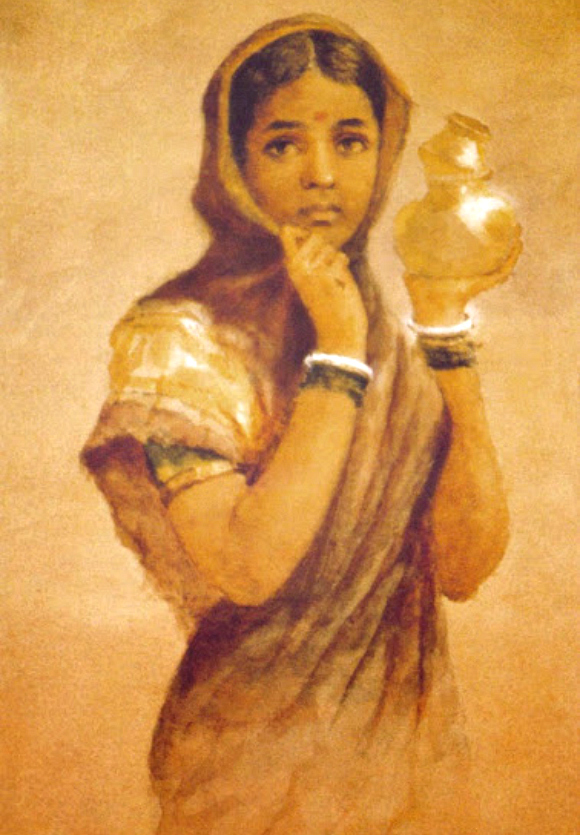 A milk maid carrying a pot of milk is pictured in this painting.

The young and naïve girls seems to bubble with innocence and modesty as she draws her dupatta closer to her face. 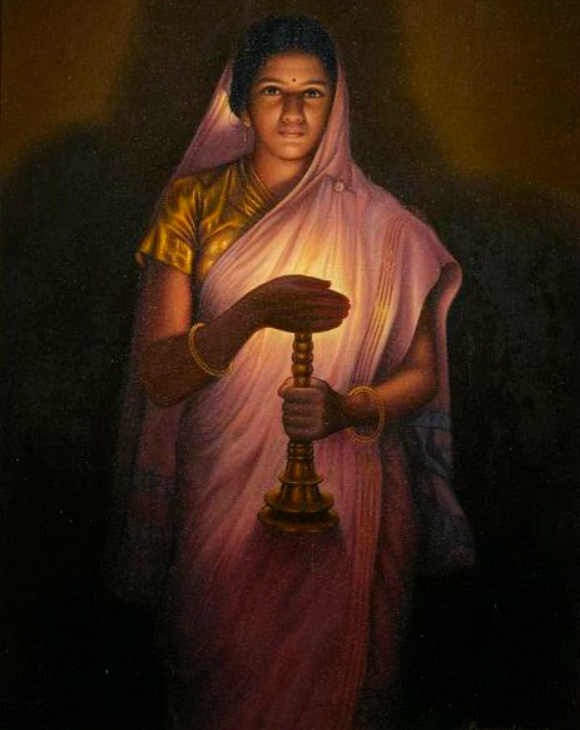 The flame of the lamp mirrored in the face of the woman created an incredible sense of illumination.

She seems to be keeping her hand against the breeze to protect the flicker. 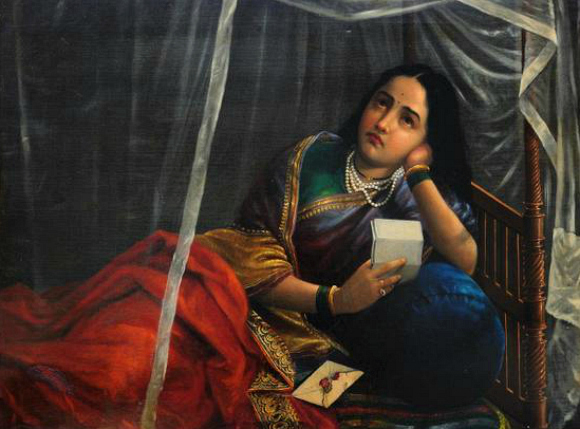 Grief and frustration is written all over this woman highlighted by Rav’s pursing of the lips. She seems to be dejected by the letter she has received.

Raja Ravi Varma’s paintings adorn many art galleries and museums around the world. Contemporary artists and academics meticulously study his characteristic style in depth and detail.

Ravi Varma’s paintings are breathing portraits of realism which reflect the existence and struggle of human life.

His works and artistic style have influenced a new generation of artists, and they ensure that Varma’s artistic legacy will remain an inherent part of India’s heritage for centuries to come.

Shameela is a creative journalist, researcher and published author from Sri Lanka. holding a Masters in Journalism and a Masters in Sociology, she's reading for her MPhil. An aficionado of Arts and Literature, she loves Rumi's quote “Stop acting so small. You are the universe in ecstatic motion.”
LIFF 2016 launches Short Film Competition
Martin Wickramasinghe ~ Writer of Culture and Life