Priyanka Chopra appears once again on The Tonight Show, to beat Jimmy Fallon at the popular bobbing apples game. DESIblitz has more.

"PeeCee's skills were tough to match."

Bollywood’s finest Priyanka Chopra starred on America’s favourite TV Show, The Tonight Show Starring Jimmy Fallon, where she got to show off her apple bobbing skills.

The popular Autumn game, usually played around Halloween, required the star to pick up as many apples floating in a bucket full of water, using her mouth.

Before starting, PeeCee argued that Fallon had the advantage, as it was a popular American game she hadn’t yet played.

She jokingly said: “I just want to say that I am not American and I didn’t even know about this until he told me, so he has the advantage!”

When she began, however, she elegantly showed off her bobbing skills, picking up five apples. The Quantico star cleverly picked all the apples with stems, making it even more difficult for her rival Fallon to win.

PeeCee made it look so simple, as not only did she claim many apples, but she remained mess free, the water barely affecting her perfect make-up.

Regardless, it seemed like it was an easy target to beat, especially for Fallon who would have played the game several times before.

Fallon got stuck in, proving that PeeCee’s skills were tough to match. Unfortunately, he didn’t match PeeCee’s elegance or skill. He managed to score zero apples and got very wet in the process.

She then decided to teach Fallon her ‘to the side’ method, where he managed to get one apple, getting even wetter in the process.

The pair looked like they were having serious amounts of fun whilst the audience cheered on PeeCee, the new master of the apple bobbing game.

This is the second time PeeCee has starred on The Tonight Show and it’s not the first time she has beaten Fallon. Being the first Indian to ever appear on Fallon’s show, on her first visit she had previously beat him at a chicken wing eating contest, showing off her love for food.

You can watch the entire video clip here: 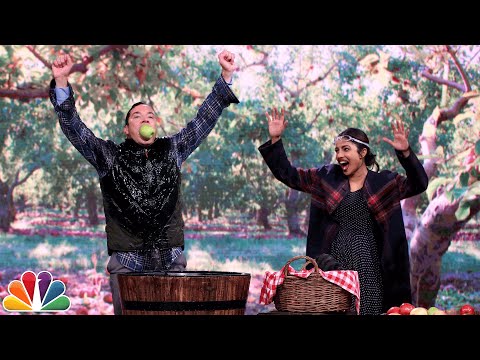