"They start getting their kicks from that."

Italy, Spain and France were the first countries to receive free access to the subscription.

Now it has been made available to the rest of the world, with a view to help to flatten the curve amid lockdowns around the world.

“With nearly one billion people in lockdown across the world because of the coronavirus pandemic, it’s important that we lend a hand and provide them with an enjoyable way to pass the time.

The incentive seems to be having an effect as the worldwide traffic has increased as more countries have been placed under lockdown.

This is seen as a positive thing because some of the consumers would normally be out looking for hookups.

If people continued to go out looking for casual sex, they may be increasing the risk of spreading COVID-19. But instead, they are satisfying their sexual urges at home. 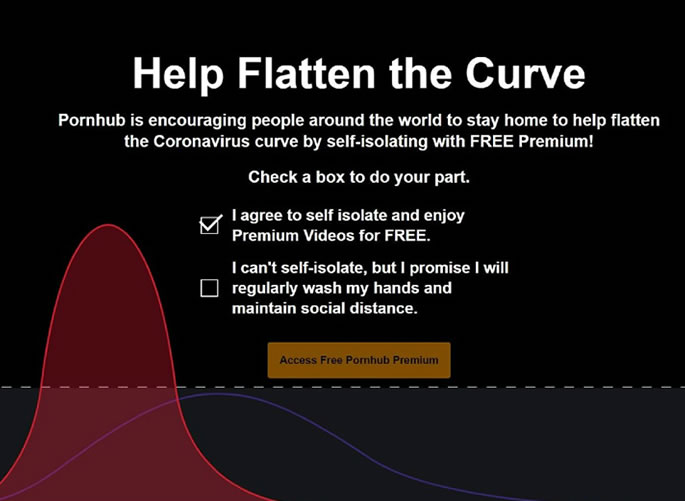 However, with the good aspects come the bad.

A senior police officer in the UK warned that men between 18 and 26 are emerging as a “new group” of online paedophiles.

He revealed that the UK is the third biggest consumer of online child sexual abuse.

“They get to the point where there’s no pornographic material that is stimulating them so then they start to explore what child abuse imagery might look like.

“They start getting their kicks from that.”

He went on to say that the problem may get worse as technology advances.

Mr Bailey added: “You look at the opportunities that will be afforded by people who are living in poverty to then exploit children to generate income.”

He said that 500 offenders are arrested and 700 children are safeguarded every month, however, the number of referrals and the level of depravity “just keep growing”.

“We’ve got to start coming to terms with the fact that there are some appalling things taking place online that unfortunately, the internet is probably the route of most of the evils.

The NCA previously warned that at least 300,000 people pose a sexual threat to children during the lockdown period.

They have also said that they will be giving more funds to its ‘models’.

However, their work does not distract from the abusive practices that the company has been accused of.

For example, the ‘Sex Worker Outreach Project’. The term “sex worker” usually comes from someone who profits from looking the other way from the realities of sex trafficking.

The reality is that the industry is fueled by the trafficking of vulnerable youth and others through force, fraud and coercion.

Away from Pornhub’s sex trafficking connections, it is also hurting the men and women of the receiving end of the screen.

Dhiren is a journalism graduate with a passion for gaming, watching films and sports. He also enjoys cooking from time to time. His motto is to “Live life one day at a time.”
The Khan Brothers who sold Idea to Cisco for $610m
Indian Wedding takes Place using Zoom Video App