A Pakistani couple has admitted to sexually abusing 45 girls in Rawalpindi. They were arrested after one of the victims filed a police complaint.

A Pakistani couple was arrested for sexually abusing and blackmailing 45 girls in Rawalpindi. They also filmed the sexual abuse.

City Police Officer (CPO) Mohammad Faisal Rana stated that action was taken after a complaint was made on August 3, 2019, by one of the victims.

The suspects, identified as Qasim Jahangir and Kiran Mehmood, later admitted to sexually abusing 45 girls. They also confessed to taking photographs and filming at least 10 of the girls.

The victim, who is an MSc student at Allama Iqbal Open University, was kidnapped outside Gordon College by Mehmood, who claimed to be a student.

She said that her “brother” would be coming to pick her up. A short while later, a man arrived in a grey car and Mehmood pushed the victim inside.

Mehmood then threatened the student with a knife to keep quiet.

The victim was taken to a house in Gulistan Colony where she was raped by Jahangir. Meanwhile, Mehmood took photos and filmed the sex abuse.

They then showed the victim the video and threatened to upload it online. The victim was dropped off on Tipu Road later that night.

CPO Rana said: “The husband assaulted the girl sexually while his wife Kiran kept recording the satanic act on a mobile phone.”

After the university student filed a complaint, a case was registered and the Pakistani couple were soon arrested. During interrogation, the couple confessed to their crimes.

According to officers, Jahangir and Mehmood would look for school, college and university girls.

The couple would abduct them and take them to a rented house where they were raped.

After the assault, the girls would be dropped off at deserted locations in Rawalpindi.

The house was raided and officers recovered 10 explicit videos and thousands of photos. The car used to carry out the crimes was seized by investigators.

CPO Rana stated that evidence such as bedsheets was recovered and sent for a forensic examination to be conducted. 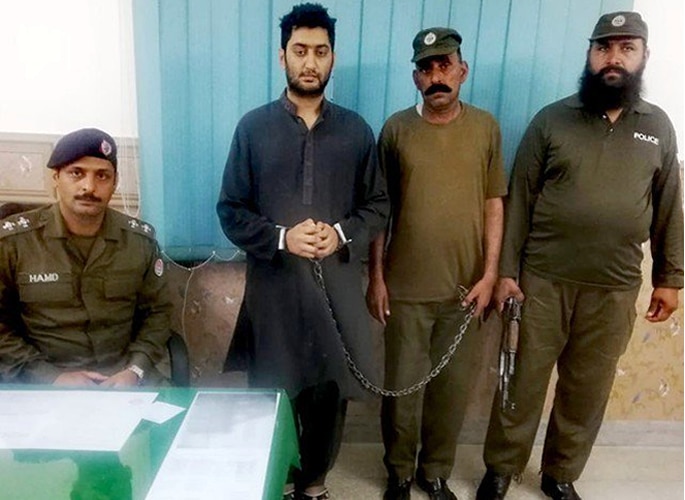 He has directed the officers assigned to the case to locate more victims and their families in order to gather more information and to get complaints from them so they can register separate cases against the couple.

CPO Rana added: “The wife has been sent to Adiala jail on judicial remand by the court while the husband is in police custody on physical remand.”

The Tribune reported that he also told officers to identify the suspects in the videos and photos and to lodge a separate case for each incident.

Images courtesy of The Express Tribune