Pakistan’s Prime Minister Imran Khan has shockingly unfollowed all of his accounts on Twitter, which includes ministers and journalists.

In a surprising move, the official Twitter handle of Pakistan Prime Minister Imran Khan has unfollowed all accounts.

The Prime Minister was following 19 Twitter handles, including former wife Jemima Goldsmith and some journalists.

Other accounts which have been unfollowed include organisations that he is heading such as the Pakistan Tehreek-i-Insaf, the Shaukat Khanum Memorial Hospital and Namal Institute in Mianwali.

A spokesperson for Khan’s party urged people not to read too much into the matter. 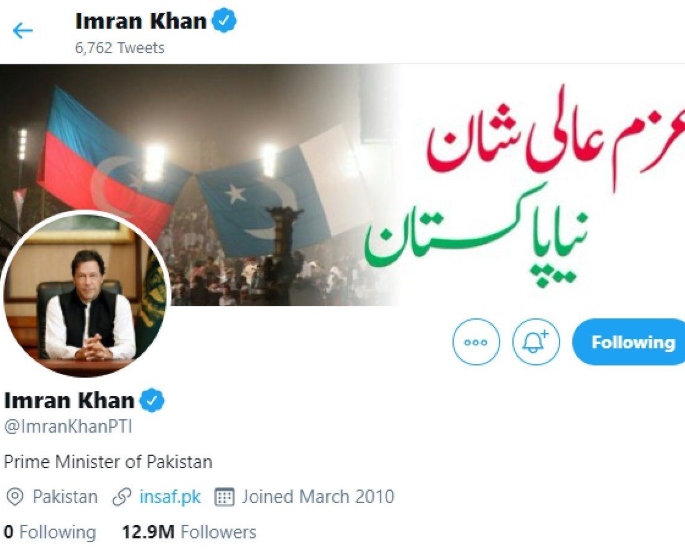 He also denied that criticism from the public and journalists prompted the move.

Jawad maintained that the party and Khan still consider social media to be an effective medium and hadn’t lost trust in it.

Before the wipe-out, the last account that the premier had decided to unfollow was of journalist Hamid Mir.

There are rumours rife among netizens that the decision was taken amid scathing, and often sarcastic criticism of the government by the Pakistani TV anchor.

While initially some initially speculated it was an error, others wondered why he did it.

Imran Khan had created his Twitter profile in March 2010. The Pakistan PM is currently being followed by 12.9 million followers on the micro-blogging site.

However, this new development, whether a glitch or an intentional act, has given a chance for Twitterati to take a pot shot at Imran Khan.

The Pakistan PM has continued to follow his first wife after divorcing her and subsequently marrying her twice.

Here are some of the reactions:

Khan Sahb @ImranKhanPTI, if there's one person you must never unfollow… It's Jemima the gem.

“Even though Imran Khan unfollowed everyone but I am sure something inside Jemima just broke.”

What can be the Reason ??

(Unfollowing is still ok but Imran Khan unfollowed even Jemima?)

Imran Khan has not yet released a statement on his reasons for unfollowing everyone on the micro-blogging site.

Akanksha is a media graduate, currently pursuing a postgraduate in Journalism. Her passions include current affairs and trends, TV and films, as well as travelling. Her life motto is 'Better an oops than a what if'.
Indian Mother & 3 Children found Dead after Disappearance
Man jailed for sustained Knife Attack on Victim