An Indian couple living in New Zealand were stabbed to death. Their bodies were discovered at their home in Auckland.

"it is a family harm incident and it is a tragedy."

A husband and wife were found dead at their home on March 19, 2021, in Epsom, Auckland, New Zealand, having been stabbed.

Another man is in a critical but stable condition.

Medical experts will advise the police when it is appropriate to interview the man.

DI Beard said: “No charges have been laid at this stage.”

A close family friend had also been at the scene. He suffered superficial injuries and is in shock.

DI Beard explained: “This is a double homicide, it is a family harm incident and it is a tragedy.

“We feel for the family and we extend our condolences.

“The rest of the family are struggling.”

Investigators will look into the background of all family members.

Post-mortems revealed that the victims died as a result of stab wounds. A knife was also found at the scene.

Several phone calls were made to the ambulance services at the time of the incident.

DI Beard said: “Obviously this was a traumatic incident for emergency staff.”

The couple were originally from Mangalore in India but moved to New Zealand in 2007.

Their son Sheal had recently graduated from Massey University engineering school and just started his career.

Although the investigation is ongoing, it was reported that the couple were unhappy because their only son wanted to move out of the family home. 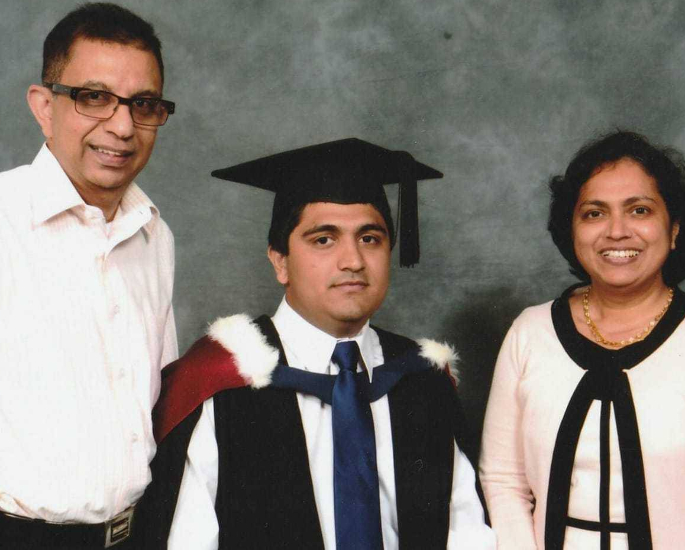 A friend told the Herald that Herman started posting family pictures since Valentines Day on social media to make a statement that his family was “a single unit not to be broken”.

The friend said: “Herman didn’t have any hobbies, but he is deeply religious and would spend much of his time with his Christian organisation.”

The friend last met Herman and Elizabeth on January 10, 2021. They had arranged to catch up again over Easter.

He said: “I too have an adult son who has moved out to live on his own, so Herman was asking me about it.

“But he wasn’t too happy that his son was wanting to move out.”

“I guess like most Indian families, he preferred his son to live with them until he got married or even after that.”

The friend found out about the double stabbing through the media and was still in shock.

He had known Herman and his family for around 30 years, even before they moved to New Zealand.

He added: “At the time, he knew I was moving to New Zealand so he often had questions for me about it.

“Ultimately, Herman wanted to move so his son could have a better education and a better life.

“Herman is a simple man, he doesn’t have any vices that I know of… he doesn’t even drink alcohol. In fact, when we had dinner at their home, we just had juice.”

Another friend said Herman had told him that he was against Sheal wanting to move out.

He said: “Herman and Elizabeth lived for Sheal, so the idea that he wanted to go out there on his own hurt him deeply.”

On the Valentine’s Day photo, the friend added:

“On Valentine’s Day he posted a family photo taken at Sheal’s graduation, I guess as a way of saying he loved his family and that it is a single unit not to be broken.”

Dawn Freshwater, Vice-Chancellor at the University of Auckland, sent an email to staff, saying the double stabbing had come “as a shock to us all, especially those who worked closely with Elizabeth.”

Elizabeth worked at the university as a group services coordinator in the School of Pharmacy and was described as a highly respected colleague and friend.

A police cordon remained at the block of flats on the corner of The Drive and Alba Road.

Dhiren is a journalism graduate with a passion for gaming, watching films and sports. He also enjoys cooking from time to time. His motto is to “Live life one day at a time.”
Man fled UK after luring 13-year-old Girl to Hotel for Sex
Pub Manager jailed for Raping Woman in his Van