During his visit to the US, India’s Prime Minister Narendra Modi met with the CEO of Facebook, Mark Zuckerberg, to discuss Digital India and social media.

“We are an $8 trillion economy today. My dream is to become a $20 trillion dollar economy.”

Indian Prime Minister Narendra Modi turns on his charm during a visit to Facebook’s headquarter in California on September 27, 2015.

As part of his two-day tour in Silicon Valley, Modi stopped by Facebook to meet with CEO Mark Zuckerberg for a Q&A session.

He was welcomed with Bollywood music and an enthusiastic crowd of 1,000 at Facebook’s Menlo Park campus.

Social media was obviously on the agenda for the second most popular leader on Twitter and Facebook combined.

Modi said: “The strength of social media today is that it can tell governments where they are wrong and can stop them from moving in the wrong direction.

“We used to have elections every five years and now we can have them every five minutes.” 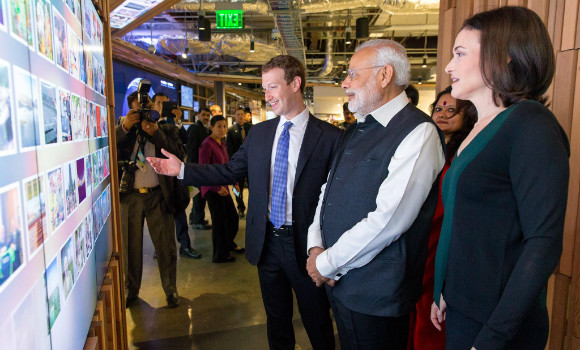 Not everyone in India has access to the internet at the moment. Modi wants to change that and connect India’s villages to the world.

With Facebook being keen to play a part in supporting his initiative through Internet.org, the bond between the two will certainly continue to grow.

Modi spoke about his plans to use technology to improve the standard of living in India, where poverty is still a common sight in the world’s third largest economy.

He also promised to promote education for girls and job opportunities for women, a timely subject matter that coincides with one of the themes at the Global Citizen Festival in New York over the weekend. 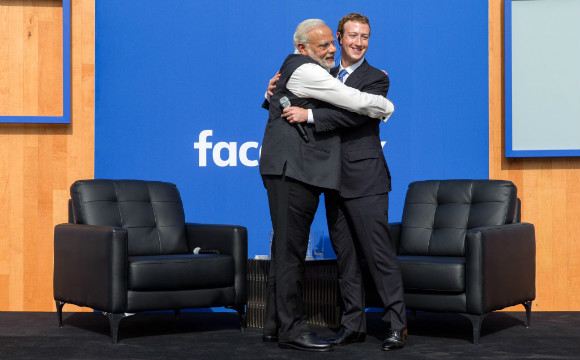 The PM said: “We are an $8 trillion economy today. My dream is to become a $20 trillion dollar economy.

“If we want to achieve our economic goals, then we cannot do that if we imprison 50% of our population inside our homes.

“[India] has moved on from scriptures to satellites. The world has started to believe that the 21st century belongs to India.”

Between talks of ambitious plans for his country, the 65-year-old PM was seen welling up when reminiscing his young days and humble beginnings. 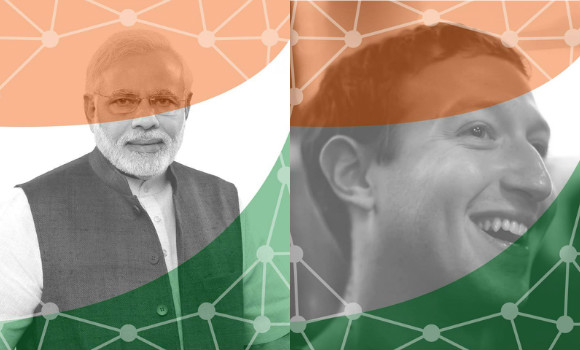 He said: “When I was small, just to make a living we would go to nearby houses and clean dishes, fill the water and do hard chores.

“You can imagine what a mother had to do raise her children.”

Zuckerberg also recalled during a ‘rough patch’, he was advised by the late Steve Jobs to pay a visit to India to find his way.

He said: “[Jobs] told me that in order to reconnect to what I believed was the mission of the company, I should visit this temple that he had gone to in India early on in his evolution of what he wanted Apple to be.

“Seeing the people and how people connected, reinforced what we were doing and is something I’ve always remembered.”

The pair wrapped up the event with a friendly hug, echoing the strong bond evident in their previous exchanges, including changing Facebook profile photos to show support for Digital India. 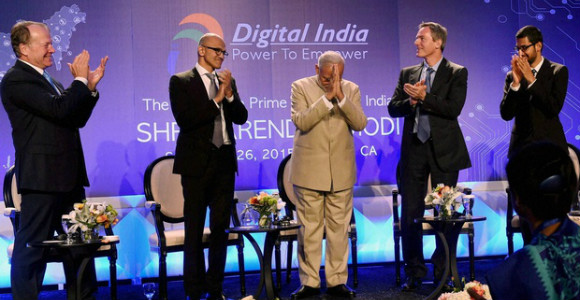 Whilst at Silicon Valley, Modi met with the brilliant Desi technology leaders like Sundar Pichai of Google, Satya Nadella of Microsoft and Shantanu Narayen of Adobe.

The fruitful meeting brought Google on board to provide Wifi for 500 railway stations in India by 2016, as part of Modi’s Digital India initiative.

In addition, Android users will be able to type 11 Indian languages from October 2015, including the PM’s mother-tongue, Gujarati. 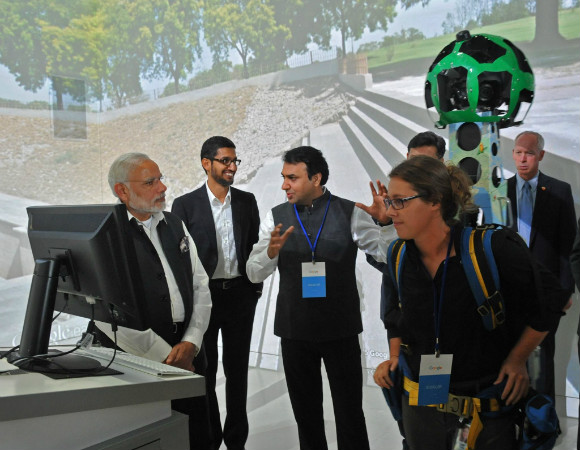 Despite the optimism, many protesters took the chance to scrutinise Modi’s lack of efforts on improving a number of human right issues.

Speaking on behalf of Alliance of South Asians Taking Action, Virali Modi-Parekh said: “Since Modi’s been in office, violence against religious minorities has spiked.

“But Modi turns a blind eye while churches are burned and Muslims and Christians are being forcibly converted.

“There is a culture of fear and victimisation, especially against minorities in India, which undermines Modi’s standing as a business partner.”

Some chose to demonstrate outside the SAP Centre in San Jose, others turned to their keyboard to express their frustration.

I hope PM @narendramodi has more to offer than rhetorics & keeps money where his mouth is. & less noise more substance. #ModiInSiliconValley

Modi will continue his US tour in New York on September 28, 2015 to attend a summit at the United Nations and meet with President Barack Obama.