A man from Mumbai has been convicted for molesting former actress Zaira Wasim on a flight. The incident happened in December 2017.

“The lights were dimmed, so it was even worse."

He molested Zaira on board a flight in December 2017 while she was still a minor.

She detailed her encounter on social media, accusing Sachdev, a fellow passenger, on a Delhi-Mumbai Air Vistara flight.

In the video, Zaira, who was 17 at the time, explained:

“So, I was in a flight travelling from Delhi to Mumbai today and right behind me one middle-aged man who made my two-hour journey miserable.

“I tried to record it on phone to understand it better because the cabin lights were dimmed, I failed to get it.”

“The lights were dimmed, so it was even worse.

“It continued for another five to ten minutes and then I was sure of it. He kept nudging my shoulder and continued to move his foot up and down my back and neck.” 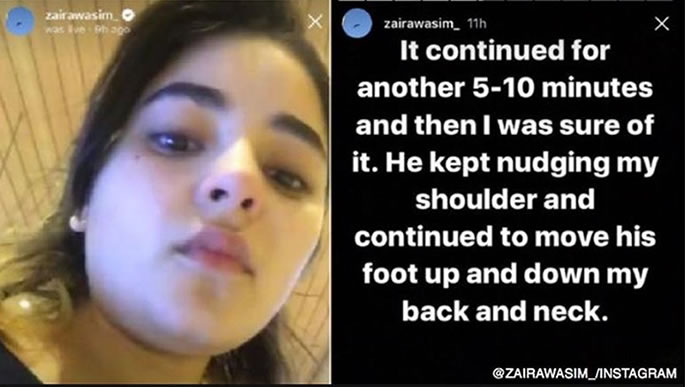 After arriving in Mumbai, Zaira informed the police and Sachdev was subsequently arrested.

The video went viral on social media and sparked outrage.

Zaira also accused the airline of inaction when she raised the issue.

The airline denied the allegation and said they had “zero tolerance for such behaviour.”

Sachdev was later released on bail. He denied any wrongdoing and accused Zaira of “hallucinating” since he was asleep throughout the flight.

But on January 15, Sachdev was found guilty of molesting Zaira Wasim.

Special Judge AD Deo, of the Dindoshi Sessions Court, convicted the man under various sections of the Indian Penal Code as well as sections 8 and 354 of the Protection of Children from Sexual Offences Act (POCSO).

Following his conviction, Sachdev was jailed for three years.

Despite his sentencing, Sachdev’s wife insisted that her husband was innocent.

She said: “My husband is innocent. He had no intention of molesting her. A young man was killed in our family, where he (Sachdev) went.

“My husband had not slept for the past 24 hours. He told the crew not to disturb him as he wanted to sleep.

“He put his feet up at bedtime, there was no intention of exploiting her.”

She went on to say that her husband’s leg accidentally touched Zaira while he was sleeping and that he had apologised before getting off the plane, which the actress had acknowledged.

Zaira made her acting debut at the age of 13 in the 2016 sports film Dangal.

She last starred in The Sky is Pink (2019) alongside Priyanka Chopra and Farhan Akhtar.

On June 30, 2019, Zaira announced that she would be quitting Bollywood.

Dhiren is a journalism graduate with a passion for gaming, watching films and sports. He also enjoys cooking from time to time. His motto is to “Live life one day at a time.”
Which Bollywood Films Should I Watch As A Newbie?
Has Akshay Kumar started the Rs 700 Crore Club?