Monty Panesar caught out with Tinder

Monty Panesar certainly does not shy away from the media limelight with his quirky antics. Caught in yet another awkward situation, the cricketer has been reportedly chatting up a young woman using the TInder app.

"I sent a message because I wondered whether it was really him. I was shocked when it was."

England cricketer, Monty Panesar was reportedly found trying to date a young American woman called Alison in Melbourne via the dating app Tinder. The activity followed a harrowing defeat against Australia in England’s Fourth Test at the Ashes.

The cricket player met the American backpacker in her 20’s on Tinder, which is a mobile app that allows you to find other people who you may like around you, allowing you to connect and chat with them.

Talking to Australian press, Alison said that she and Monty connected only four hours after the England v Australia Test Match, where Monty had bowled his final ball for England: 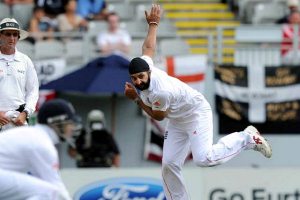 “I sent a message because I wondered whether it was really him. I was shocked when it was,” Alison said.

Alison also went onto say that Monty seemed in good spirits and expressed how much he loved ‘American girls’.

He also said that he was unable to leave his hotel because of a team curfew, and finding a way around this, invited Alison to his hotel room at the Como Apartments in Melbourne:

“I thought it was a bit strange that he would be behaving like that so soon after they had lost,” admitted Alison.

“I wanted to talk to him about cricket, but he had no intentions of that. All he seemed interested in was getting me over to the hotel.”

Alison later admitted that she messaged him on Tinder after the star changed his profile picture to one which showed himself batting against the Australian team from earlier from that day. 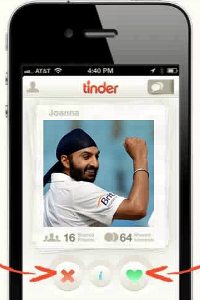 She admitted that she watched Monty playing at the Ashes when she attended her first cricket match and was surprised to see his profile on the app, wishing to check if it was actually him.

He responded by confirming that it was him and then went on to flirt with the young American, eventually inviting her over for ‘a drink’:

“I would have met him in a public place but I was not going to meet him at his apartment by myself. You would hope people do not do that,” Alison said, who claimed that she rejected his advances.

Suffice to say that Monty has been undergoing a pretty tough few years following his public divorce from wife Gursharan Rattan. She filed an anti-harassment case against him in 2011.

The cricketer has been found by the paparazzi in some unpleasant situations since. In summer 2013, DESIblitz reported that Monty had been arrested after urinating on a club bouncer outside of a night club.

Many have viewed the cricketer’s behaviour as disrespectful and disgusting, and many Asian’s in particular have been questioning whether he is a good role-model for the British Asian community. 67 per cent of our readers felt that the cricketer had lost his credibility following his night club antics. 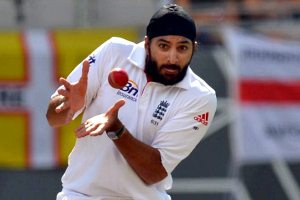 Twitter has been awash with comments and jokes regarding Monty’s latest encounter. Juggy Singh said: “Monty Panesar you disgrace!”

This is yet another humiliation for England who were brutally beaten by the Aussies in the Ashes, the final score being 5-0 to Australia. Panesar’s poor play saw him dropped from the team prior to the Final Test in match Sydney on January 3, 2014.

Alison added that she has seen Monty on Tinder regularly following his removal from the team: “He’s active every day on there. It’s strange that he’s on there when he should be ­concentrating on playing cricket.”

Panesar maybe facing further embarrassment as his standing on the England team may also be in question following his poor play in the Ashes series. Can the British Asian cricketer redeem himself? Let’s hope so.

Aisha an English literature graduate, is a keen editorial writer. She adores reading, theatre, and anything arts related. She is a creative soul and is always reinventing herself. Her motto is: “Life is too short, so eat dessert first!”
Premier League Football 2013/2014 Week 19
Liverpool FC partners with Indian brand XOLO