Megha Rao & The Success of holiCHIC

Megha Rao and her label holiCHIC have had a busy 2021. Here’s a look at how far the label has come since its inception seven years ago.

"I craved a fusion style that could blend both my worlds."

Megha Rao launched her label holiCHIC seven years ago after spending more than a decade as a model. The American Indian wanted to create something that celebrated both of her cultures.

Growing up in New York, she spent her summers in Mumbai where she fell in love with designing. What started out as a hobby quickly grew into a passion that Megha wanted to focus on.

Working in the corporate field and bringing up two children didn’t stop her from starting holiCHIC. Megha worked her hardest to juggle all three aspects of her life and her hard work paid off.

In 2020, Megha was able to quit the corporate world and holiCHIC became her full-time job. Then came 2021 and one of the biggest years for holiCHIC to date.

From designing for music videos to being featured at New York Fashion Week (NYFW), it has been an extremely fruitful year for the designer. Here is how Megha Rao got to where she is today. 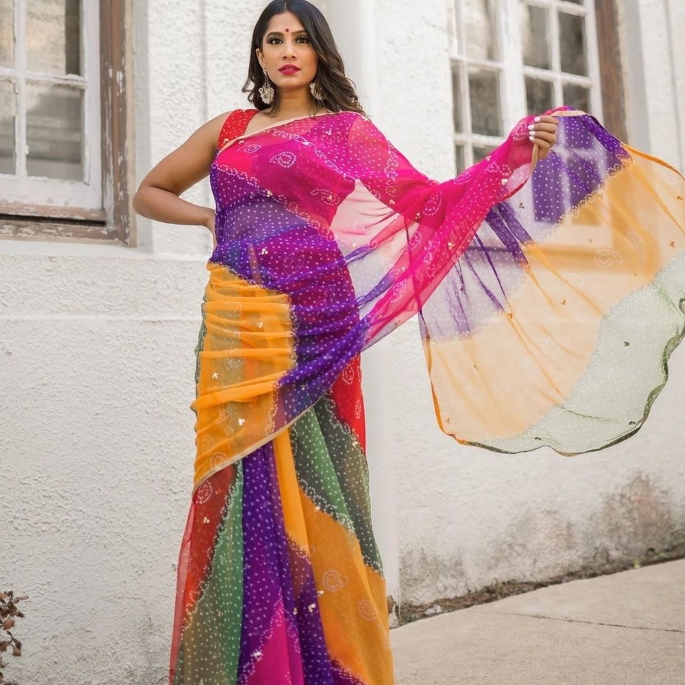 Megha Rao was a model for over a decade before she turned her hand to becoming a designer. The American Indian created holiCHIC in 2014 as a brand to bridge the gap between her western and Desi cultures.

She noticed there was a gap in the market which was what pushed her to create the line.

Born and raised in New York, Megha would visit India every summer which was where her fascination with designing began.

Here she would visit markets and purchase fabrics that she would create dresses out of. What started as a hobby soon became a passion.

The name holiCHIC is a mesh of the words ‘Holi’ as in the festival of colours in Indian culture and ‘Chic’.

It is a celebration of Mumbai and New York; two cities close to Megha’s heart as she revealed:

“I craved a fusion style that could blend both my worlds and represent who I was.

“Because I couldn’t find what I wanted to wear I began creating my own looks pulling from my Indian and American wardrobes. This eventually turned into my label, today known as holiCHIC.”

Megha Rao wanted to create Indian fashion with a modern twist, pieces that would make women feel glamorous. Her line consists of staple pieces that have longevity.

They can be worn season after season rather than fitting into the trend of the moment. 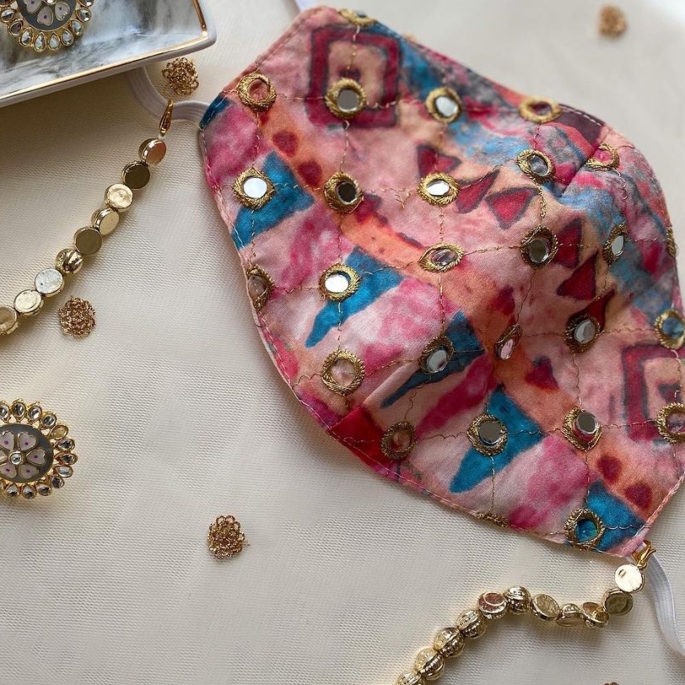 Unfortunately, the label was doing well but like many companies, was hit by the Covid-19 pandemic.

However, the fashion mogul knew quickly that she needed to adapt the business to work around the chaos.

The fashion industry was hit hard but Megha Rao was undeterred and used it to expand her e-commerce business. Originally she had only been focusing on weddings but the pandemic allowed her to expand.

There was a moment where she had thought of closing the business temporarily but then began to test new products, such as loungewear and masks.

She began to reach more customers and grow her brand which aided her to face 2021 head-on.

HoliCHIC started seven years ago and Megha balanced it with her corporate job and bringing up two children.

Her success in 2020 and 2021 means she can leave the corporate world behind as developing her brand is now her full-time job. She said:

“The pandemic allowed us to pivot, grow & scale.”

“It allowed me to quit my full-time corporate job after 15 years and go full-time with my brand.”

The New York Finance named Megha Rao as one of the ‘Top Entrepreneurs to Follow in 2021’ and this ended up foretelling what has been a spectacular year for the designer. 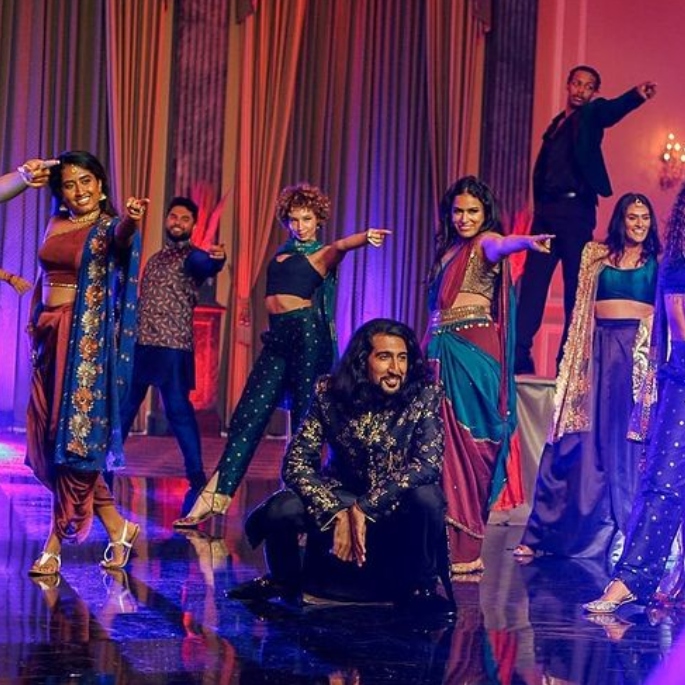 The video has more than 80 million views on YouTube and features Bollywood style dance sequences and even sees Jason performing Bhangra.

Megha Rao and her label holiCHIC provided costumes for the video which is one of the biggest TikTok songs of the year.

It has a mix of English and Punjabi lyrics and has surpassed an incredible 7 billion views worldwide.

The costumes on show include beautifully embroidered lehengas and colourful two-piece outfits.

These two pieces are a fusion look of eastern and western cultures with cropped blouse tops with embroidered trousers.

There are also hybrid shararas styled with sari style drapes. Zardozi work and gold accents also highlight parts of the outfit contrasting with the solid colour block of some garments. 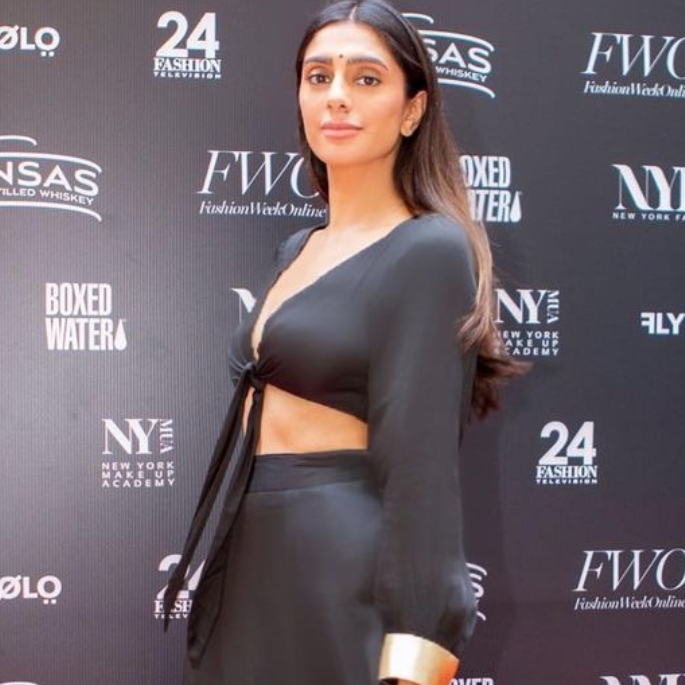 In September 2021 Megha Rao and holiCHIC featured in New York Fashion Week for the first time.

The womenswear and accessories that were featured were created using embroidery techniques that are centuries old. Speaking about being part of NYFW, Megha said:

“We want to showcase rich Indian textiles, fabrics, and designs on one of the most prestigious fashion runways in the world.

“I feel a sense of responsibility to showcase it at fashion week as a first-generation Indian-American.”

HoliCHIC showcased eight looks on the runway and they all embodied the ‘New York meets Mumbai’ motto that Megha based the label on. It was the denim sari that captured the audience, perfectly merging east and west.

“This sari, that skyline. For a second I felt like it wasn’t even real life. When I thought about the opening look for the show I wanted to ensure it represented the brand and everything we stand for.

“I couldn’t think of a more appropriate concept than Sari Denim. A concept that is so personal to me and one that symbolizes such a strong sense of collaboration and unity.

“We’re not just creating garments in India; we’re making sure the designs you see on stage represent the heritage & culture we’re so proud of.

“My dream has always been to see a sari showcased on the NYFW runway, now is the opportunity to make that dream a reality.”

The appearance at New York Fashion Week has only further solidified the presence of Megha Rao and holiCHIC in today’s fashion world. 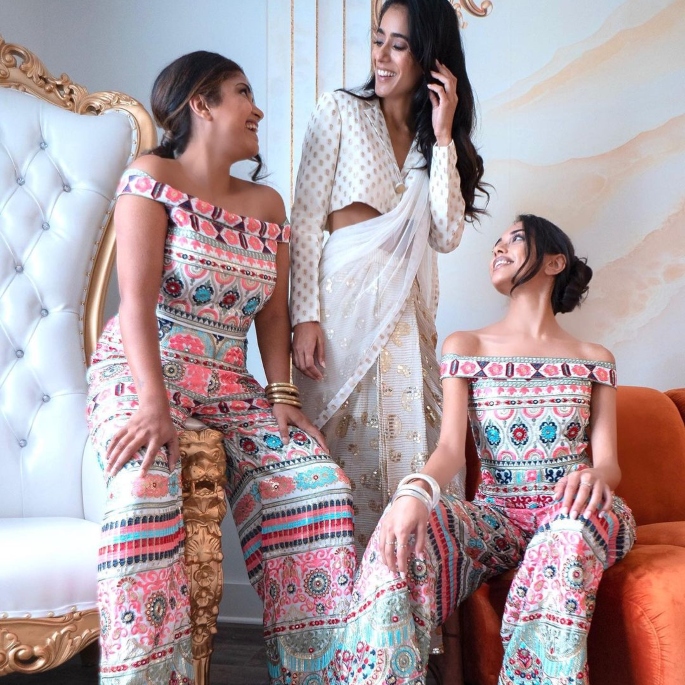 This new line is colourful and bright and features various embroidery techniques including mirror and thread work.

The everyday line has everything from flowing maxi dresses and smart blazers to georgette kimonos and tie-dye midi dresses.

Her runway pieces are perfect for wearing to special occasions without breaking your bank balance.

There are embroidered lehengas, kaftan dresses and jumpsuits all of which continue to embody the east meets west fusion style. With so many styles on offer, Megha Rao does well to cater to a variety of tastes.

The oversized saffron sari blazer with gold motifs is a standout piece and perfect to dress up or down. A deep green sari dress with an attached shoulder drape looks exotic but is easy to wear.

Megha Rao created the new ‘Made in India’ collection with the upcoming holiday season in mind. The outfits are perfect for any party from Diwali fireworks to Christmas drinks.

On unveiling the collection Megha declared:

“I considered the types of events we may attend (Diwali, holidays, office parties) and wanted to create designs that would allow us to celebrate our beautiful culture at ANY type of event.

HoliCHIC is the perfect experimental and fusion style. Megha Rao’s vision for the brand has fully come to life. She has managed to create versatile styles that are fit for any occasion.

With NYFW on her CV and designing for music videos, the label is going from strength to strength. Her vision for the future is for the brand to appear in retail stores worldwide.

The way things are going, it is only a matter of time before Megha makes that dream come true as well.

You can shop the entire holiCHIC collection here.