Manish Malhotra is a multi-award winning Costume Designer, Stylist and Couturier who has been leading from the front with his creativity and magnificent collections.

“I am proud that I have set a new trend in design for films.”

Manish Malhotra is a leading name linked inextricably with the Indian fashion industry. In a fashion career spanning over eighteen years, Manish has worked with every top director and artist in the Bollywood film industry.

He describes his Bollywood forte as “an entire, integrated look for a character throughout a film.”

His skill as a designer has won him clients outside of the film genre, with NRI’s [Non-resident Indian] patiently seeking appointments with him. Within the industry, his formidable reputation ensures that he accompanies clients abroad on location shoots.

Manish is the youngest son of a middle class Punjabi family, which migrated from Pakistan and settled in Mumbai during the partition of India. Manish Malhotra’s fascination with clothes and films was inborn: 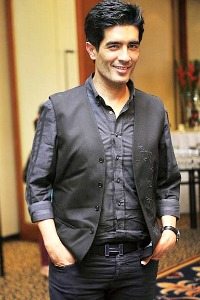 “I am very observant, a movie buff, and interested in fashion since childhood. I get ideas from travelling, from movies, foreign magazines, and anything can spark or inspire ones creativity,” reveals Manish.

At fourteen when his brother got married, he showed a lot of interest in the clothes his mother wore and the jewellery for the wedding. Therein started his tryst with clothes, fashion and in short creating a look.

While studying at Elphinstone College in Mumbai, Manish made a successful foray into modelling with major ad campaigns for popular brands like Fu’s, Weekender, Frooti and Goldspot.

For a year he worked at Equinox, a boutique in Bandra, Mumbai and also hired two tailors and worked out from home.

Manish made his entry into Bollywood when he designed three outfits for Juhi Chawla in one day for David Dhawan’s Swarg [1990]. His real break came when he designed a few costumes for Sri Devi. Later on he got several orders for outfits from Bollywood stars. 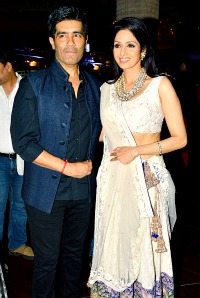 During this period he had started compiling files on every heroine and created a special ‘look,’ for them according to the film brief. In 1995, he completely changed Urmila Matondkar into a raging sex symbol in Rangeela, designing daringly different costumes for the film.

He repeated the magic when he gave Karisma Kapoor a complete makeover in Raja Hindustani [1996].

Ask Malhotra what he has brought to film fashion and he’ll tell you what he has taken away from it. “Minimalism is what was needed and I think I brought that in. Whether it was big hair, big make-up, or big jewellery, the overall trend in fashion was less is more,” Manish says candidly.

He adds: “I am proud that I have set a new trend in design for films.”

In 1998, he ventured into mainstream designing and started Reverie, his high profile couture. 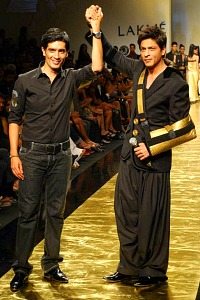 Malhotra’s debut fashion show held in November 1999 received a standing ovation from everyone. The gifted designer sold almost 70 per cent of his clothes within three weeks.

In 2001, Mumbai’s Sheetal Design Studio unveiled his Enchanted Ensemble Collection with its elegant and impeccable finish. This collection was inspired by William Shakespeare’s play A Midsummer Night’s Dream.

In 2004, he launched his diffusion label Manish Malhotra, which gave a platform to express himself further. Original garments under the label can be purchased from his flagship store in Mumbai, and are also available across outlets in India.

His international stores include Studio 8 in Dubai, Rivaage in Doha and Aashni and Co. in London.

His desire to constantly reinvent himself led him to host The Manish Malhotra Show on Zoom Channel in 2005. The talk show featured celebrity guests, fashion and style tips.

His work has been hugely appreciated and has received several accolades. He won the first Filmfare Best Costume Design Award for Urmila’s look in Rangeela [1995].

Subsequently he was awarded the Showtime Opinion Poll Award for Raja Hindustani [1996], the Siemens Viewer’s Choice Award for Dil To Pagal Hai [1997] and the Bollywood Award for Kuch Kuch Hota Hai [1998]. 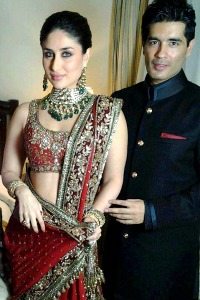 Manish was felicitated by the National Institute of Fashion Technology [NIFT] and the Indo-American society for his contribution to fashion designing.

He has also been honoured with the Indira Priyadarshini Memorial Award for his contribution to the fashion Industry and was named most Stylish Designer of the Year at the Elle Style Awards in 1999.

Malhotra’s favourite foreign designer is Giorgio Armani: “I love everything about him; the cuts, the colours, the suits. Even his stuff for women is very chic.”

“I also like DKNY for sporty stuff and women’s wear. I quite like Donatella Versace and Vivienne Westwood,” he enthuses.

Manish is proud of the fact that he designed a costume for Michael Jackson and Naomi Campbell picked up a pair of his embroidered denims in Mumbai. He has dressed famous personalities such as Demi Moore, Kate Moss, Kylie Minogue and Reese Witherspoon.

His creations were endorsed by popular Bollywood celebrities like Priyanka Chopra, Kajol, Urmila Matondkar and Parineeti Chopra who also walked the ramp for him.

Manish Malhotra has set a quality benchmark when it comes to fashion and style. There’s much more on the cards from the ace designer, including the possibility of one day writing a book based on his experiences.

Faisal has creative experience in the fusion of media and communication and research which increase awareness of global issues in post-conflict, emerging and democratic societies. His life motto is: "persevere, for success is near..."
The New Face of Sharons Couture 2013
Online Shopping Guide Summer 2013