McAfee Inc. the computer security specialists, have announced that searching and downloading ‘Katrina Kaif’ could be harmful to computers. Especially, in India. Because she is one of the most searched and downloaded stars from Bollywood on the Internet.

Katrina Kaif is mentioned specifically in a report called  ‘The Web’s Most Dangerous Search Terms’ published by McAfee.

For the report, McAfee searched for more than 2,600 popular keywords and for each keyword, they analysed the first five pages of results from each of the five major search engines – Google, Yahoo!, Live, AOL, and Ask. The 2008 ‘year end’ search reports were used for these search engines. They also used data  from Hitwise, a search intelligence company, which allowed a much deeper analysis of specific keywords to be conducted.

Katrina’s popularity on the web has risen to the point where cyber criminals can use her name as a front for cyber crime and infecting computers with viruses. For India’s most dangerous search terms, the analysis found that after ‘Waptrick’ (a download site), the search for ‘Katrina Kaif’ was most risky. The chart below shows the analysis results for India. 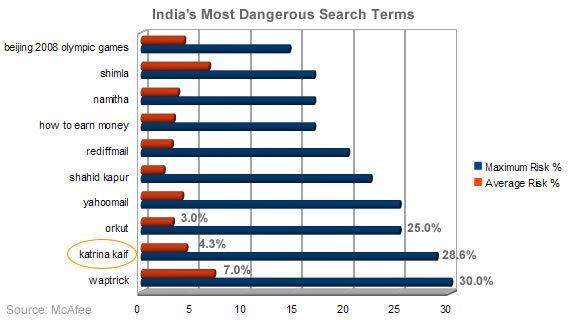 The report states that hackers are most successful when they can attract a large number of victims. By tracking current events, celebrities, popular music, natural disasters etc. is one key way for them to attract large crowds on-line.

A common tactic of many cyber criminals is to create pages and websites based on the most popular search terms of the time. Often, adware and malware ride along with the content of the site.  Screensavers and wallpapers offered for free download are another medium through which malicious code could end up on an unsuspecting user’s computer.

Jeff Green, the McAfee vice-president says, “Even before carrying out routine activities on the internet, one needs to be very careful as it has been becoming a place so risky with each passing day.”

“Like sharks smelling blood in the water, hackers will create related websites laden with adware and malware whenever a particular top increases in popularity,” he added.

The company revealed what were the riskiest terms in all the major countries including India, UK, USA, Canada, Brazil, Spain, France and China. For example, in the UK, most dangerous search terms include, ‘bebo’, ‘gordon brown’ and ‘hot uk deals.’ In the USA, ‘which had an extenisve analysis, terms included ‘ ‘word unscrambler,’ ‘lyrics’ and ‘music downloads.’ Canada’s   most dangerous terms include ‘pamela anderson’ and ‘jessica alba’.

The report concluded that although time-scales of scams may vary, new scams are emerging every week to take the place of old ones. And it is extremely important that users do not ignore these kind of findings and to combat them they  install powerful computer security suite software.

There are many good Internet security suites available. Top rated ones include, BitDefender, Kaspersky, Zone Alarm, Webroot, Bullguard and McAfee.

So, next time you are surfing and searching for your favourite Bollywood stars always think twice before you click on any and every site you find in your search results.

Visit our downloads section for Katirna Kaif goodies including wallpapers and a specially created StarPix widget!

Amit enjoys creative challenges and uses writing as a tool for revelation. He has major interest in news, current affairs, trends and cinema. He likes the quote: "Nothing in fine print is ever good news."
1970’s Bollywood Beauties
Bollywood and Multiplexes End Strike