Bollywood actress Kangana Ranaut often speaks publicly about various subjects. Now, she has had her say on Aamir Khan and Kiran Rao’s divorce.

"this practice is archaic and regressive…"

Khan and Rao shocked the world on Saturday, July 3, 2021, when they revealed their plans to separate.

The pair said their decision to divorce is a mutual one, and they will continue to co-parent their son Azad.

Kangana Ranaut is known for speaking her mind on social media about various subjects.

Now, she has had her say on Khan and Rao’s divorce, bringing a level of controversy to an otherwise civil announcement.

She questioned why someone must change their religion when marrying a Muslim. She also spoke about the circumstances around raising children in an interfaith marriage. 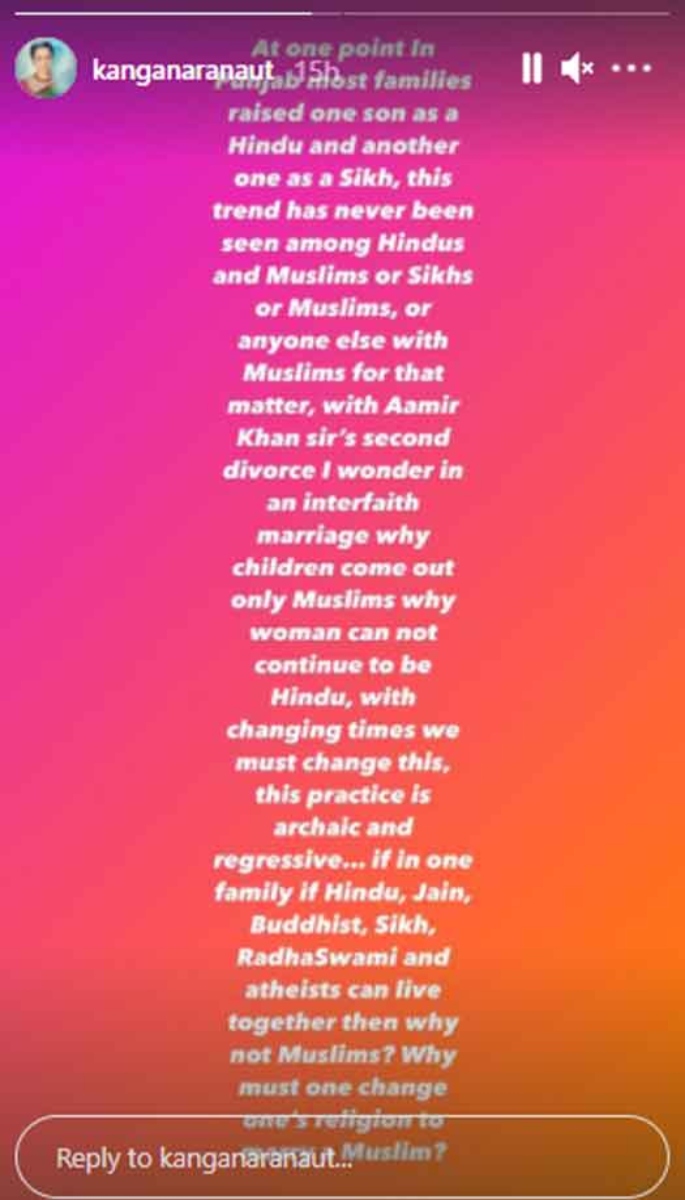 “At one point in Punjab, most families raised one son as a Hindu and another one as a Sikh.

“This trend has never been seen among Hindus and Muslims or Sikhs and Muslims, or anyone else with Muslims for that matter.

“With Aamir Khan sir’s second divorce I wonder in an interfaith marriage why children come out only Muslims why women can not continue to be Hindu.

“With changing times we must change this, this practice is archaic and regressive…

“If in one family if Hindu, Jain, Buddhist, Sikh, RadhaSwami and atheists can live together then why not Muslims?”

“Why must one change one’s religion to marry a Muslim?”

“In these 15 beautiful years together we have shared a lifetime of experiences, joy and laughter, and our relationship has only grown in trust, respect and love.

“Now we would like to begin a new chapter in our lives – no longer as husband and wife, but as co-parents and family for each other.

“We began a planned separation some time ago, and now feel comfortable to formalise this arrangement, of living separately yet sharing our lives the way an extended family does.

“We remain devoted parents to our son Azad, who we will nurture and raise together.

“We will also continue to work as collaborators on films, Paani Foundation, and other projects that we feel passionate about.

“A big thank you to our families and friends for their constant support and understanding about this evolution in our relationship, and without whom we would not have been so secure in taking this leap.

“We request our well-wishers for good wishes and blessings and hope that – like us – you will see this divorce not as an end, but as the start of a new journey.

“Thanks and love, Kiran and Aamir.”