“My heart! Fairytales do come true.”

Pakistani model Hasnain Lehri has seemingly announced he is in a relationship with Dubai Bling star Loujain ‘LJ’ Adada.

Taking to Instagram, Hasnain posted a loved-up picture with her. The black-and-white photo featured the model kissing a smiling LJ.

“I thought fairy tales would never come true until I met my princess.”

The romantic hints went even further went LJ replied in the comments section.

The reality star wrote: “My heart! Fairytales do come true.” 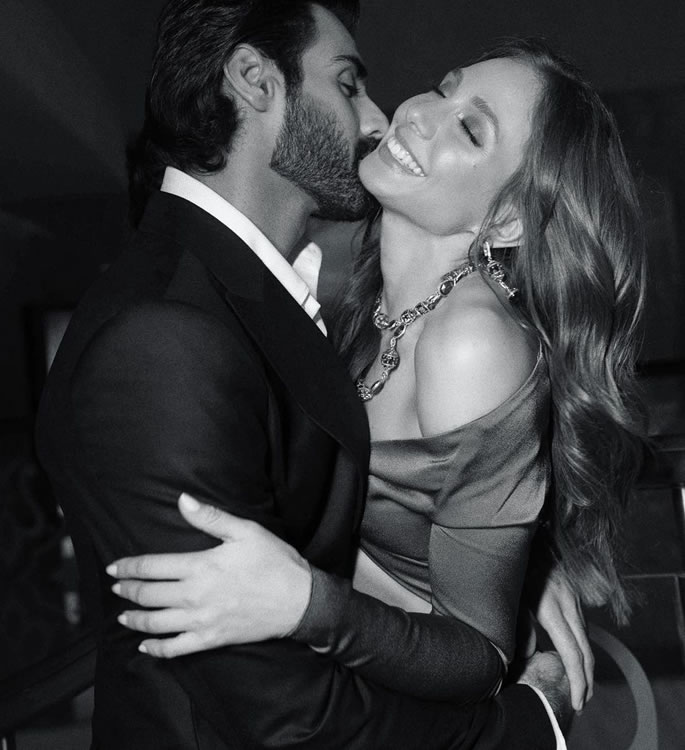 Celebrities like Anoushey Ashraf, Fahad Mirza, as well as models Fatima Hasan and Mehreen Syed also commented on the post to congratulate the model.

One user wrote: “Hasnain Lehri with LJ how tf I have so many questions…”

Another fan commented: “Omg Hasnain Lehri got LJ… How… How.”

A third said: “When did this happen? All the best.”

Followers of Hasnain have now begun to speculate whether he will feature in the next season of the Netflix hit series, Dubai Bling.

One comment said: “So are you coming in the next season of Dubai Bling.”

Hasnain Lehri is one of Pakistan’s leading men’s fashion models.

Due to his attractive looks and charisma, he has a significant fan base.

All Pakistani fashion houses and foreign brands advertise their favour Hasnain over all others.

In the past, Hasnain and supermodel Sabeeka Imam dated for a period and have been previously linked on different occasions.

Loujain Adada had been married to the late Saudi billionaire Walid Ahmed Juffali.

She was 25 and her husband was 60 when they got married.

Prior to Walid’s untimely death from cancer in 2016, the couple had two daughters together.

Fans have been curious about Loujain’s first marriage, particularly when Loujain addressed those who have repeatedly dubbed her a gold digger.

Although Loujain has been referred to as a gold digger since she wed, the Dubai Bling star has made it obvious that she loved Walid.

On the Netflix show, LJ stated that although her husband’s multibillion-dollar enterprise was a benefit, it wasn’t the reason she chose to marry him.

After her husband’s death, LJ has frequently uploaded pictures and tributes to Walid online. On the sixth anniversary of his death, she released a picture from their wedding.

Although Hasnain has seemingly announced his new relationship, LJ is yet to do the same.

Ilsa is a digital marketeer and journalist. Her interests include politics, literature, religion and football. Her motto is “Give people their flowers whilst they’re still around to smell them.”
Top 10 Most Controversial Pakistani Films
Priyanka Chopra details Dark Side of Bollywood Career