Indian Student raped and killed in US for Ignoring ‘Catcalls’

A court heard that an Indian student living in the United States was raped and killed after she ignored a man’s ‘catcalls.’

"The defendant was angry that he was being ignored."

A US-based Indian student was raped and murdered for ignoring a man’s catcalls, according to prosecutors at Cook County Court, Illinois.

Donald Thurman, aged 26, was arrested and charged with first-degree murder and criminal sexual assault after the body of 19-year-old Ruth George was found on November 23, 2019.

The University of Illinois at Chicago (UIC) student was found “unresponsive” in the backseat of her family’s car after they reported her missing to campus police.

Prosecutors said that Thurman saw Ruth across the street and started catcalling her. The young woman ignored him and carried on walking.

“The defendant was angry that he was being ignored. The defendant came up behind the victim, grabbed her around the neck from behind, and put her into a chokehold.

“With his arms still wrapped around the victim’s neck the defendant dragged the victim from the ground and he opened her back seat car door.”

Thurman then allegedly raped Ruth with a condom on while she was unconscious.

Thurman lived near the campus but was not a student and did not know the victim. He allegedly admitted to the crime hours after he was arrested.

Surveillance cameras showed Thurman walking behind the Indian student as she entered the garage at around 1:35 am on November 23.

After half an hour, he was spotted fleeing from the scene.

Campus police were contacted at 11 am by Ruth’s parents, saying that they had not heard from her in two days.

Police said the student’s phone “pinged” off a Halstead Street garage on campus where they discovered her body in the backseat of the vehicle.

On November 24 at approximately 2 am, Thurman was arrested and questioned. According to the authorities, he “gave a full confession to this horrific crime” after 12 hours of questioning. 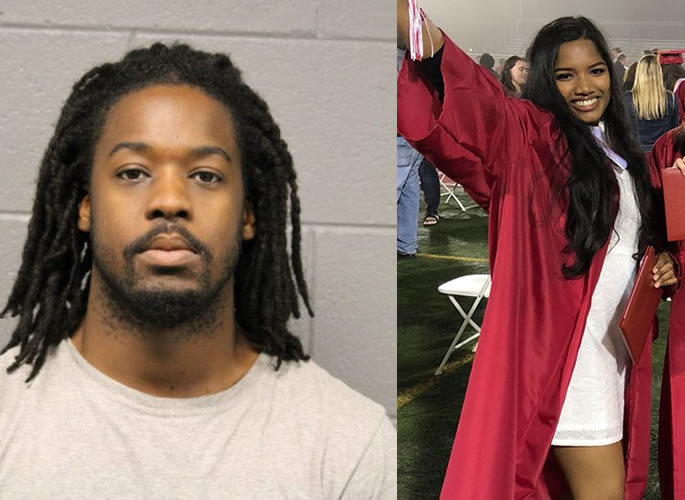 Ruth’s family revealed that they hold “no hatred” towards her alleged killer as they “grieve with hope.” In a statement, they said:

“Our hope is no other girl would be harmed in this way and for a mother to never experience this type of heartache.

“Ruth lived out her deep faith in Jesus by loving and serving others, leaving a legacy of Christ-centered kindness and sacrifice. She was the beloved baby of our family.”

Thurman’s lawyer argued that the defendant was homeless with a history of childhood abuse and suicidal thoughts.

The suspect was denied bail and was remanded in Cook County jail.

UIC students hung yellow ribbons around the campus in memory of the Indian student, who was nicknamed “Baby Colour.”

UIC Chancellor Michael Amiridis paid tribute to Ruth, who dreamt of being a health professional. He said:

“It is very difficult to find words that can express the sadness our entire community experiences today following the news of the tragic death of a 19-year-old undergraduate student.

“We offer our sincere condolences to the student’s family and friends and I know that all of us have them in our hearts as they struggle with this devastating loss.”

On social media, Ruth’s friends and family said she was “the sweetest person” with the “brightest smile.”

Her sister Esther George posted: “She was the light of our family and the best of all of us.

“She was wise beyond her years and now she is gone [too] soon. God give us peace.”

“It’s sad, it’s tragic. To see something like this at a campus like this, it’s just sad to see.”

“I just hope that he gets what he deserves. I hope justice is served.”

“It’s very shocking because I don’t really hear things that often happening at this campus, but like I said, this is Chicago.”

Thurman was on parole after serving two years of a six-year sentence.

ABC7 Chicago reported that in 2016, he stole a woman’s phone before fleeing in a stolen vehicle. He was released in 2018.

Dhiren is a journalism graduate with a passion for gaming, watching films and sports. He also enjoys cooking from time to time. His motto is to “Live life one day at a time.”
Pakistani Woman blatantly abuses Traffic Officers after Violation
Brothers hid £12,500 Drug Money under Sleeping Mother