On International Men’s Day, social media was alive with Indian men speaking out about the emerging false accusations they face from women.

“#SaveMen from these type of #women”

On International Men’s Day, November 19, 2022, men in India are speaking out online about the abuse they have faced as a result of the actions taken by women.

Taking a twist on the worldwide #MeToo movement which explores violence against women by men, men have begun the #MenToo hashtag on Twitter.

The main topic of conversation caused by the hashtag for men in India is women who accuse false allegations against men.

This causes issues such as legal complications, poor quality of life, being shunned from society, and negative mental health.

Evidence of the impact of false allegations was shared on Twitter in a distressing video retweeted by @BakraofDv.

The video showed a couple seeking counsel from a third party who was a woman.

In the video, the woman seen wearing a red shalwar kameez begins to ask the wife in question what her quarrels with her husband are.

In response, the woman alleges that her husband has physically abused her.

To this, the third party begins to insult and repeatedly slap and verbally degrade the husband in question – without investigating the domestic violence claim.

With obvious upset on his face, the husband claims innocence repeatedly, saying:

“#SaveMen from these type of #women”

Other men from India also shared similar sentiments about the damage false allegations can do to the lives of men.

Twitter handle @Jasbir7979 shared the following cartoon image of a woman who is purposefully drowning a male cartoon character into a bucket of what is assumed to be dirty false allegations.

This portrayal of false allegations gives insight into the distressing, and helpless impact on men. 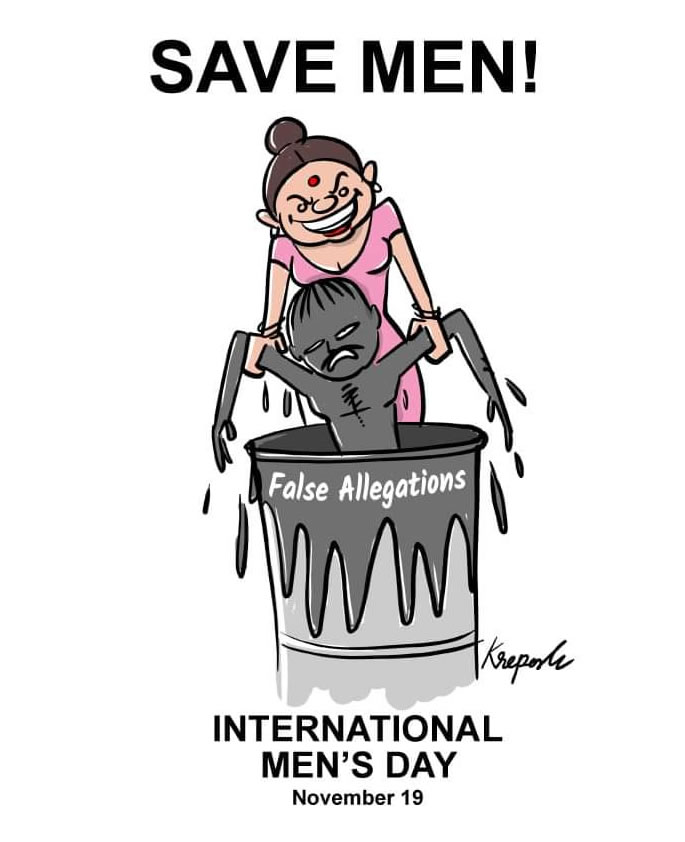 “Lordship, being a man you too deserve this day, ‘Happy International men’s day’!”

The comment has trolled Indian Prime Minister Narendra Modi who tweeted out in support of women on International Women’s Day but ignored marking the occasion for men.

In a tweet posted by ‘Victim Men’ Twitter handle, it shows an Indian man protesting against the abuse he has faced from his wife:

“She wants to enrich her family and brother by extorting money from me !!!”

The black and white image of a man looking away from the camera holds a placard addressing his situation. 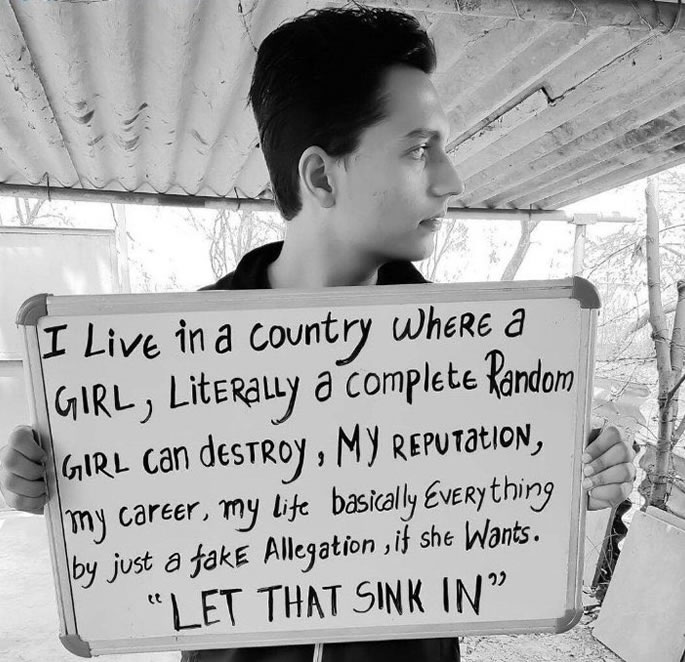 On the placard is written:

“I live in a country where a girl, a complete random girl can destroy my reputation, my career, my life, basically everything by a false allegation, if she wants.

However, Indian women have supported the cause spread by men online.

“Teach your daughters not to frame men for rape.”

Teach your daughters not to frame men for rape#MenToo

Men on Twitter have rallied together to bring awareness to the rise in false allegations by women.

Their aim is to bring sufficient awareness to the subject, in a similar capacity that violence towards women is discussed in the media.

The issue of false allegations is not specific to the type of relationship men have with women – abuse can be orchestrated by a mother, daughter, wife, girlfriend, sister, or friend.

An example of this is identified in Ghaziabad, India in 2017. According to reports, a girl accused her own father of rape.

On the command of the maternal uncle, a young girl lodged a false complaint.

The father was arrested by the police on the basis of a complaint and spent three years in jail for a crime he never committed.

Later during the trial, the daughter admitted that she had filed the complaint at the insistence of her uncle and that her father was innocent.

There are so many other cases like these involving wives and girlfriends using false allegations of rape, impotency, and even reporting them as being ‘gay’ to get the maximum financial return from ex-partners.

When it came to questioning the difference between men of today and the past, ForMenIndia tweeted an image and wrote:

“MEN, until you wake up, get united & actually start fighting and revolting, nothing is going to change.

“WOMEN DID THAT ONCE, AND WE CAN SEE THE RESULTS TODAY.”

“No offence but this is the scenario today. SUPPORT YOUR FRIENDS/BROTHERS DURING THEIR DIFFICULT TIMES.” 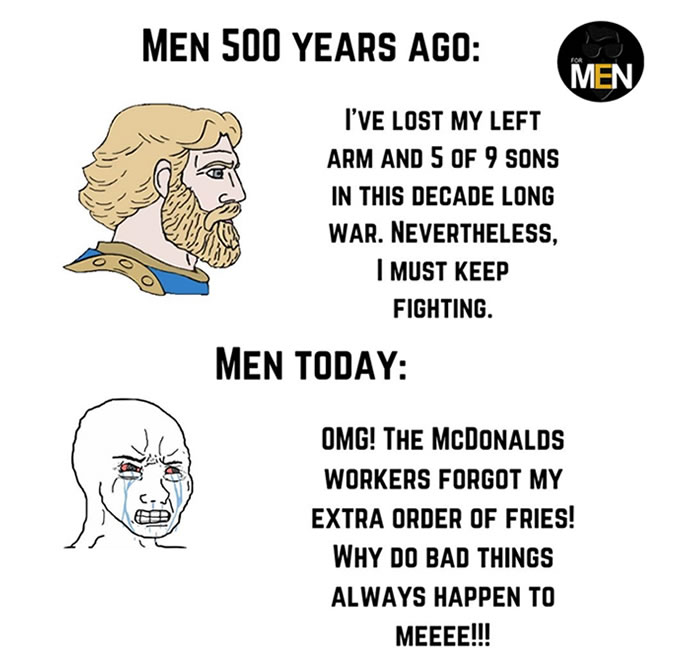 The world observes International Men’s Day on November 19 each year.

This day is devoted to bringing attention to the contributions that men make to society, to improving gender relations, and to promoting men’s health and well-being.

International Men’s Day is celebrated in order to encourage positive manhood across the different landscapes of men.

Additionally, it highlights the difficulties men encounter and the good contributions they make to society.

On this day, a number of campaigns, seminars, and other events are planned to raise awareness of men’s health.

In this instance, the sentiments of many Indian men seem to imply there is a growth in the distrust of women who are falsely framing them or accusing them of sexual harassment or abuse crimes.