Indian Man kills Friend and Chops Him into 200 pieces

Pintu Sharma from Mumbai has been accused of the murder of his friend Ganesh Kolatkar which resulted in him shockingly chopping his body into 200 pieces.

police say it is one of the 'rarest of the rare' cases.

An Indian man identified as Pintu Sharma, aged 42, has been arrested by police and accused of killing his friend, Ganesh Kolatkar, aged 58, and allegedly chopping him into about 200 pieces.

After murdering Kolatkar, who was going to get married soon, Sharma chopped his body and progressively over a few days and flushed the smaller pieces down the toilet, in an attempt to remove evidence of this savage killing.

The deranged murder was discovered after the flesh and bones of Kolatkar were found clogging and blocking the pipes at Sharma’s rented Virar residence and discovered at a nearby by sewerage plant.

On January 22, 2019, sanitation workers found dismembered fingers belonging to Kolatkar floating in a septic tank at Bachraj Paradise, Virar. In addition, residents at the seven-story building in Virar complained about the blockage of their drainage pipes.

Upon investigation, Deputy Superintendent Jayant Bajbale said they found and recovered nearly 30kg of flesh that Sharma had allegedly stripped using a hacksaw from Kolatkar bones.

Other larger body parts were discovered wrapped up in plastic bags and dumped along local railway tracks. Allegedly thrown by Sharma on his journey on a train back home to Santacruz, Mumbai.

Pintu Sharma, a married father-of-two, was then taken into custody accused of murdering Ganesh Kolatkar.

It was then revealed by police that Kolatkar was allegedly killed on January 16, 2019, in flat 602 on the sixth floor of the Bachraj Paradise Society building in Virar, rented a few months ago by Sharma.

The horrific murder and aftermath are said to have taken place over a financial dispute between the pair.

Pintu Sharma, an MSc-maths degree holder, met Ganesh Kolatkar about a year ago at his printing press and subsequently became friends.

Prior to the murder, on December 16, 2018, the friends met at the Virar residence of Kolatkar. It’s alleged that Sharma teased Kolatkar that due to him marrying so late in life, his wife might end up having extra-marital affairs due to him being so old. This added heat to the ongoing financial argument between the pair. 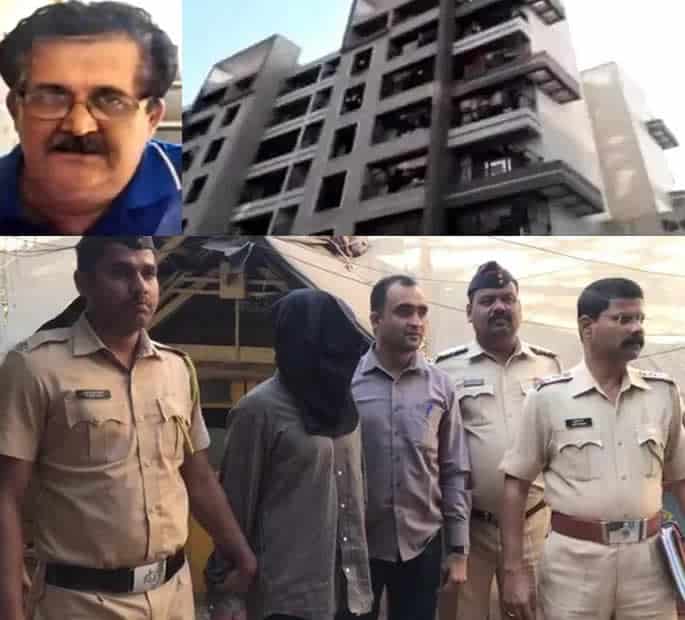 Police stated that Sharma loaned Rs 1 lakh to Kolatkar but after paying Rs 40,000 of his debt back to Sharma, he was finding it difficult to repay the outstanding amount.

Sharma then arranged a meeting with Kolatkar at the rented flat in Virar. He allegedly convinced Kolatkar to see him there and it was here he killed him in a cold-blooded murder by banging his head against the floor.

Then, he went onto doing the grisly deed of chopping his body up into the pieces.

Police say Sharma has denied killing Kolatkar and said during a brawl he just tried to stop him leaving the apartment and pulled him, which resulted in him in falling and dying on the floor.

In a panic, Sharma said he found a hacksaw which was already in the flat and chopped the body to avoid being blamed for his death. But police are accusing Sharma of having bought the hexa blade used to dismember Kolatka’rs body.

In addition to this killing, Sharma is also being linked to a second murder, that of a Borivali-based LIC sales officer, Arvind Ranade, aged 58, who has been missing since February 21, 2018.

A cousin of Ranade told the Mumbai Mirror that he “met with Pintu Sharma and the two drove down to Naigaon in Arvind’s car” and Arvind’s driver “dropped them near a building”, after which he has never seen been again.

The police investigation continues to gather evidence against Pintu Sharma for the alleged murder Ganesh Kolatkar and gruesome act to hide the killing.

The incident has shocked Mumbai and police say it is one of the ‘rarest of the rare’ cases.

Amit enjoys creative challenges and uses writing as a tool for revelation. He has major interest in news, current affairs, trends and cinema. He likes the quote: "Nothing in fine print is ever good news."
Two Human Traffickers jailed for ‘Laughable’ Smuggling Attempts
Imam jailed for Sexual Abuse of Two Young Sisters he Tutored