Mohammed Yousaf and Naweed Ahmed were both jailed for their attempt to smuggle illegal immigrants into the UK but failed due to a comedy of errors.

"Yousaf and Ahmed were the driving force behind this smuggling attempt"

Two human traffickers, Mohammed Yousaf, aged 45, and Naweed Ahmed, aged 36, both from Luton, Bedfordshire, were jailed for a combined 10 years at Portsmouth Crown Court for trying to smuggle immigrants into the UK but not without some blunders.

Compared to ‘Laurel and Hardy’ by their own lawyer, the two men trying to smuggle six immigrants failed epically to execute their human trafficking plan due to a series of very obvious mistakes.

These included putting their own names on the ferry tickets, making easily traceable phone calls and most ‘laughable’ of all they completely forgot to fill their van which was to be used for the smuggling with fuel, which had the Highways Agency then rescued.

In addition to these blunders, the pair involved, Wioletta Kossakowska, a mother-of-two, into the plan and ‘duped her with a false story’, who was cleared of charges against her after denying any direct involvement.

Yousef and Ahmed who were part of smuggling group, appointed her to drive a hired removals van to make a trip to France to pick-up furniture with the six immigrants, four men and two women from Afghanistan and Iraq, hiding inside.

Kossakowska’s ex-partner, Prezmyslaw Golimowski, aged 30, was also charged for setting-up the conspiracy with the duo and their smuggling group. But he was murdered in September 2018 in Bradford, so could not be part of the trial.

The court heard how the three of them, travelling in different vehicles, the van and a VW Passat, went to Calais in France and then to Paris and Caen to make the pickup.

While in France, Yousaf made calls to ‘The Boss’ in Switzerland, the man behind setting up the transfer of the illegal immigrants. He met Yousaf and helped load the van with the six immigrants in Paris.

Phone records as evidence showed the police the times of their actual communications and that Yousaf had to put his name on a ferry ticket.

On their way back, on January 5, 2017, after arriving off the ferry at Portsmouth, Border Force officers stopped Ms Kossakowska and the hired van she was driving with the immigrants in the back.

Officials found the five Afghani and one Iraqi illegal immigrants hiding in between furniture loaded into the van. 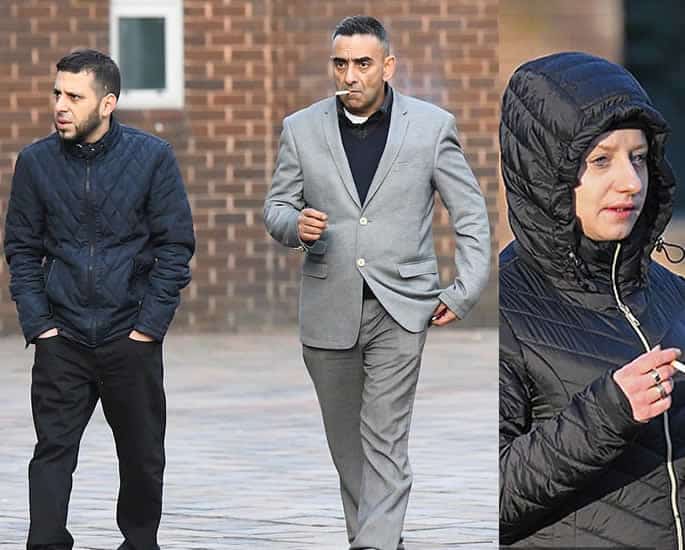 The duo was travelling behind her, in the VW Passat to avoid getting caught in the van. Oddly, Yousef had also never registered the car in a bid to stop it being traced back to him.

It was revealed that both Yousaf and Ahmed later offered Ms Kossakowska a cash bribe to not disclose their names them to police.

The pair, however, was subsequently arrested after the van was seized.

Prosecutor Timothy Moore highlighted that all other members of the smuggling gang had no evidence to prove their involvement or Mr Golimowski’s death.

The defence lawyer, Paul Webb, for Yousaf, said the duo’s smuggling trip was:

“Akin to a Laurel and Hardy farce rather than a highly sophisticated operation.”

Especially since the fact they were caught on their first attempt to smuggle the immigrants, which was dubbed as a “shopping trip”.

Judge Ashworth, who sentenced the paid said to Yousef:

“[Ms Kossakowska] was to drive the van on her own from Caen to Portsmouth ferry so in the event, as it transpired, that was stopped that you and Mr Ahmed would not be detected.

“You recruited other people, Mr Golimowski and Ms Kossakowska – Ms Kossakowska was duped with a false story by you. She was not trusted, she was watched.

“When you were stopped she was left on her own to carry the can whilst you attempted to escape and persuade her not to reveal your location.”

Ahmed and Yosef both denied the charges but were found guilty and convicted of six charges of conspiring to facilitate the entry of non-EU citizens into the UK.

Yousaf was jailed for six years and Ahmed, who has 12 convictions for 21 offences, was given three-and-a-half years in prison.

“Thorough investigation from my officers established that Yousaf and Ahmed were the driving force behind this smuggling attempt.

“It also exposed the cover story of an innocent shopping trip for the tissue of lies that it was.”

Border Force assistant director at Portsmouth, Dean Oughton, said: “This is an example of the intelligence-led work of my officers proving to be the vital first step ultimately leading to convictions.”