A 35-year-old man has been arrested for marrying a 6-year-old child bride in order to live with his lover, as stated by the ancient custom of Nata Pratha.

"We found Ratan Lal had married a minor to follow age-old customs."

A 35-year-old man has been arrested for marrying a 6-year-old girl in West India to follow the ancient tradition of Nata Pratha.

The ceremony reportedly took place on June 23, 2015 in Rajasthan in the company of five witnesses.

It is believed that Ratan Lal Jat was involved with a married woman and wanted to move in with her.

But this is only allowed if both Ratan Lal and his lover are married to other people, and the man is also required to pay money to the married woman as compensation.

So he followed Nata Pratha – a common custom in parts of Rajasthan, Gujarat and Madhya Pradesh – in order to be with his lover. 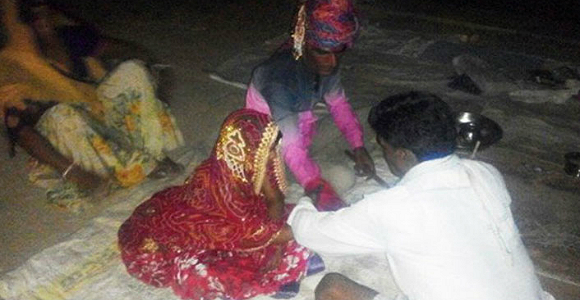 Ratan Lal, an elected representative of Panchayat Samiti, allegedly gave money to the young girl’s family to marry her in a secret ceremony.

He said: “When the incident came to our notice, we dispatched a team headed by the sub-divisional officer.

“But when they reached the spot, there was no one there. And on these matters, villagers don’t speak out.”

Then on June 26, images of the wedding began to appear on Whatsapp and made its way to social media. Local authorities in India were alerted and arrested Ratan Lal for marrying a child bride.

Gangrar Inspector Gyanendra Singh said: “We learned about the incident when the pictures of the wedding started circulating on social network apps.

“We managed to get hold of the pictures and we sent a team to investigate the matter. We found Ratan Lal had married a minor to follow age-old customs.

“But for us it is a clear case of child marriage and we arrested Ratan Lal Jat under the Prohibition of Child Marriage Act 2006.”

Ratan Lal’s marriage broker, Jamuni Bai, has not yet been captured. According to local police, he is notorious for arranging illegal marriages with child brides for around £350.

Inspector Singh emphasised the police have launched an operation to locate him and all the witnesses at the ceremony.

The young girl is reportedly still living with her family after the marriage.

District Collector Prakash stated the case would be presented to the local court, so that the illegal marriage could be declared null and void. 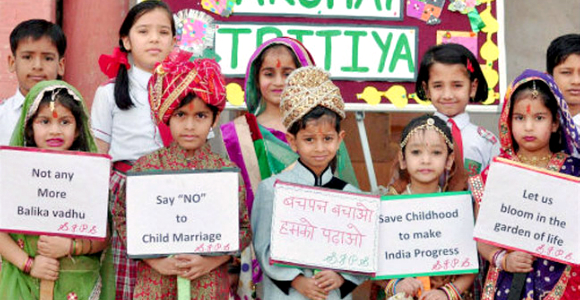 Child marriages remain illegal yet prevalent in the rural parts of India.

“It was only when I grew up that I realised what had happened. I want to study and become a teacher. I don’t want to go there.”

In India, girls under the age of 18 and boys under 21 are protected by the 2006 Prohibition of Child Marriage Act from entering into illegal and non-consensual marriages.

With over 47 per cent of young girls in India being married off against their will before turning 18, it is going to take a lot more than the law to address the deeply-rooted practice.