The colourful Gond art of tribal India is rich with cultural heritage. DESIblitz takes a closer look at its history and evolution.

Gond is an elaborate form of visual storytelling.

The Gond people are one of the largest tribal groups in India, with a population exceeding 12 million.

Their origins can be traced back nearly 1,400 years to the pre-Aryan period and have a wealth of cultural legacy that is reflected in their art.

Famous for its vivid style and detailed storytelling, much of Gond art’s history is evident in the paintings themselves.

It originates from Madhya Pradesh but is also considerably familiar in Andhra Pradesh, Maharashtra, Chhattisgarh and Orrisa.

However, the beauty and simplicity of Gond art have charmed people all over the world and today it can be found in all types of places. 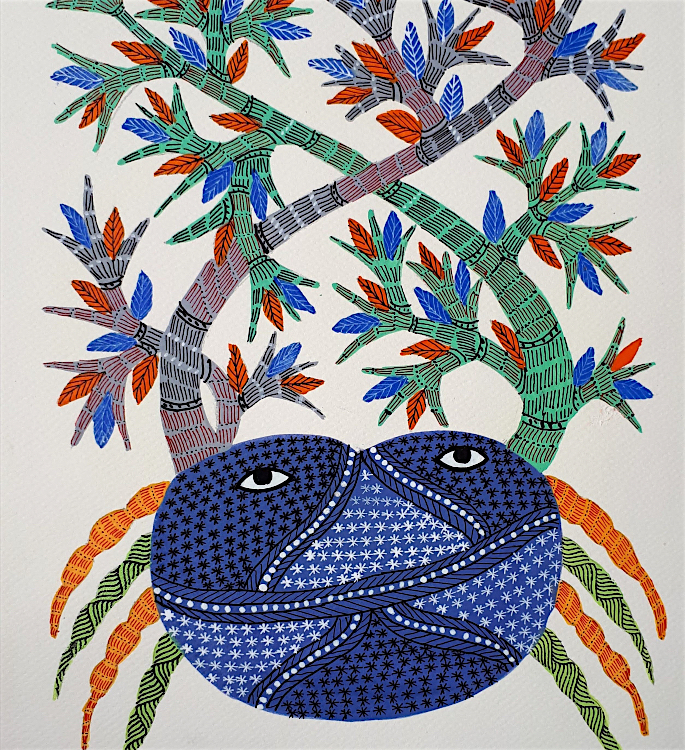 Gond art has become a popular form of modern painting but traditionally it was used to decorate the mud walls and floors of tribal houses.

One of Gond art’s most striking features is its use of bright and vivid colours.

The Gond tribe believe that seeing a positive image brings good luck to the viewer. They animate their paintings with vibrant reds, whites, blues and yellows to make them stand out.

The word Gond comes from the Dravidian expression ‘Kond’, meaning ‘the green mountain’.

The majority of the Gond tribe live in the lush green mountains of Madhya Pradesh. Gond art celebrates the close connection between man and nature in several ways.

Traditionally, painters derive colours from natural sources in the vicinity of their homes.

Black paint is made from charcoal, red from geru soil, green from leaves and yellow from the ramraj soil around the Narmada river.

Even cow dung is used to obtain a light green colour. The Gond tribe respect and embrace their surroundings.

They believe all natural objects, whether animate or inanimate, have a sacred spirit of their own.

They often paint lakes, trees, hills, rivers and rocks as a way of showing reverence for nature’s strong spiritual presence in their everyday lives.

Another unique feature of Gond art is its use of geometric patterns.

Artists will fill in a simple outline with patterns such as fine lines, dots and dashes until the entire image is saturated with colour and texture.

Such skill and patience endow each still image with a dynamic sense of movement that celebrates their long-standing animist beliefs.

Gond artists always begin by sketching an outline. This outline is then split into sections, each of which is filled in with different patterns.

When painting an animal, human or mythological figure the eyes are always filled in last. It is believed that giving sight to an image breathes life into the work.

While Gond art revolves around forms of nature, it also depicts the daily lives of the Gond people.

Paintings can represent myths, rituals, festivals and even abstract concepts like emotions and dreams.

Above all, Gond art is an elaborate form of visual storytelling. From the epic legends of kings to folk tales about ants, Gond art documents all aspects of Gond lifestyle.

While the Gond tribe have a strong sense of community, they do not lack individuality. Within the unique form of Gond art, each artist develops an even more personalised style to reflect their own aesthetic.

Different artists gravitate towards different themes, colours and patterns, creating their own signature style over time.

Much like a folk story, the simple tradition of Gond art has been passed down through generations.

While it is expressed through the common medium of natural paint, the same story is told in so many different ways that are unique to each artist.

It is this fluidity that has allowed the art form to not only survive, but flourish in the modern age. 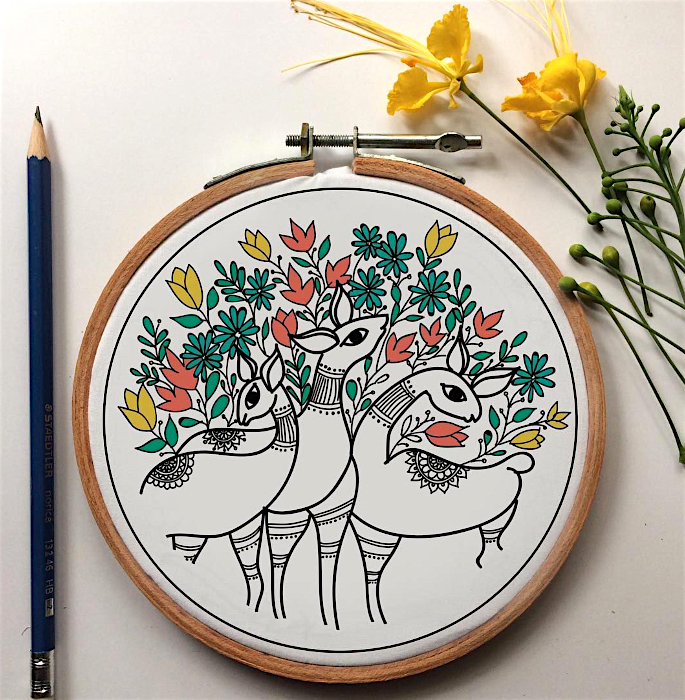 Up until the 1980s, Gond art was unheard of outside the Gond tribe. Today, it is displayed in not only galleries but an ever-expanding range of contemporary products.

Plates, mugs, shopping bags, t-shirts, stationery; these are just some of the items that demonstrate Gond art’s irrefutable place in mainstream culture.

YouTube is home to thousands of video tutorials for beginners to practice Gond art.

Its worldwide popularity has led the Indian government to launch numerous programs to preserve its heritage for future generations.

Much of its popularity is attributed to Jangargh Singh Shyam, the first Gond artist to paint on paper and canvas instead of walls.

His reputation spread rapidly and after exhibiting his works at Bharat Bhavan, a prestigious art institute in Bhopal, he began to attract global attention.

Jangarh has inspired a legacy of Gond art.

Contemporary paintings are even more vibrant than their traditional forms due to a shift in resources.

In 2010, the Must Art Gallery was founded. It is the first art gallery dedicated to indigenous Indian art, of which Gond art occupies a large space.

Much of what makes Gond art so appealing is its fascinating balance between the past and present.

Artists are careful to protect and preserve Gond tradition, but at the same time use their skills to depict modern life.

Jangarh’s daughter, Japani Shyam, is also a Gond artist and is very aware of this fine balance.

“Though Gond art is a tribal art form, it has always progressed towards something new”, she stated in a 2019 interview.

While Gond art has undoubtedly grown into a global art form, it still manages to maintain unwavering respect for its traditional roots.

Aayushi is an English Literature graduate and published writer with a penchant for pithy metaphors. She enjoys reading and writing about the small joys in life: poetry, music, family and wellbeing. Her motto is 'Find joy in the ordinary.'
The Importance of Art in South Asia
Mahatma Gandhi’s Glasses sell for £260k at Auction