Indian business tycoon B. Ravi Pillai splashes over £5.5 million on a glamourous wedding for his daughter, Arathi. We brings you the full story and photos!

The wedding set design was inspired by Bahubaali: The Beginning.

Indian entrepreneur and billionaire, B. Ravi Pillai, hosted the most extravagant wedding for his daughter Arathi.

She married Aditya Vishnu, a doctor based in Kochi, in a film-inspired celebration on November 26, 2015 in Kollam, Kerala.

Dressed in a vibrant and delicate design by Manish Malhotra, no one could steal the limelight from the beautiful bride.

The wedding was practically oozing wealth, with an estimated cost of Rs 550 million (£5.5 million).

This wasn’t surprising once you know the flamboyance of the set designs – inspired by Bahubaali: The Beginning (2015) and the royal palaces of Rajasthan. 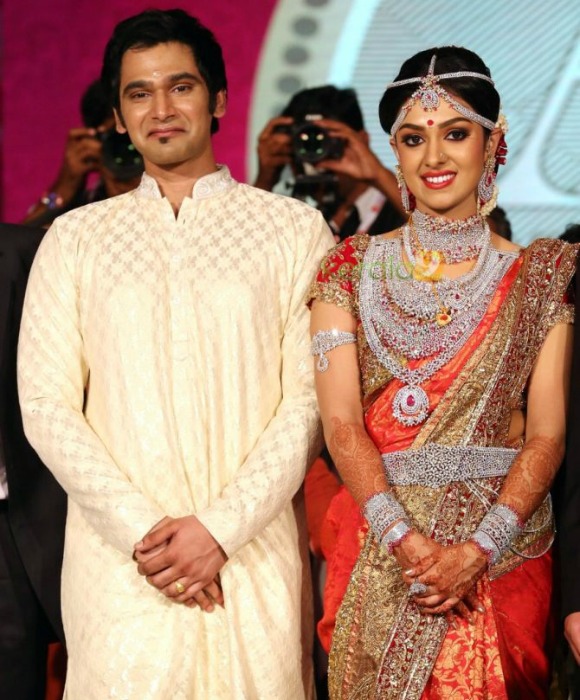 Sabu Cyril, who headed the production design of the blockbuster film, was lead designer of the wedding set. We can see why it was so marvellous now!

The wedding pandal took around 75 days to build and spread across a staggering eight acres of land.

Sabu said: “Various parts for this set were first moulded in clay in Mumbai, and then it was cast in plaster of Paris.

“It took us about 40 days to assemble the pre-fabricated structures here.”

There were over 30,000 guests from 42 countries who attended this spectacular event, including members of the royal families of Qatar.

They ranged from film personalities, politicians, CEOs and even representatives from companies such as Samsung and the Japan Gas Corporation! Movie stars Mohanlal and Mammootty also graced the celebration. 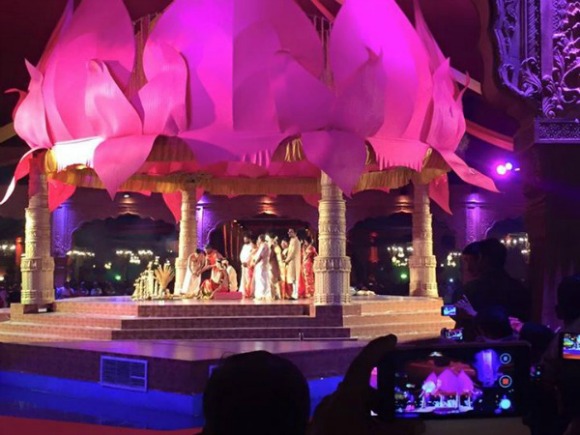 The amount of money spent of this wedding can only be justified by an extremely wealthy man.

B. Ravi Pillai is an astound business man, with an empire spanning over 26 companies and consisting of 80,000 employees. Many of these companies are active in construction, mining, education and infrastructure.

Singer Gayathri opened the larger-than-life wedding party, followed by a Kuchipudi performance by Manju Warrier and a Bharatanatyam dance by Shobhana.

Pillai also arranged for security to be at the wedding, which included around 250 policemen and 350 private detail cops. 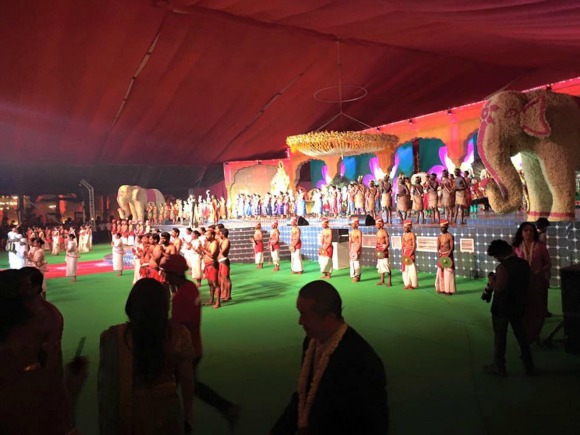 And of course, what is a wedding without an eccentric food selection?

The menu for this wedding combined traditional sadhya with ten payasams. A selection of international cuisine was also available for the VVIPs (very VERY important person) who flew in from around the world.

The joyous occasion continued in another reception in Ernakulam on November 28, 2015 where extravagance was taken to the next level with a live music concert by Rimi Tomy and Vidhu Prathap.

We wish many congratulations to the happy couple! It’s certain their marriage has started with an extraordinary celebration!