Miss Universe Harnaaz Sandhu appeared on ‘The Daily Show’ and she added a Bollywood touch by teaching some dance moves to host Trevor Noah.

For her appearance on the American talk show, Harnaaz looked glamorous in a red corset bodycon dress from Wight Elephant Boutique.

The dress had a drop-shoulder and pleated neckline, corseted front that accentuated her curves and an asymmetrical hem.

Harnaaz contrasted the bright red with a pair of silver heels. 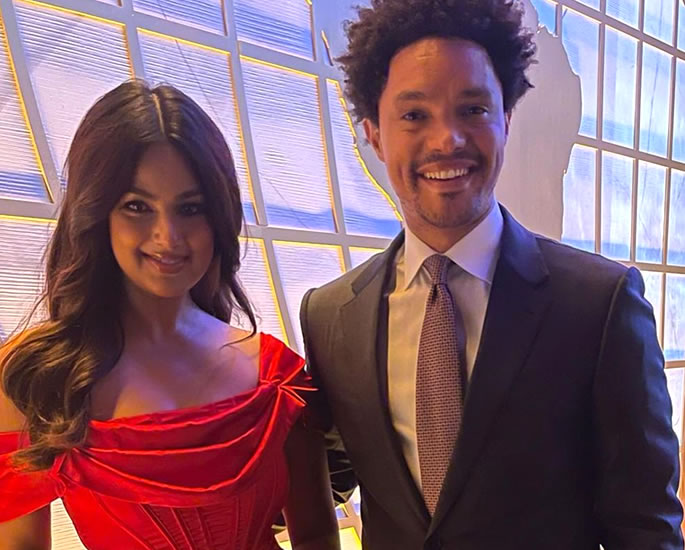 Harnaaz shared a short video from her time on the show where she is seen teaching Trevor Noah some simple dance moves.

The pair get up from their seats and take to the floor, where Harnaaz tells the host:

Harnaaz continues: “Bollywood is all about face, neck, hands and hips. It’s gonna be easy. Trust me.”

Trevor copies the beauty queen’s moves and is met with cheers from the audience.

Struggling to grasp some of the moves, Harnaaz instructs:

Trevor then jokes that he has to loosen his hips before Harnaaz says they will perform the dance moves faster.

Harnaaz does the dance moves while Trevor tries his best but struggles to keep up with the pace.

Trevor is applauded for his efforts and he tells the audience that he will practice the moves backstage.

The video was loved by Harnaaz’s fans, with many saying they were excited to watch the episode.

Another wrote: “Will definitely be watching.”

A third commented: “Omg Trevor! That went really smoothly. Queen for a reason.”

One person said: “It’s always fun to watch Trevor! So excited for this episode.”

Some were happy that Harnaaz was representing India on the international stage.

Others also expressed their delight by posting heart and fire emojis.

“It was such a pleasure to share the stage with one and only Trevor Noah.

“Thank you The Daily Show for having me on your show!

“Trevor Noah, remember it’s all in the hips! Bollywood is watching!”

Harnaaz’s appearance on The Daily Show excited fans when the Miss Universe Instagram account announced that the beauty queen would be a guest. 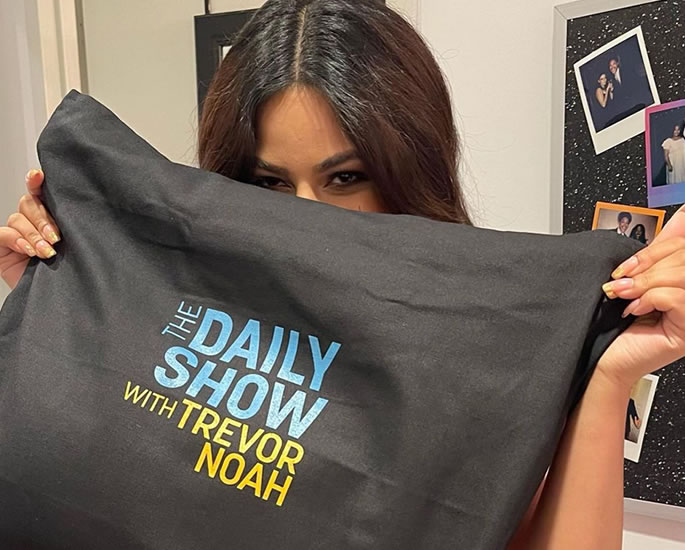 The post featured pictures of Harnaaz backstage, including her with a cushion that read “The Daily Show with Trevor Noah” and her with the host.

Dhiren is a journalism graduate with a passion for gaming, watching films and sports. He also enjoys cooking from time to time. His motto is to “Live life one day at a time.”
Sonam Kapoor & Anand Ahuja welcome a Baby Boy
Are Katrina Kaif & Vicky Kaushal expecting their First Child?