Harjit Bariana, a landlord and takeaway owner has been jailed for exploiting vulnerable unemployed men and enslaving them.

"You exploited their vulnerability by way of addiction"

Harjit Bariana, aged 46, from Blyth in Northumberland, has been jailed for was sentenced to eight and a half years, for enslaving and exploiting vulnerable and unemployed men and forcing them to work for free at his chip shop.

He was also convicted of being involved in the supply of the Valium marketed drug Diazepam at a sentencing hearing at Newcastle Crown Court on Monday, June 18, 2018.

He was jailed for six slavery charges relating to four victims and supplying class C drugs. He was not found guilty of the robbery of one of the men.

The charges related to offences committed during the period between 2014 and 2016.

Bariana exploited the men largely from the North East of England, housing them in a crowded maisonette and where their rent was being paid by housing benefits.

He then demanded extra rent from these vulnerable men knowing they are desperate for accommodation and forced them to work for no wages at his fast-food outlets, Valentino’s takeaway in Sunderland and Antonio’s chip shop in Blyth.

Harjit Bariana abused the men violently, making the alcoholic and drug-addicted tenants work for long hours. He paid them with leftover food, alcohol or a supply of Diazepam and threatened to make the homeless.

“Harjit Bariana targeted desperate and destitute men, providing low-quality housing for them. He received housing benefit for this, but then told the men that they were also expected to work for him to pay entirely fictional debts.

“The men were then forced to work at Bariana’s two restaurants through a combination of threats, beatings and the supply of drugs and alcohol. He would even remove shoes and clothing from the cramped maisonette in which the men were housed, to prevent them leaving their accommodation in the evening.”

The victims were not locked in by Bariana, but constantly in fear of losing the roof over their heads if they did not comply with Bariana’s demands and bullying.

The men were treated as modern-day slaves by the unscrupulous Harjit Bariana, known as ‘Harry’, and made to do demoralising work for him. 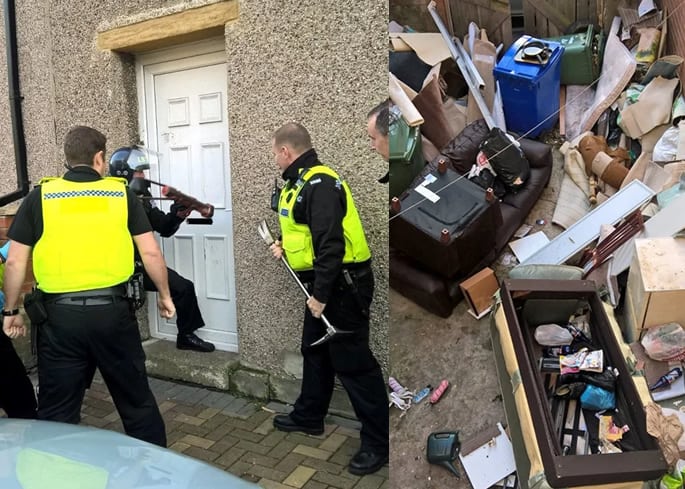 Police revealed some of the horrid experiences of the men exploited by Bariana.

One man was made to clean out a sewage pipe with no gloves. Another man was forced to work barefoot after having his shoes taken away from him by Bariana.

To stop one of the men from avoiding work and going missing, he had his shoes, belt and watch removed.

One of the men who moved into Bariana’s accommodation was a 43-year-old alcoholic who had just been released from prison. He was made to tile a takeaway, which took him all night.

He worked for about five months and paid in alcohol and Diazepam tablets. The man paid Bariana £76 in housing benefit and £20 a week from other benefits in rent.

When Bariana was arrested he denied the charges and said the tenants were lying.

This was not the first conviction for Harjit Bariana. He had previous ones for handling stolen goods, selling counterfeit clothes, making threats and illegal money lending.

After his trial, he was denied bail by Judge Sarah Mallett, who said:

“This was, in my view, commercial exploitation.”

The judge said there was bullying, threats, slaps and violence which included causing one person to fall down the stairs.

“You exploited their vulnerability by way of addiction, you fed and encouraged their addiction to alcohol and, on occasions, drugs.”

Summing up the case, Heather Wilkinson from the CPS said:

“The CPS presented detailed evidence to the court showing the extent of Bariana’s offending. I would like to praise the bravery of the victims and witnesses in this case, whose evidence was key to securing the conviction against Harjit Bariana. I would hope that his sentence today provides a good measure of comfort to those he cruelly exploited for his selfish financial gain.”

Amit enjoys creative challenges and uses writing as a tool for revelation. He has major interest in news, current affairs, trends and cinema. He likes the quote: "Nothing in fine print is ever good news."
Shop Worker chased Thief who was Caught and Jailed
West Midlands Police: The Story of Sue Rai and her Police Career