An Indian woman considered to be of ‘low caste’ has received over £184,000 compensation in a landmark caste discrimination case. Permila Tirkey was reportedly made to work by her employers for only 11 pence an hour.

“I want the public to know what happened to me as it must not happen to anyone else."

In a ground-breaking case, an Indian woman who was considered to be of a ‘low caste’ has been awarded £183,000 in compensation from a wealthy British-Indian family.

Ajay and Pooja Chandhok made Permila Tirkey work 18 hours a day at their home in Milton Keynes. She was only paid 11 pence per hour.

The 39-year-old former employee for the Chandhok’s reportedly worked 7 days a week and was forced to sleep on the floor.

Permila was brought to the UK in 2008, from Bihar, which is considered to be one of the poorest states in India.

Allegedly, Permila was prevented from bringing her Bible with her by the Chandhok’s, and was allowed no contact with her family back home.

The Employment Tribunal Hearing in Cambridge ruled that Permila had been a victim of ‘unlawful harassment’ and ‘indirect religious discrimination’.

They ordered the Chandhok’s to pay the victim £183,773. This was the amount that she was entitled to under the national minimum wage for her years of work.

This truly is a landmark case for caste discrimination. Caste discrimination remains a deadly affair across India and South Asia, where workers and individuals face unequal treatment and marginalisation due to their caste and background.

Sadly, such discrimination has migrated to Britain, where some workers continue to face the same mistreatment that they would back home. 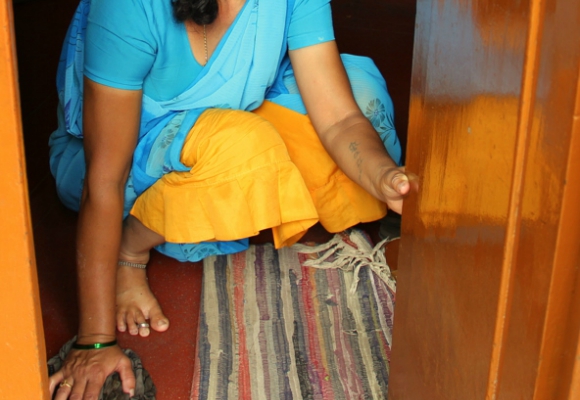 It is hoped that with the successful outcome of this particular case, more can be done for workers in Britain, and that they be protected under race discrimination laws.

Permila’s solicitor, Victoria Marks from the ‘Anti Trafficking and Labour Exploitation Unit’, which also works as a charity, said:

“This is a very useful judgment for victims of modern day slavery. We hope that it will give other victims the courage to come forward and seek redress.”

Speaking after the hearing, Permila said: “I want the public to know what happened to me as it must not happen to anyone else.

“The stress and anxiety that this sort of thing creates for a person can destroy them. I have not been able to smile because my life had been destroyed.

“Now I am able to smile again. Now I am free,” she added.

Clearly much more needs to be done to overturn this backward cultural concept and more support and equality given to individuals who come from marginalised sections of Asian society.

Aisha an English literature graduate, is a keen editorial writer. She adores reading, theatre, and anything arts related. She is a creative soul and is always reinventing herself. Her motto is: “Life is too short, so eat dessert first!”
Why go to a Non-Alcoholic Freshers Event?
Nadiya and Tamal in Great British Bake Off semis