Is He the First Indian Man to have Eyeball Tattoos?

An Indian man has taken his love of body art to the next level – by getting eyeball tattoos! Is 28-year-old Karan the first Indian man to get this inking?

"At the moment, I have uncountable tattoos and 22 piercings on me."

The art of tattoos has grown over recent years, with some feeling experimental in what they would like. But have you ever imagined getting eyeball tattoos?

An Indian man has decided to do just that! 28-year-old Karan, from New Delhi, showcased his new, unusual body art on Instagram, receiving a massive response from fans.

According to Karan, he hails as the first Indian man to have this type of tattoo.

An Australian tattoo artist carried out the procedure on Karan, taking place in New York. He unveiled the body art back in late September 2017.

Describing himself as a ‘tattoographer’, the 28-year-old has a long history with inkings. He got his first tattoo at the age of 13, with it developing into a ‘hobby’ when Karan turned 16. Now he owns various tattoos scattered over his body.

Speaking to NDTV, Karan revealed: “At the moment, I have uncountable tattoos and 22 piercings on me.” However, he has ambitious plans for a future tattoo; one that would cover his whole body! He said:

“Eventually, I will just have one tattoo: head to finger and toe tips.” The 28-year-old is currently working on this inking. Yet six months into the project, he began to toy with the idea of eyeball tattoos, known as Sclera Tattoo. An idea that came to fruition.

But it wasn’t an overnight decision; he first spoke with friends and family on the body art. He adds: “Once they were convinced and knew I was 100% certain… they supported my decision.” 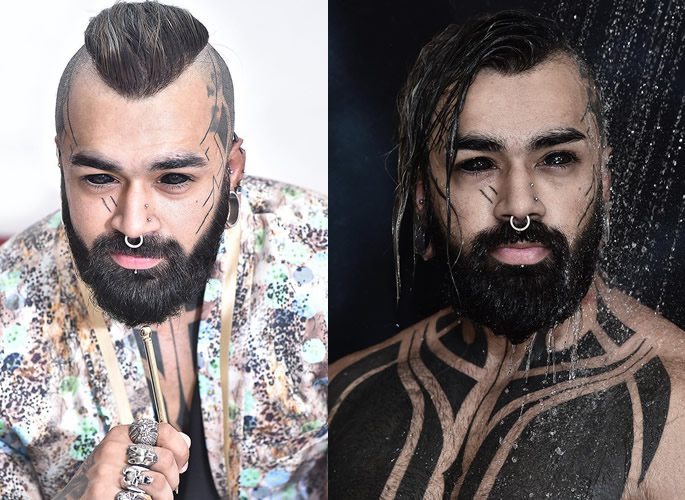 Only a handful of people have this type of tattoo, with Karan claiming:

“Out of the 7.5 billion world population, only a few hundred have it. Out of the 1.3 billion Indian population – I am the first person to have my eyeballs permanently tattooed.”

However, eyeball tattoos hail as a complex procedure. In the past, others have attempted this similar inking, but with disastrous results.

For example, a Canadian model shared her experience on Facebook. Attempting to have her own eyeballs tattooed, the result nearly left her partially blind. She warned others to act cautiously with this procedure.

Karan also shared a video on Instagram, commenting on this. Claiming that the tattoo artist who invented Sclera Tattoo created his own inking, he warned fans to research beforehand.

Attitudes towards tattoos have gradually changed over time. Highlighted through the response to Karan’s body art, many fans have given him positive remarks. Receiving comments of love and praise, the 28-year-old admitted it surprised him.

But one aspect everyone will want to know lies in the pain. Did the procedure hurt the ‘tattoographer’? While he describes pain as just “perspectives”, Karan compared it to a “red-hot needle entering your eyeball.”

Now with the body art completed, we wonder when Karan will achieve his goal of a complete body tattoo?

Warning: You are advised to get proper medical and health advice before proceeding with any kind of procedure.

What is More Important, Good Food or Good Sex?
Tattoographer Karan talks Eyeball Tattoos and his Love of Body Art