Bollywood embarks on making a biopic of Adolf Hitler of his time with Eva Braun, in the Führerbunker. The film will be a first for Indian cinema and aims to show Hitler’s connection with India and the latter stages of his life.

"As a leader, he was successful. Why did he lose as a human being."

Bollywood film director Rakesh Ranjan Kumar has announced his intent to make a movie about Adolf Hitler. This will be the first Bollywood film ever made about the Nazi leader. Titled, Dear Friend Hitler, the biopic aims to capture the last few days of the dictator in his Berlin bunker and Germany after his downfall in 1945.

The title of the film relates to letters written to Hitler by Mahatma Ghandi. Two letters addressing Hitler as ‘Dear Friend’ were written by Gandhi to the dictator pleading with him not to go to war.

The film was to star senior Bollywood actor, Anupam Kher, as Hitler. However, after initially taking the role, he decided he didn’t want to upset his fans or Jewish groups. He told fans on Twitter, “Sometimes human emotions are more important than cinema.I withdrew from Hitler film.” He added, “Thanks for your varied reactions to my opting out of Hitler. After 400 films in 26yrs I have the right to be wrong and still be HAPPY.”

Bollywood actress, Neha Dupia, is to play Hitler’s long term companion and later, short-term wife, Eva Braun, who was 23 years younger than him. The former Miss India and a previous student of history, has started researching Eva Braun’s character.

Rakesh said, “My film aims to recapture the last days of Adolf Hitler.” He added, “It shows Hitler in his underground bunker and portrays his relationship with his close associates. It aims to capture the personality of Adolf Hitler and his insecurities, his charisma and his paranoia during the last few days of his life.” 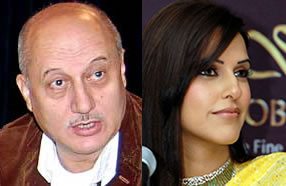 One of the key areas of focus of the story in Rakesh’s film is to do with the relationship between Eva Braun and Hitler. The couple met in Munich around October 1929 but the existence of Braun, who Hitler said reminded him of his mother, was actually kept a secret from the German public until after Word War II.

Traudl Junge, Hitler’s youngest secretary, wrote in her memoirs of Eva and said, “Eva Braun wasn’t tall but she had a very pretty figure and a distinguished appearance. She knew just how to dress in a style that suited her and never looked as if she had overdone it…”

Rakesh says of his portrayal of the relationship in the movie,

“The film will not show the love life of Adolf Hitler. It will show Eva who had been rarely spoken about in the history. Eva had been Hitler’s girlfriend since she was 17 years old.” 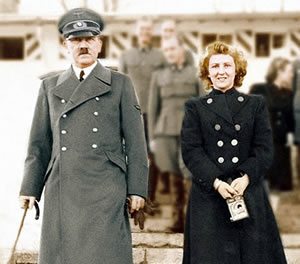 The marriage of Eva to Hitler was very brief despite his relationship with her lasting a very long time. History says, Eva went from Munich to Berlin in early April 1945, to be with Hitler at the Führerbunker, Hitler’s bunker. Hitler and Braun were subsequently married on 29 April 1945 around 00.30hrs during a brief civil ceremony which was witnessed by Joseph Goebbels and Martin Bormann.

After marriage, she changed her name to Eva Hitler. Although bunker personnel were instructed to call her Frau Hitler, her new husband still called his wife Fräulein Braun. Braun and Hitler committed suicide together on 30 April 1945.

The movie will also show a connection with Hitler and India. Rakesh wants to portray how Hitler contributed to India’s independence and what happened to soldiers in Subhas Chandra Bose’s Azad Hind Legion in Germany. The Legion, which fought alongside Axis troops, was a rebellious offshoot of Mahatma Gandhi’s peaceful freedom movement that campaigned to liberate the sub-continent from British rule. 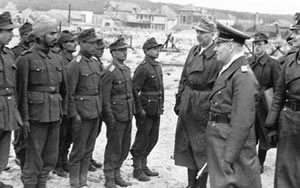 Rakesh said of the depiction, “It shows Hitler’s love for India and how he indirectly contributed to Indian independence. It also depicts the struggle for survival of the lesser known Indian Legion soldiers who were left in Germany by Subhas Bose to fight for India’s independence and Germany’s prestige.”

The inner Hitler is of major interest to the director. “As a leader, he was successful. Why did he lose as a human being, what were the problems, what were the issues, what were his intentions, this is what we want to show,” said Rakesh.

The film will not be laced with song and dance or the melodramatic moods typically seen in Bollywood movies. The aim of the director and producers is to make a globally appealing film with a serious but affectionate tone.

Amit enjoys creative challenges and uses writing as a tool for revelation. He has major interest in news, current affairs, trends and cinema. He likes the quote: "Nothing in fine print is ever good news."
Winners of IIFA 2010 Awards
IIFA 2010 Awards and Cricket videos