Love stories are an essential part of Pakistani folklore. We bring you five of these tales of love and tragedy which have been immortalised to this day.

If there is one consistent subject throughout the folklore of Pakistan, it is love.

It is the most prominent and notable theme around which many of the notable folk tales of Punjab and Sindh revolve.

These love stories follow different pathways, but arrive at one similar ending – the perishing of lovers while fighting for each other.

DESIblitz reveals five of the most legendary folk love stories from Pakistan, some of which also span to India  pre-partition. 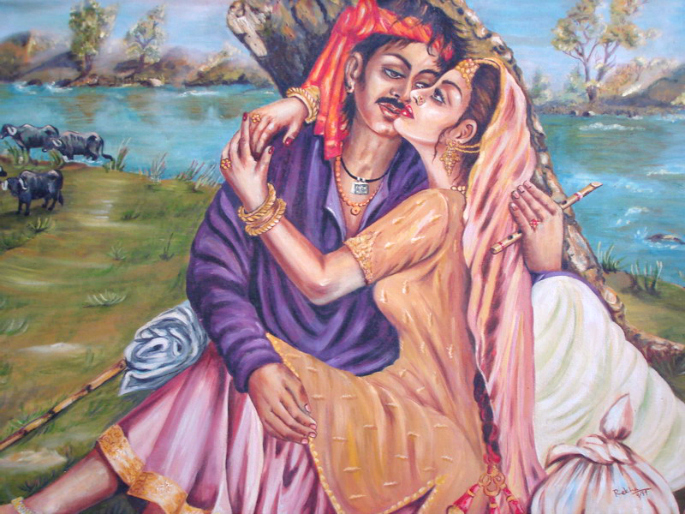 Heer Ranjha is a story of great despair, narrated by Waris Shah. It is a tragic tale of two lovers.

Ranjha, whose real name was Deedo was a fortunate man in some ways, but unfortunate in many others. He was the youngest of four brothers and his father favoured him the most.

When his father passed, his brother’s refused to give him any share in the farm land. He was badly treated by them, forcing him to leave the village. He left for Takht Hazara, hoping to find a better fortune.

In this new village he came across a farm, much like the one he was banished from. This is where he laid his eyes on the most beautiful lady he had ever seen. He instantly fell in love with her and from that moment onwards, it was his sole mission to make her fall in love with him.

It was Heer, and Ranjha got a job of herding her father’s cattle. One thing led to another and Heer also fell hopelessly in love with Ranjha. She was captivated by the beautiful music he played on his flute.

For next few years, their secret affair went on wonderfully, until one day they were caught. Kaido, Heer’s uncle, told on them and Ranjha was exiled from the village.

Lost again, he wandered across Punjab, travelling from city to city till he met a band of Jogis. Ranjha decided to relinquish the material world, dedicate the rest of his life to the Lord.

The new pious Ranjha returned to Takht Hazara, and Heer’s parents agreed for their marriage. The young lovers rejoiced at this revelation, but fate had something else in the store for them.

Kaido, conspired to poison Heer in an attempt to sabotage their marriage. Clueless Heer devoured on the food laced with poison.

When Ranjha found out about this, it was already too late. Struck with grief, he made the decision to end his life. He ate the same food. Their lifeless corpses laid next to each other and the lovers were now united in death.

They were buried in the Heer’s hometown of Takht Hazara near Jhang, Punjab. Their graves are regularly visited by couples.

There are several films made on this love legend, including Heer Ranjha (1992) starring Sridevi as Heer, Anil Kapoor as Ranjha, and Heer Ranjha (2009) starring Neeru Bajwa as Heer, Harbhajan Mann as Ranjha. Other adaptations include the 1970 film starring Raaj Kumar and Priya Rajvansh. 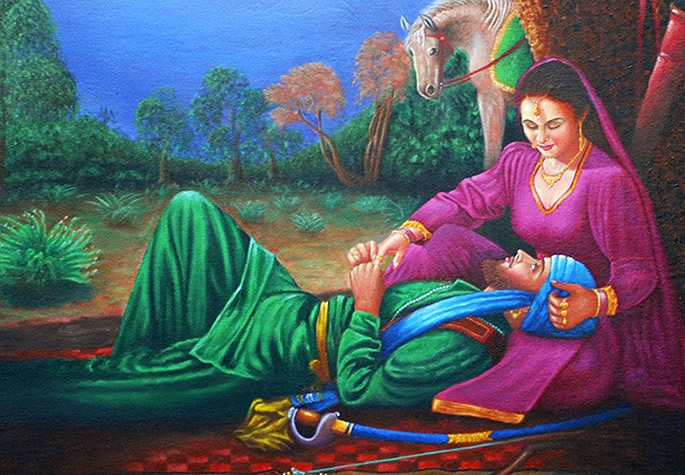 Mahni Khan, the father of Sahiban, was chief of Kheewa, a town in Punjab’s Jhang district.

Mirza’s father was Wanjhal Khan, who was a Chaudhary in the tribe of Kharal Jatts, in the Jaranwala, which is now Faisalabad.

Mirza went to Khivan in order to study. He fell in love with Sahiban soon after he saw her for the very first time.

Sahiban’s marriage was arranged soon after they became lovers, and she sent a message to Mirza. Mirza, who was attending the marriage ceremony of his sister, immediately left for Sahiban’s village.

Mirza took Sahiban away from her marriage ceremony on his mare. They hid in the forest, where they were caught by her brothers. Mirza was an expert archer, but he was unable to defend himself.

Sahiban broke all of his arrows, hoping to avoid any bloodshed. Mirza put up a fight but didn’t last long, and was killed by her brothers. Sahiban ended her life right there with Mirza’s sword.

This love story is a now part of the Punjabi culture. There are numerous folk songs by singers like Harbhajan Mann, Kuldeep Manak, Gurmeet Bawa, and many others. 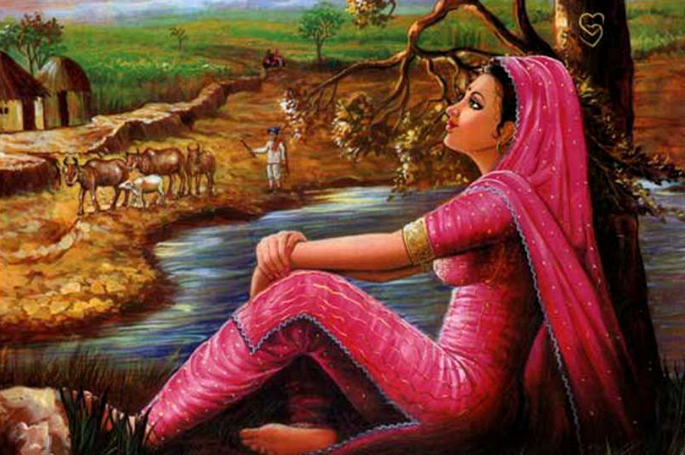 Sassi’s father was King of Bhamboor, but upon her birth, an astrologer predicted that Sassi was cursed and would bring shame to the prestige of this royal family.

The Queen ordered her to be put in a box and thrown in the Indus River. A washer man found her, and decided to raise her as his own.

Punnu Khan was the son of King Mir Hoth Khan. He belonged to the Makran area of Baluchistan.

Sassi’s beauty became a fairy tale as she grew up. Stories of her divine beauty spread across the region, and this inspired Punnu to meet her. When he reached the house of the washer-man and laid his eyes on the beautiful Sassi, he immediately fell in love with her.

Punnu asked the washer-man for Sassi’s hand in marriage, who initially refused but agreed if only Punnu passes trial as a washer-man. He failed miserably but still managed to convince the washer-man.

When this news travelled to the family of Punnu, they instantly opposed this arrangement because this was an unacceptable match for them. His brothers deviously attended the marriage ceremony but intoxicated him and took him back to Makran.

Sassi lost her mind when she was met with this news. She ran barefoot through the desert towards the hometown of Punnu. Her feet blistered, her dry lips parched from constantly crying the name of her lover.

She met a shepherd whom she asked for help, but instead he tried to violate her. She barely managed to escape.

The legend has it that when she couldn’t take any more, she prayed and the mountains split and buried her alive. When Punnu woke up, he was devastated too.

He ran towards the village of Sassi, when he reached that mountain he met the shepherd who told him what happened to Sassi. In a fit of grief, he lamented and the earth swallowed him too.

Their legendary graves still exist in that valley. Shah Abdul Latif Bhittai narrated this historic tale in his poetry, which tells the story of eternal love and union with Divine. 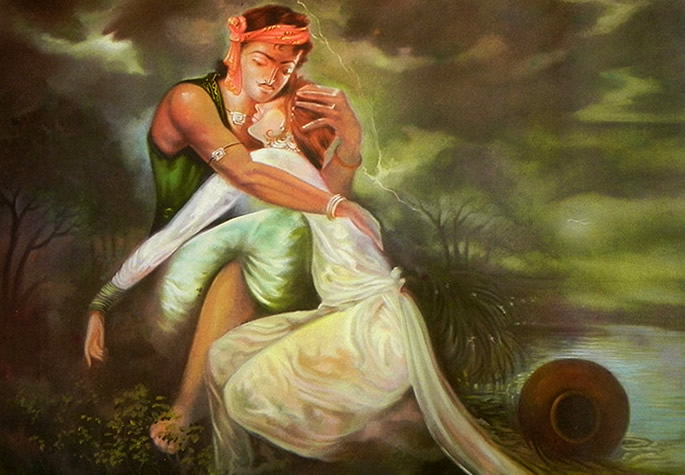 Sohni was born in the home of a potter, in a village at the bank of Indus River. She grew up learning how to draw floral designs on the items of pottery her father made.

Izzat Baig was an Uzbek trader from Bukara, whose business trip became a permanent stay once he laid his eyes on Sohni. He would visit the potter’s shop every day just so that he could get a glimpse of Sohni.

Sohni fell in love with him too. Now her art turned from flowers to shades of her love and dreams. Izzat Baig decided to stay and took a job at the home of Sohni. He would take the buffaloes to grazing, which earned him the name of ‘Mahiwal’.

When rumours of their love started to spread, her parents arranged her marriage with another potter. ‘Barat’ suddenly showed up one day and Sohni was married before she could do anything.

This completely turned the life of Mahiwal upside down. He renounced the material world and became a Jogi. The land of Sohni was a shrine for him. The lovers would meet secretly at night.

Sohni came to the riverside and Mahiwal swam across the river to see each other. Mahiwal brought a roasted fish everyday for Sohni.

Legend has it that one day he couldn’t find any fish so he took a slice of meat from his leg and roasted it instead.

Mahiwal was unable to swim so Sohni started coming towards his side using a ‘Matti Ka Ghara’ (earthen pitcher). One day, it was replaced by an unbaked one by her sister-in-law, who was spying on her.

The pitcher dissolved in the river water and Sohni drowned. In his attempts to save her, Mahiwal lost his life too. Their bodies were said to be recovered and their tomb is in the city of Shahdapur, Sindh.

A Bollywood film, Sohni-Mahiwal (1984) was also made starring Sunny Deol and Poonam Dhillon. 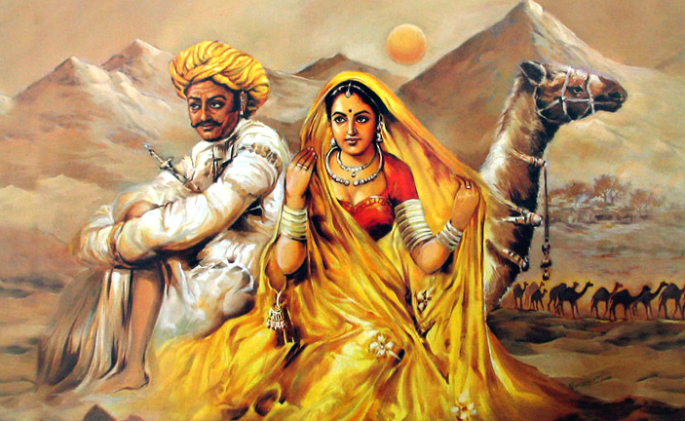 Momal Rano (or Mumal Rano) is one of the seven popular tragic romance stories from Sindh, and appears in Shah Jo Risalo by Shah Abdul Latif Bhittai.

Mumal Rathore was a princess from Jaisalmer, India. She lived in a palace with her sisters. The Kak Palace held magical powers and attracted rich suitors for the sisters. The tales about the palace and Mumal’s ravishing beauty became a legend.

Rana Mahendra Sodha was the ruler of Amar Kot, Sindh. He was attracted to the magical Kak and decided to pay it a visit.

Rana was a courageous man and he reached the palace without any harm. This impressed Mumal so much that she accepted him as her consort. He would spend nights at the palace and then return to Umer Kot at dawn. Rana covered long distances from AmarKot to Kak to be with Mumal.

One day, Rano got late for some reason. Mumal became frustrated becaue of this delay. She decided to prank him by a silly trick. She asked her sister to dress like a man and sleep in the bed with her. Rano was enraged by the sight.

Out of anger and disgust, Rano left his cane besides Mumal’s bed and departed for Umer Kot. Rano ignored all pleading from Mumal.

Desperate, Mumal set herself on fire. When Rano heard about it, it was too late and Mumal was engulfed in flames. Rano jumped into the fire and was burned along with Mumal.

These tales have rich characters that reflect the time and society they lived in.

The stories are not just meant for the young and those in love, but for anyone with a sense of deep emotion. They are narrated for their message of tradition and love.

Haseeb is an English Major, an avid NBA fan and a hip hop connoisseur. As a zesty writer he enjoys writing poetry and lives his days by the motto "Thou shall not judge."
This Summer and That Summer by Sanjeev Sethi
Indian female artist brings Desi twist to Pinup Models