Desi Remedies to help with Headaches and Migraines

A headache can be painful and the easiest cure is to take a painkiller. However, there are several Desi remedies which can help with headaches.

It helps reduce the symptoms of nausea which come with migraines.

Headaches are a common condition that many Desi people suffer from on a daily basis.

The lifestyle of Desi people, especially the stress and worry related to family, relationships and finances can all lead to the cause headaches.

The tension headache affects Desi people most commonly, causing pain in the head, neck and behind the eyes.

A headache can occur due to tiredness, hunger, low blood sugar or some other medical condition.

Although the most common way to treat a headache is to have medication, there are Desi remedies which can help with the pain.

These Desi remedies are an excellent drug-free way to manage the pain using completely natural ingredients. 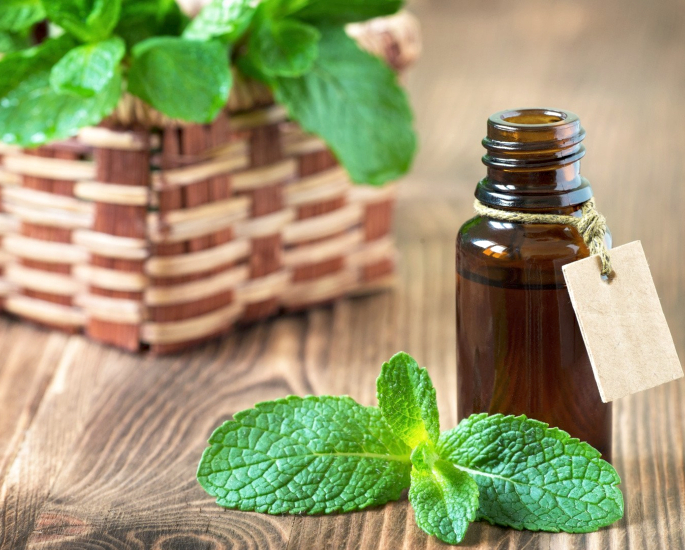 Peppermint oil is one of the most commonly used Desi remedies to combat headaches as it been part of Ayurvedic treatment for centuries.

Clogged blood vessels can cause a headache. The refreshing scent of peppermint oil helps open up these blood vessels, helping to regulate blood flow.

They also open up the sinuses for better oxygen flow, hence reducing the pain. The active ingredient menthol also lessens the intensity of acute migraines.

It is an ingredient which comes in a number of forms to suit your preference. Peppermint oil commonly comes as a liquid oil, in tea, as gel capsules or as sweets.

Peppermint oil can be used in a number of ways to reduce headache symptoms.

The fragrance can be breathed in, either on its own or a few drops can be added to your hot bath.

Alternatively, mix three drops with one tablespoon of almond oil or water and massage the temples or the back of your neck with it.

Dried peppermint makes for a helpful herbal tea by adding one teaspoon to a cup of boiling water. Brew for 10 minutes and strain, add honey for sweetness and drink.

It is one of the best Desi headache remedies because it can be used in so many ways. For those suffering from tension headaches, it is best to use peppermint oil. 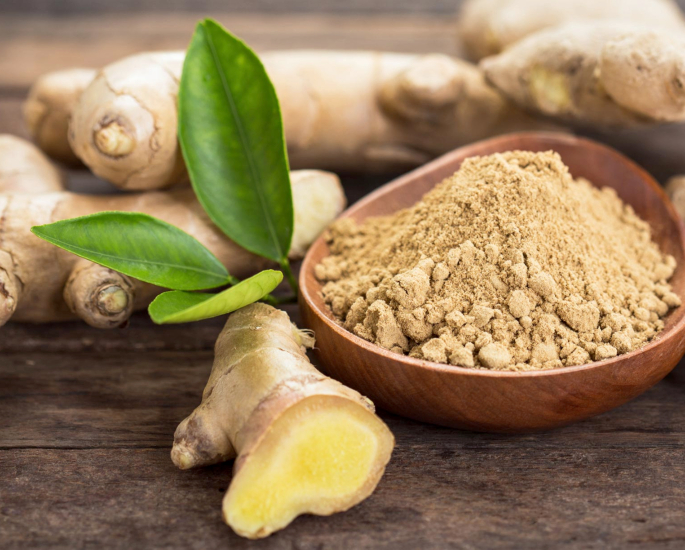 Ginger is an ancient remedy, commonly used in South Asian countries and has a number of health benefits, such as helping with an upset stomach.

It is also widely touted as an elixir for headaches as it provides instant relief when consumed.

It was first found to be an effective remedy in 2014 when the Journal of Phytotherapy Research found ginger to be as effective as sumatriptan, a commonly prescribed medicine.

The root has strong anti-inflammatory properties. As a result, it reduces inflammation of the blood vessels in the head, hence easing the pain.

Because ginger stimulates digestion, it helps reduce the symptoms of nausea which come with migraines.

The most effective way to use ginger as a remedy is to add fresh ginger to a pot of boiling water and leave it for 10 minutes.

Strain and drink up to twice a day for maximum effect. Over the course of the day, this ginger tea will reduce the pain of your splitting headache.

For quicker relief, make a ginger paste by mixing ginger powder with a little water and applying to your forehead.

It is an inexpensive item which guarantees to reduce pain as well as a number of other problems you may have. 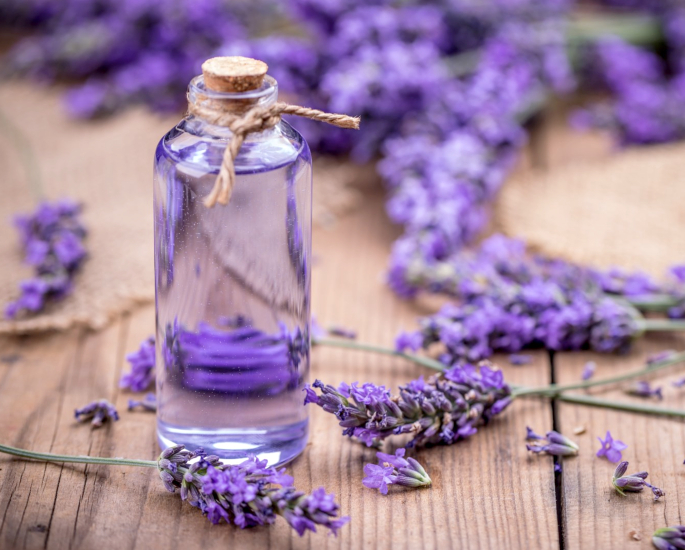 Lavender oil is famous for its relaxation benefits and beautiful fragrance but it is also a great remedy for alleviating headaches.

Even the smell of the soothing scent helps as it regulates blood flow and opens up the sinuses like peppermint oil.

A study involving 129 migraine sufferers who had to inhale lavender oil to see if there were any benefits.

It was found that the lavender oil had a positive effect on 92 people, reducing the severity of their migraines.

Lavender oil is a versatile remedy as it can be used in a number of ways depending on your preference.

He says: “You can draw a foot bath of lavender oil and peppermint since the hot water draws blood to your feet and the aroma relaxes you.”

The most basic way is to put a few drops on a tissue and inhaling it. Aromatherapy in Ayurveda is a powerful healing force and lavender oil is one of the most helpful.

Another effective option is to mix three drops in one tablespoon of almond oil and massage it into your forehead.

The simplicity of using lavender oil make it one of the best Desi remedies to combat a headache. 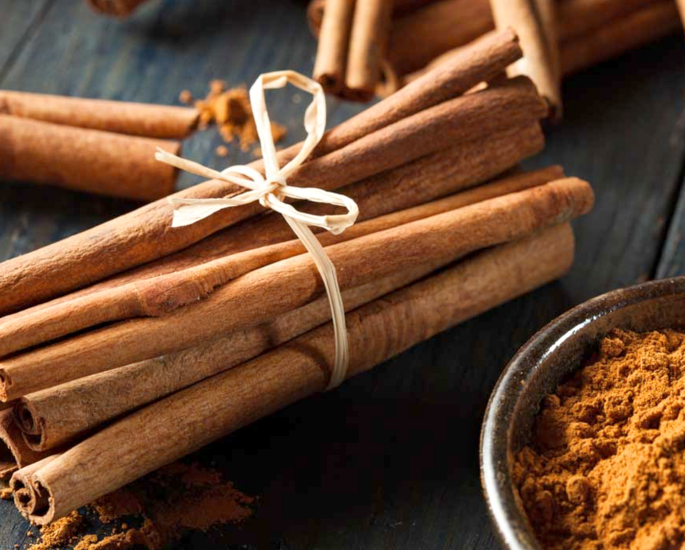 Cinnamon is probably best known as an essential spice for Indian cuisine but it is also a centuries-old natural remedy.

It has been used in Ayurvedic medicine to treat a number of problems such as respiratory and digestive issues.

Cinnamon is also an effective cure for a headache when applied.

One of the symptoms for a headache is muscle tension. Cinnamon helps to ease it and gives an almost instant relief.

To make it into a home remedy, ground some cinnamon sticks into a thick paste by mixing with a splash of water. Apply it to the temples and forehead and leave for 30 minutes.

The cinnamon works quickly to soothe the pain. After half an hour, wash it off with warm water.

Using cinnamon as a remedy for headaches and migraines is one of the best ones as it starts working almost immediately. 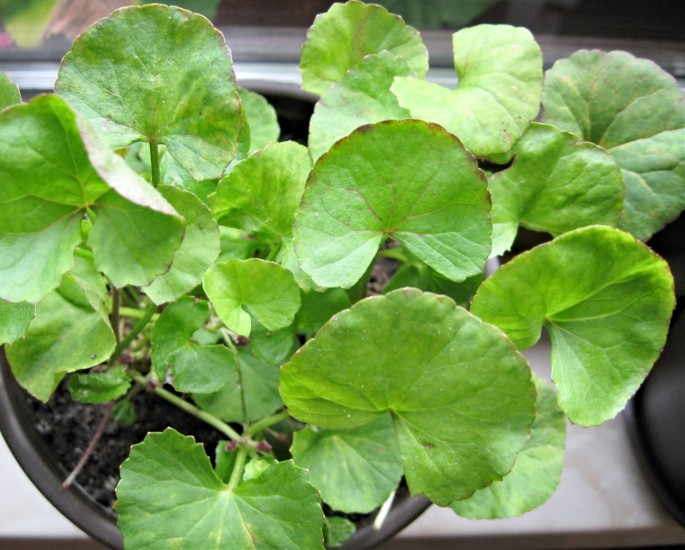 The herb has had a very long history in Ayurvedic medicine where it has been used to improve brain function and helping to relieve anxiety in South Asian countries.

It has been reported that it has been used for medicinal purposes since the sixth Century.

Brahmi is also known to reduce the pain of headaches, specifically Vata headaches, which can be caused by stress and anxiety. This leads to a throbbing pain in the back of the head.

Using Brahmi in oil form is the most effective method if you want to reduce the severity of a headache.

Rub a few drops of the oil into the temples or back of the head for temporary relief. You can also mix a couple of drops with a little ghee and put it into your nostrils for a soothing effect.

It is advised to only use a few drops of Brahmi oil, otherwise, it will not be effective and may even increase headache pain. 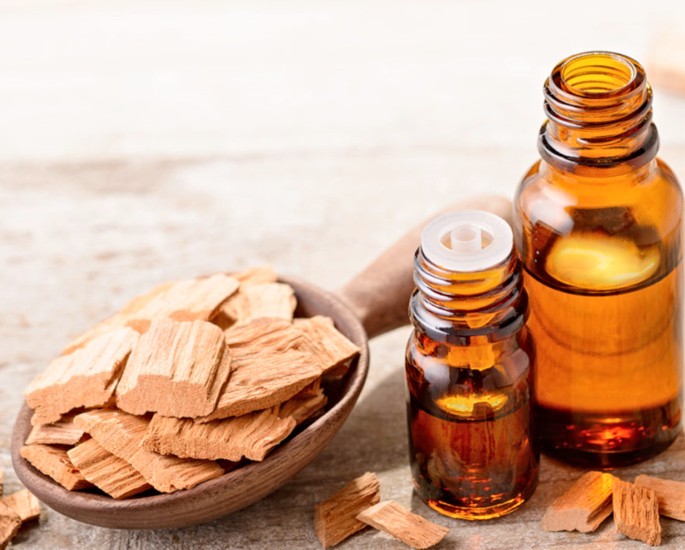 Chandan or sandalwood is commonly found in India and is claimed to have medicinal properties by calming the mind.

This old Desi remedy is also helpful in soothing a headache when made into a paste applied.

When headaches occur due to excessive sun exposure, sandalwood is very effective as it helps cool the nerves within the head.

The nerves in the head become inflamed, causing a headache. But using sandalwood will nullify it.

To create this Ayurvedic remedy, mix half a teaspoon of sandalwood powder with water until it becomes a paste.

Apply the paste onto your forehead and leave it for 20 minutes.

This is a remedy to try during sunny weather as well as taking other measures to prevent a headache when exposed to the sun. 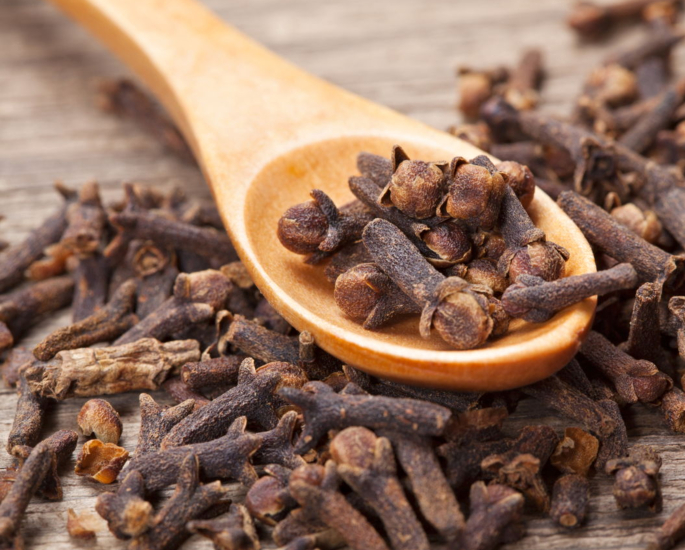 Cloves are perhaps best known for adding flavour to many Desi dishes and possessing a number of health benefits.

Desi people commonly put a clove in their mouth to improve digestion and help with their oral health.

But it is also a massive help in easing a throbbing headache. This is down to its cooling and pain-relieving properties.

Cloves possess a compound called eugenol which has an anti-inflammatory effect, making it an excellent alternative to painkillers.

Studies show that eugenol is correlated with the reduction of inflammation. Results have highlighted that eugenol reduces pain by stimulating receptors.

The best way is to make a clove-infused tea as it is effective and does not result in the harmful side-effects that some medications have.

You can also crush a few cloves and put them in a sachet to inhale until the pain reduces.

Alternatively, mix two drops of clove oil with a tablespoon of coconut oil and gently massage into your forehead and temples.

It is one of the most effective Desi remedies as it helps with a lot of problems as well as a headache.

These remedies are easy to get a hold of and provide a number of other health benefits apart as well as helping with headaches and migraines.

This makes them helpful for people with different problems.

Some need regular use for there to be results but many of them take a matter of hours before they start working.

Results also depend on your own health and how you react to each remedy. It is best to give a few of them a try to see which one works best for you.