The trailer for Deepika Padukone’s upcoming film ‘Gehraiyaan’ provides an insight into a forbidden romance in the 21st century.

"Shakun is truly a master"

The trailer for Shakun Batra’s upcoming film Gehraiyaan was released on January 20, 2022.

Gehraiyaan, which stars Deepika Padukone, Siddhant Chaturvedi, Ananya Panday and Dhairya Karwa, has been described as a “mirror into modern adult relationships”.

The trailer opens with a glimpse of Alisha, played by Deepika, and Karan’s tumultuous married life.

In the trailer, Alisha and Zain can be seen growing closer to one another.

Their secret relationship quickly leads to friction in their lives.

As soon as the trailer was released, fans left high praise for Deepika and Siddhant’s chemistry.

Gehraiyaan will release on Amazon Prime Video on February 11, 2022.

The romance drama was earlier slated to release on the OTT platform on January 25, 2022, but it was recently postponed.

Producer Karan Johar had announced the news on social media.

He wrote: “We can see the shore, till then we’ll dive into your love!

“Alisha, my character in Gehraiyaan is extremely close to my heart and certainly one of the most challenging characters I have portrayed on screen.

“I am grateful to have had the opportunity to play a role that was fun and challenging at the same time.

“Each of the characters’ struggles and arcs is real, raw and relatable.

“Our endeavour is to take viewers on a journey they will relate to.”

Deepika said: “When it comes to dealing with relationships and human emotion, Shakun is truly a master of his craft.

“With Gehraiyaan, again, he has woven a story that will appeal to all and I am thrilled that along with Amazon Prime Video we are able to take this story to audiences worldwide.”

Siddhant Chaturvedi described the film’s release on Amazon as a homecoming, given that he started his acting journey with the Amazon web series The Inside Edge.

The actor said: “In a manner, this seems like coming back home to me.

Gehraiyaan will have its world premiere on Amazon Prime Video across more than 240 countries and territories on February 11, 2022. 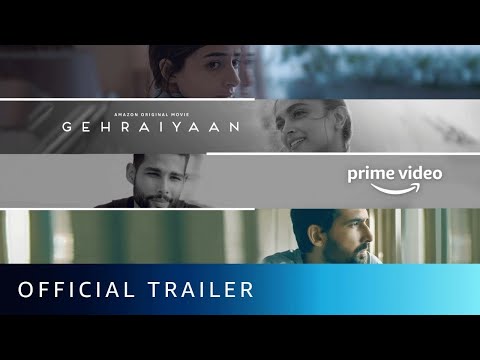 Ravinder is a Journalism BA graduate. She has a strong passion for all things fashion, beauty, and lifestyle. She also likes to watch films, read books and travel.
Rashami Desai Tries to Hit Devoleena in Bigg Boss 15
Did Marriage & Motherhood affect Malaika Arora’s Career?