A couple from the West Midlands have revealed that they launched an Indian takeaway business in their back garden.

A couple have launched an Indian takeaway business in a unique location, their back garden.

Chef Pale Singh and his partner Kelly Pooler transformed an outhouse into a fully-equipped professional kitchen. It means that work is only a few steps from their home in Pensnett, Dudley.

The couple have been together for nine years and launched ‘Taste from India’ using family recipes.

Reportedly, some recipes are so secret that not even Kelly is allowed to know what’s in them.

Former carer and mother-of-three Kelly bought her home in June 2020 after living there for 11 years and launched the business in August.

She explained that her neighbours are fully supportive of the Indian takeaway.

Kelly told Birmingham Mail: “In the first lockdown I was a carer and I was working all the hours God sends.

“Pale’s work had shut down, but he was still working in the shop but we decided to take a big risk and set up the takeaway in the garden.

“His friends helped him to build the kitchen.

“I was nervous about going into business with my partner. They say you shouldn’t mix business with pleasure but it’s the best thing we have ever done.

“Six weeks ago I left my job. I used to have to get up at 6 am and sometimes I wouldn’t be back until 10 pm. I like the fact I’m here.

“I don’t go in the kitchen, but I deal with all the admin and taking the orders. We are really busy at weekends but it’s quieter during the week.” 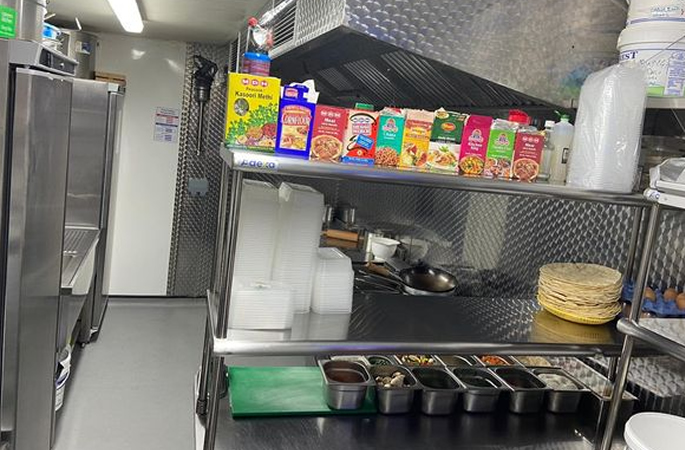 Kelly generated customers by promoting the takeaway on social media. The couple has even hosted live videos of Pale cooking in the kitchen.

She continued: “I just started to promote the business on Facebook. I set up a page and now it has more than 1,200 likes and we have 500 customers on the system.

“Last week we did a Facebook live where Pale made a chicken balti. After that, we had a load of new customers.

“Pale has been a chef for 17 years and it’s his passion. When he’s not working he is cooking for us.”

“I was really nervous when we received the first order but Pale gets excited every time we get an order.

“Everything is made from scratch. Pale uses his mother’s recipes and none of our curries contains gee butter, so you don’t get that greasy layer over the top.

“But the secret is in his curry bases and even I don’t know the ingredients to that.”

Kelly revealed that if the Indian takeaway continues to generate good business, she and Pale hope to open their own restaurant.

Dhiren is a journalism graduate with a passion for gaming, watching films and sports. He also enjoys cooking from time to time. His motto is to “Live life one day at a time.”
10 Healthy Indian Snacks You Must Try
Vegan Alternatives to Popular Indian Dishes