Prime Minister Boris Johnson has announced that those who racially abuse footballers online will be banned from attending football matches.

“You will not be going to the match"

Boris Johnson has announced that racist abuse of footballers online will trigger a ban on attending football matches.

This came after England‘s Bukayo Saka, Jadon Sancho and Marcus Rashford received vile racist abuse after their penalty misses in the loss against Italy.

The Prime Minister has now said that the government is toughening up the football banning order regime.

However, the move came after pressure from Labour to take action.

In the House of Commons, Mr Johnson defended Home Secretary Priti Patel for defending fans’ right to boo England players taking the knee at the start of matches.

But Sir Keir Starmer told him:

“She’s got this wrong, the whole country knows that, his own MPs know it.”

After being accused of “stoking racism”, Mr Johnson stated:

“I don’t want to engage in a political culture war of any kind.”

Currently, football banning orders do not cover online offences. It only covers racism shouted from the terraces.

This has led to pressure to strengthen the Online Safety Bill.

Mr Johnson also said that the Bill would hit tech companies failing to remove illegal and harmful content from their platforms quickly with fines worth up to 10% of their annual global turnover.

However, the legislation has been delayed for a long time and it is unclear when it will finally come into force.

On July 14, 2021, it was revealed that the Football Association (FA) will ask Saka, Rashford and Sancho if they want to see any of the individuals who posted racist content prosecuted. 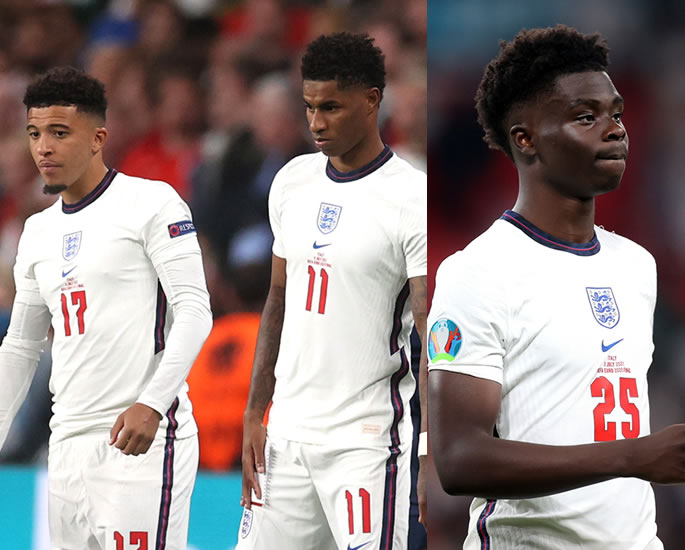 Their views will then be passed onto investigating officers.

Even if the trio does not want criminal cases to go ahead, police and the CPS may still charge the suspects.

It came after it was found Instagram failed to take down more than 94% of accounts reported for sending racist abuse.

The i reported that it also allowed 42 comments likening the three players to monkeys, 17 posts containing the ‘N-word’ and 15 comments telling them to return to other countries.

Mr Johnson’s announcement comes after his party’s stance on racism came under fire from both England players and within the Conservative Party.

Previously, she did not support the players taking the knee, calling it “gesture politics”.

One former Tory minister sided with Mings, saying he is “completely right”.

“There’s no point pretending that these things weren’t said.

“The England footballer Tyrone Mings, he said this labelling anti-racism messages as gesture politics served to stoke the fire of racism and hatred.

“Prime minister, they’re powerful words from someone who has himself been subjected to racist abuse. He’s right, isn’t he?”

But Mr Johnson replied, of the England team: “I support them in the way that they show solidarity with their friends who face racism.

“The home secretary has faced racism and prejudice all her career of a kind that he can never imagine, and she has taken practical steps to get black and minority officers into the police in record numbers.”

Dhiren is a journalism graduate with a passion for gaming, watching films and sports. He also enjoys cooking from time to time. His motto is to “Live life one day at a time.”
Woman had Miscarriage after Hotel Staff refused Hospital Trip
Scottish MP reveals Racist Abuse since getting into Politics