The IPL 8 Opening Ceremony saw a host of Bollywood stars perform to a packed out crowd. But a series of blunders from Shahid, Saif, and Farhan made the mini-concert memorable for all the wrong reasons!

"Banged the bike broke the stage. Felt the love. Amaze."

Kolkata’s Salt Lake Stadium was lit up on April 7, 2015 with a mouth-watering Bollywood line up set to kick off IPL 8 with a bang.

But what should have been a sizzling global opportunity for Bollywood’s finest to showcase their talent, performances were described as a ‘plethora of blunders’.

#IPLOpeningCeremony was the top trending Twitter hashtag in India, but sadly it was for all the wrong reasons.

Fans vented their disappointment over the ‘mismanagement’ of the event, the four headline acts, as well host Saif Ali Khan. 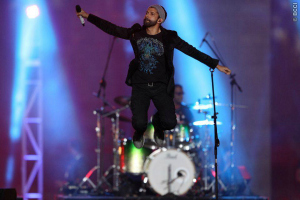 The show was delayed by 90 minutes due to heavy rainfall which dampened the mood from the off. But Farhan was keen to keep fans in high spirits as he said:

“We are all as anxious to get this event started. One can’t do anything against nature but our fingers are crossed.”

Host Saif Ali Khan was branded a ‘nightmare’ by fans. Apart from fumbling and forgetting his lines, the highlight of his bloopers was to call up Shikhar Dhawan onto the stage only to see Rohit Sharma walk on.

If Kareena Kapoor’s husband didn’t dazzle then her ex-boyfriend Shahid only added to the list of gaffes. It was rumoured the pair were trying to avoid each other but were later seen chatting amicably.

Entering on a motorbike, the Haider superstar rode straight into a part of the stage and broke it. He went on to fumble his dance moves and vocals to the Bappi Lahiri classic, ‘I am a disco dancer’. Despite this, he managed to gain the respect of many fans by recovering and carry on to ‘Saree Ka Fall’.

Shahid saw the funny side of his performance and later tweeted:

He also tweeted: “Had a blast at the ipl opening ceremony . Kolkata thank you for the overwhelming love.”

Anushka Sharma who is enjoying the success of NH10, danced to some of her big upbeat numbers from PK and Jab Tak Hai Jaan.

However, she failed to live up to expectations and much of her performance was accompanied by crowds chanting ‘Kohli Kohli’.

Nobody, however, was more proud of the Jab Tak Hai Jaan star than boyfriend and Royal Challengers Bangalore captain, Virat Kohli.

The cameras continuously panned to a beaming Kohli throughout Sharma’s performance catching a rare glimpse of his fond emotions towards his superstar sweetheart. The pair who are reportedly getting married later this year are one of Bollywood-meet-cricket’s hottest couples. 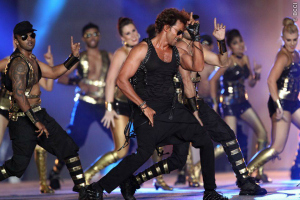 Actor-director Farhan Akhtar’s vocals received mixed reviews on social media as he played with his live band. Ex-cricketer Navjot Singh Sidhu may not have helped matters by comparing to him to such greats as Mohammed Rafi and Kishore Kumar.

@soniakundrsingh tweeted: ‘#fahranakhtar that was harsh for even my ears.’

In contrast, the night’s only saving grace seemed to be showstopper Hrithik Roshan’s ‘electric’ performance which lived up to expectations receiving rave reviews all round for his dance routines.

The Bang Bang star’s heroics didn’t however seem to be enough to save the night. The final verdict of the fans? It was the ‘most boring show’ ever.

It’s astonishing to see how such a star studded line up could provoke such bitterness from millions of viewers. Was the weather to blame, the organisers or the stars themselves? Now that’s just not cricket!

See all the images from the IPL 8 Opening Ceremony below: