The 2014 British Awards has shown considerable promise for Asian artists in mainstream music. From the likes of Rudimental, One Direction and Naughty Boy all nominated for awards, the Asian quota is on the rise.

"All four of us came together with 'Waiting All Night' and it got us where we are now."

The Brit Awards 2014 saw mainstream artists and media come out in full force to celebrate the talents of British musicians and their insurmountable success across the world.

Held at the O2 in London, the Brits saw some incredible live performances from the likes of Beyoncé, Katy Perry, Pharrell Williams and Bruno Mars.

These American acts flew in from the States to join British artists Ellie Goulding, Artic Monkeys and Rudimental on stage.

Without a doubt, the 2014 awards have finally shown the true multicultural diversity of British music; with the Asian presence in the nominees list encouraging. 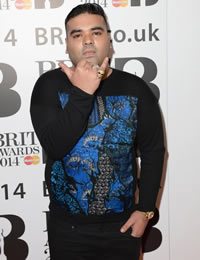 Perhaps the most visible Asian faces in British music today are music producer Naughty Boy, and singer Zayn Malik from the crowd-pleasing pop band, One Direction. The two acts were up for numerous awards, including Best British Single which is judged purely on sales worldwide.

Naughty Boy (featuring Sam Smith) was nominated for his smash hit, ‘La La La’ which dominated the airwaves for the whole summer of 2013. The track became the fifth biggest selling song of 2013 and shifted 145,000 copies in its first week.

One Direction were also nominated for their charity cover of Teenage Kicks’ ‘One Way or Another’, selling 113,000 copies in its first week.

Beating the competition and taking the prize for the highest selling single of 2013 however, was in fact Rudimental, a band that sees another Asian presence in the form of producer, Amir Amor (real name Amir Izadkhah).

The band which has seen a surge in popularity over the last few years won Best British Single for ‘Waiting All Night’ featuring Ella Eyre. Amir later tweeted his appreciation to his followers: “Best single… Thank you!! @BRITAwards @ThisIsElla.”

Following the win, DJ Locksmith said: “I’ll tell you something that’s really special about ‘Waiting All Night’ is that everyone was against us putting it out there. All four of us came together and put our careers on the line with ‘Waiting All Night’ and it got us where we are now.” 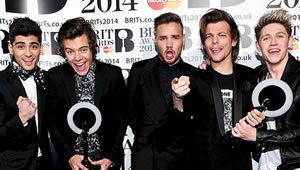 One Direction, despite losing out to the British Single award, still fared well, taking away Best Video and the Global Success award, with total global sales of 11.5 million. The boy band have also been named ‘Global Recording Artists of 2013’ by the recording and trade organisation, IFPI.

All three of their albums have debuted at Number 1 in the US charts – the first British group to do so. It is clear that their unprecedented success has indirectly been a huge boost for Asians living in Britain – who are now more visible to international audiences.

But despite music in the UK being at all-time high, diversity in the multi-ethnic nation is still questionable. Even with the increase of brown faces in some popular bands, Asians remain largely under-represented in the music industry.

Acts like Jay Sean and MIA have found bigger audiences abroad as opposed to the UK. Burban, or British Asian Urban music has been making a headway among the Asian music scene, but even they face stiff competition from international Indian and South Asian artists, and they have yet to break completely into mainstream music. Can this all be down to a lack of talent? 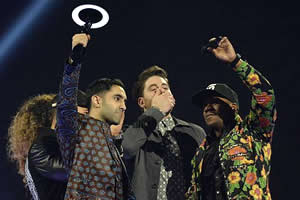 Even the representation of Asians at major events including the Brit Awards is extremely low, with no Asian celebrities even presenting awards.

It is clear that much more needs to be done to allow Asians to make their mark on mainstream music. Either through more opportunities or a better appreciation of their unique sound.

As Amir from Rudimental explains, many artists are forced to be produced or manufactured in a certain way or adhere to a certain style. For Asian artists then, keeping up your Desi roots can be somewhat difficult, as is clear with the likes of Zayn Malik:

“It’s very important now that we’re in the session with [the vocalists] and do the co-write. If we’re there with them, we can almost mould it into our sound. When an artist or band gets signed, the first thing they’re matched to is songwriters but for us it’s important to keep it in house. We don’t want to lose what we are,” Amir says.

For any new artist therefore, becoming a national or even international success is a daunting task, and it seems that mainstream music needs to open its doors to allow more creative talent through. Just take a look at the winners of the Brit Awards 2014:

British Album Of The Year
AM by Arctic Monkeys

While there is some promise for ethnic artists, there is still a long way to go with British Asian acts attempting to break through the mainstream mould rather than solely catering to a niche community audience.

The British identity already invites multicultural diversity, and it is only right that this should be reflected in all creative outlets at a national and international level.

Aisha an English literature graduate, is a keen editorial writer. She adores reading, theatre, and anything arts related. She is a creative soul and is always reinventing herself. Her motto is: “Life is too short, so eat dessert first!”
Imperial College London presents East Meets West
Popular Bollywood Songs copied from the West