"I’ve always been passionate about spreading music and promulgating film to wider audiences."

With increasing South Indian and Sri Lankan communities on British shores, the BBC Asian Network has recognised the demand for a show dedicated to this demographic.

Describing herself as hard-working, passionate and musical, in an exclusive Gupshup with DESIblitz, Ashanti tells us why she began the radio show and what it means to South Indian listeners.

What is your favourite part about being on the radio?

“I’ve always been passionate about spreading music and promulgating film to wider audiences, which is what made me jump from a successful corporate career, into media.

Why concentrate on South Indian and Sri Lankan audiences? 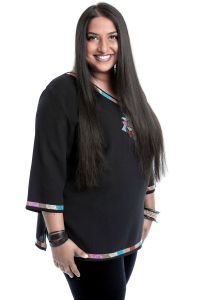 “There was a gap in the market that I strived to bridge from 2003 till now, as the Indian subcontinent is huge, in terms of creative output. This segment of the society in the diaspora was untapped.

“Mark Strippel, the head of the BBC Asian Network was very savvy to this, as he had heard my DesiHits.com ‘South Side Show’ for 63 episodes, featuring the likes of A R Rahman, Aishwarya Rai Bachchan and many more South Indians.

“The diaspora of South Indians and Sri Lankans are full of well educated and cultured audiences the world over, as a show like this, reaches out to them.”

How important is it for younger generations of British Asians to hold onto their culture and heritage?

“As someone who was born in Sri Lanka, grew up in Denmark, West Africa and moved to the UK at the age of 12, I have found that my culture has given me a sense of belonging and most of my friends would agree.

“We found commonality in our similarities and a bond in our rich heritage, while also embracing the culture of the lands we live in. Having this dual connection to our roots, is a boon.”

Was it a deliberate decision to have your show in English rather than a specific South Indian language?

“Indeed it was. The languages of the South and it’s diaspora, are Tamil, Telugu, Kannada, Malayalam, Tulu, Sinhalese and Konkani, plus regional dialects.

“The common language to British Asians and those of the diaspora, is English. Our main target audience, as BBC Asian Network, is to communicate with all generations, so the show has a mix of all these.”

“We also include Tamil language vox pops and interviews, from time to time, as there are significant numbers of Tamils in the UK and [wider] diaspora. But the aim is to play music from these different and distinct cultures.”

How much has South Indian music and cinema influenced you growing up? 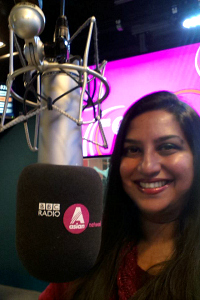 “Alongside watching one Hindi movie a week on TV in West Africa, where I was raised, watching South cinema has been my main connect to Indian culture. I had not visited India till 2001, so all my ideas about India were through the eyes of the small and big screen.

“I was also an avid reader of Filmfare, Cine Blitz as a teenager and through university, and as a child, we had Anantha Vikatan and Kumudam, which are South Indian magazines in Tamil, sent to us in Nigeria.

“My Dad weaned me on South Indian Classical and film music, on top of Western Classical and some pop, like the Beatles who were his favourite, back from his years studying in the UK.

“I would go to music classes to learn Carnatic music, which is the Classical form of South India, while also loving Michael Jackson and Madonna.

What advice would you give to young British Asians who desire a career in media?

“There is only one real piece of advice I can give to people. Be prepared to work very long hours. I often work around 16 a day and have done so, for 11 years now, including social media upkeep, travelling to places to get the job done, and hours behind a computer completing it all.

“With media, financial rewards should not be what one works for. That will come in time, as one builds it up. When I worked in the corporate world, I had a stable and rather large monthly salary. With media, especially with freelance work, it comes in bouts and the finances also come in the same way.

“I work every Sunday, with this show, and have been used to missing Sunday family events for many years now, as I do my Bollywood expert slots with BBC London and BBC West Midlands on Sunday evenings also.”

It is evident that Ashanti has opened doors for South Indians, making them a key part of the British Asian collective. With great music and engaging talks, Ashanti has quickly become a firm fixture on Sunday afternoons.