The 2015 FA Cup Final saw Arsenal thrash Aston Villa 4-0 in a thrilling contest. DESIblitz has a look at the key reasons for Arsenal being victorious.

Ozil, Coquelin, and Man of the Match Cazorla, all put in stellar performances.

Arsenal were hoping to win a record 12th FA Cup title, and to retain the title that they had won the previous year.

Whilst many Villa fans hoped that their beloved Claret and Blues would achieve the impossible, Arsenal fans were full to the brim with the confidence that the Gunners would prevail for the second year in a row.

The outcome seemed clear from the beginning. Villa seemed to be beaten as soon as they walked onto the pitch. By contrast, Arsenal were the picture of confidence.

DESIblitz explores what gave Arsenal that edge and took them over the finishing line. 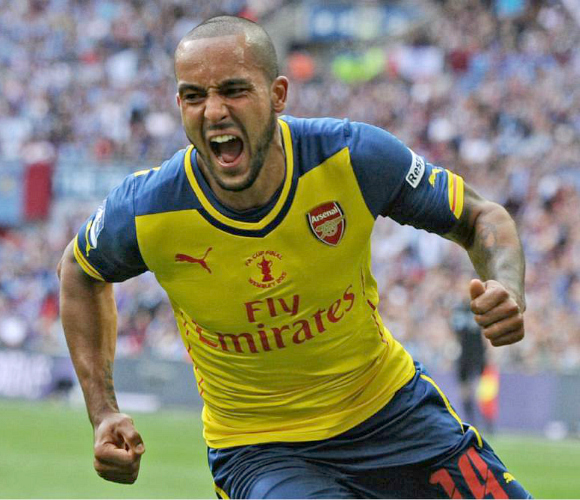 From the moment the first whistle blew, Arsenal were moving well, passing with ease, and were quick to act whenever Villa got a man on the ball.

By half-time, Villa had enjoyed less than 40 per cent of possession. When they did have the ball, they seemed timid and hesitant, and altogether overwhelmed by the occasion.

Silly mistakes were made each time Villa pressed forward for an attack, and they ended up giving the ball away too easily, too often.

With Walcott starting instead of Giroud, it was the pace of the former, rather than the power of the latter, which troubled Villa’s defence.

The incredible pace and movement of the Arsenal team was down to the guys in midfield, who really did tear the Villains apart. 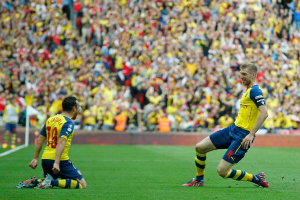 Ozil, Coquelin, and Man of the Match Cazorla, all put in stellar performances and Villa could not keep up with them.

Villa’s Tom Cleverly and Ashley Westwood were constantly bypassed by the likes of Ozil and Cazorla, who outclassed them at every turn.

The dominant Arsenal midfield was the engine behind all of their creativity and flair.

The Gunners’ midfielders continued to tenaciously stride forward, and maintain concerted pressure on the Villa defence. This was the story throughout the whole match.

On paper, Aston Villa were no competition for Arsenal. Arsenal’s star-studded line up were more experienced and more talented.

Despite often being the target of critics, Arsenal’s third place finish and their style of football demonstrates that they have a winning mentality.

This winning mentality is what saw them through the 2014 FA Cup Final. Unlike Aston Villa, their squad has experience of winning in big matches, whether it be the League, the FA Cup, and Champions League. 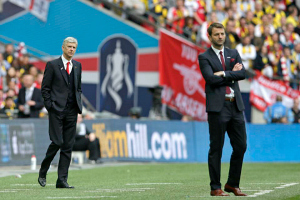 Arguably Villa’s best player was Shay Given. But the 39 year old could only bail his team out so many times.

When Walcott scored Arsenal’s first goal in the 39th minute, Given had a restricted view of the ball, as his own players were slow to get out of the way.

This was the breakthrough that opened the floodgates and Arsenal never looked back.

With just two shots at goal for Villa, Arsenal goalkeeper Wojciech Szczesny had a stress-free afternoon.

Young Jack Grealish struggled to rise to the occasion, and provided little threat. Nevertheless, the youngster has a bright future ahead of him.

Tom Cleverly was booked for a poor challenge on Nacho Monreal early on. This made it difficult for him in the later stages of the game in track down and stay in pursuit of Santi Cazorla.

Delph was probably the most lively in midfield for Villa. Despite barely having any room to show his dazzling skills, he tried to drive his team forward on a number of occasions.

But he lacked rhythm and composure, and thus his attempts to penetrate Arsenal’s defence were unsuccessful.

Christian Benteke was named as one to watch after his improving performances of late. However, even he failed to impress and was rather anonymous for most of the match.

In the end it all came down to desire. Once Villa conceded their first goal, the momentum shifted. Arsenal were able to capitalise and assert their authority.

For much of the first half Villa contained the Arsenal forwards. The last line of defence, Shay Given, pulled off some tremendous saves.

It was a surprise that Arsenal did not score sooner. With the constant pressure, they finally managed to score, and the floodgates were opened.

Arsenal were the team that wanted it more on the day. They possessed the better tactics and were more ready for the occasion.

Villa lacked both the desire and the skill to beat Arsenal. In retrospect, it is no surprise that Arsenal won so convincingly.

Man of the match, Cazorla said afterwards: “We played well, we were very focussed on the game.”

Manager Arsene Wenger was delighted with the performance of his team:

“We have shown today we are a real team. We made progress. After a different start we finished well and I’m very happy.”

Arsene Wenger is the first manager to win the cup six times. Arsenal have become the eighth team to retain the FA Cup.

By earning a record 12th FA Cup title, Arsenal are the most successful side in the FA Cup’s 144-year long history.