UK’s prime pubcaster has a commitment to diversity and inclusion. We explore how diverse BBC local radio stations are in terms of line-ups.

“Such a naturally funny couple sad to see them go.”

The BBC has a public service responsibility to steer a more representative and inclusive audio community. However, evidently, this has not fully come into effect and fruition within BBC local radio.

Despite funding to boost BBC radio diversity, there is a lack of it, particularly when we look at daytime programming.

BBC Radio WM gave a glimmer of hope when they roped in Sunny and Shay, but that too feels short-lived.

Very little has been replicated by the Sunny and Shay model, with few South Asian presenters hosting day-time shows and that too on weekends.

Though, the situation is somewhat more favourable to presenters from the black community when it comes to more prominent mainstream daytime shows.

Ticking that Box or a Stark Reality 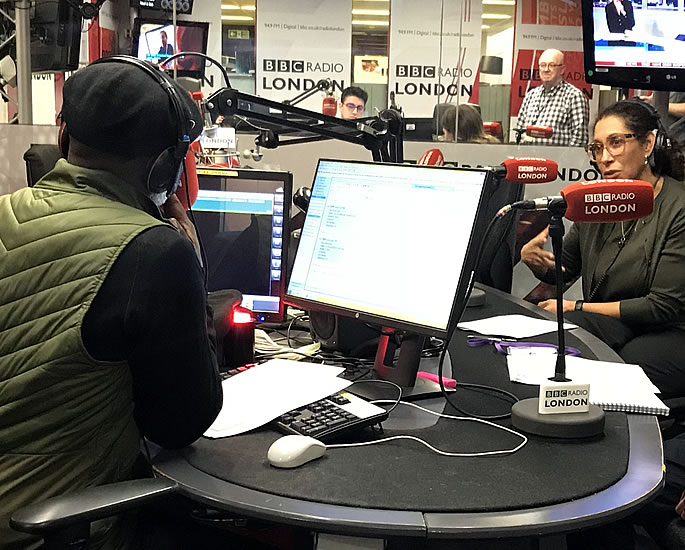 The diversity and inclusion picture of BBC Radio at a local and regional level is pretty grim and concerning.

This is especially the case when it comes to South Asian representation with presenters, programming, and audience fulfillment.

With such a lack of diversity, this begs a key question. Is the broadcaster fulfilling its public service mandate?

The BBC layout its mission, stating that it is:

“To act in the public interest, serving all audiences through the provision of impartial, high-quality and distinctive output and services, which inform, educate and entertain.”

As part of its charter, one of the main purposes includes:

“The BBC should reflect the diversity of the United Kingdom both in its output and services.”

The mission and charter are all well and good on paper.

However, is the BBC actually reflecting, representing, and serving UK’s diverse communities on BBC local radio? – particularly in refection to South Asians and members from the black community.

Preliminary research indicates a mixed bag with gloomy ground realities when observing schedules for over 35 local radio stations during the week commencing January 10, 2022.

British Black presenters of African and Caribbean heritage have been given relatively a good slice of the programming and scheduling.

Dotun Adebayo with BBC Radio 5 Live merges into BBC local radio weekdays from 1 am to 5 am.

Similarly, Natalie Graham has a slot across various BBC local radio stations on a Monday, Friday, and Saturday between 10 pm and 1 am.

It is important to note here that Jeanette was a former British sprinter. She won silver at the 2008 Valencia World Indoor Championships.

Moreover, Kofi Smiles (BBC Humberside: Mon-Fri 6 am-10 am) and Toni McDonald (BBC Hereford Worcester: Tue-Wed 6 am-10 am) have the all-important breakfast time slots.

Other black presenters have late peak time slots between 7 pm-10 pm as well as having airtime during Fridays and the weekend. 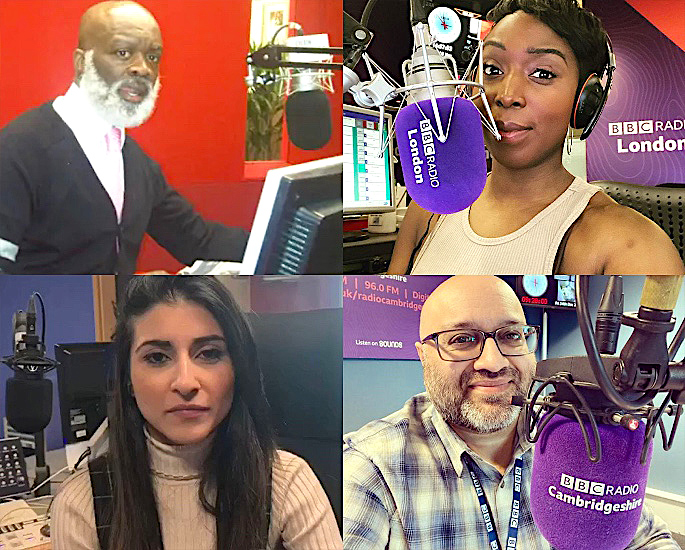 There is a slight gender imbalance in that there are many more female South Asian presenters in comparison to their male counterparts.

Perhaps this is to encourage and promote woman empowerment.

Likewise, female South Asian presenters have the edge over their male counterparts for peak daytime slots during weekdays.

Whilst it is good to see hosts of colour in the radio hot seats, South Asian presenters are clearly playing second fiddle to presenters from the black community.

Secondly, South Asian broadcast journalists hardly get an eye in at BBC Radio WM and BBC London, without a single presenter during daytime weekday slots.

Are South Asian presenters just making up the numbers on BBC local radio? It seems so, with no concrete representation.

Instead of consolidating diversity and inclusion, some of the stations have gone in a negative direction, especially during the pandemic.

You can find more about the schedules for BBC local radio here, containing the names of hosts. 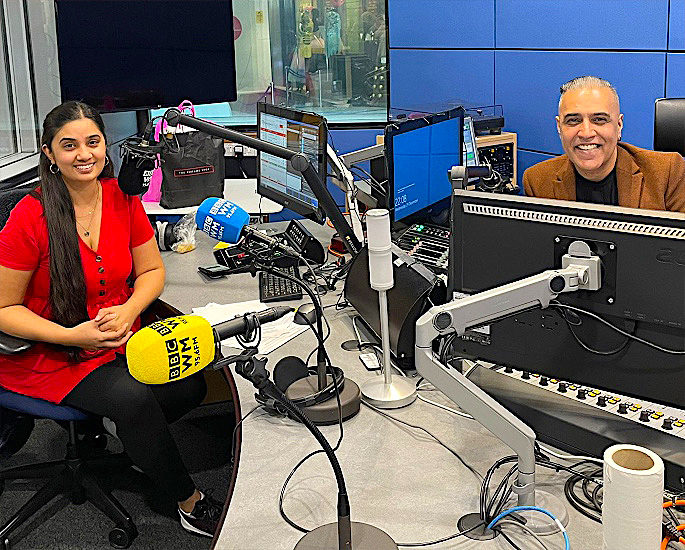 Former Radio WM and popular presenters, Sunny and Shay left the biggest local station outside of London after seven years.

After hosting the daytime show for five years at WM and then doing late nights across eight BBC local radio stations within the Midlands, the successful broadcast couple did their last show on December 29, 2021.

Whilst no one stays in one place forever, leaving the station had come as a shock to many.

Following their departure announcement via Twitter on December 19, 2022, a fan of theirs named Dbett was quick to react in the conversation section of the Birmingham Mail:

“Such a naturally funny couple sad to see them go.”

Besides, winning over audiences at WM, Sunny and Shay acted as the perfect bridge in narrowing that gap between a lack of diversity and not overlooking important events of ethnic minorities.

During their time at WM, they became trusted voices and presenters who reported about the untold stories from minority communities residing in the West Midlands.

They also interviewed the biggest stars who came to the Midlands. This includes Robert Lindsey, Amanda Hilda, Beverley Knight to name a few.

This accumulated to them having a good following on social media too, along with receiving prestigious awards.

Collecting the ‘Best Local Radio Award’ at the New York Radio Awards is one of many accolades under their names.

With so much positivity surrounding their work, why did they have to leave WM?

Reports had earlier suggested that due to the pandemic they were being taken off air temporarily during the daytime.

“In line with government guidance to cut down on all but essential travel, Sunny and Shay Grewal’s BBC WM late show for the Midlands will for the moment be presented by Gagan Grewal.”

However, the husband-wife duo never made a return back to the daytime slot, leading them to eventually say their goodbyes late in 2021.

Despite WM’s most high-profile British Asian presenters moving on, diversity seems to have become a backburner once again.

As of the week commencing January 10, 2022, the WM schedule line-up features no presenters of colour, on the main daytime shows between Monday and Thursday.

Even if the station had intentions of bringing fresh voices and sounds, surely there was enough South Asian talent across the region to replace Sunny and Shay.

Instead, we see a predominately white presenter line up at the station, with some diversity starting from Wednesday 7 pm onwards, leading to the weekend

With June Sarpong being Director of Creative Diversity, why is she not questioning such decisions? 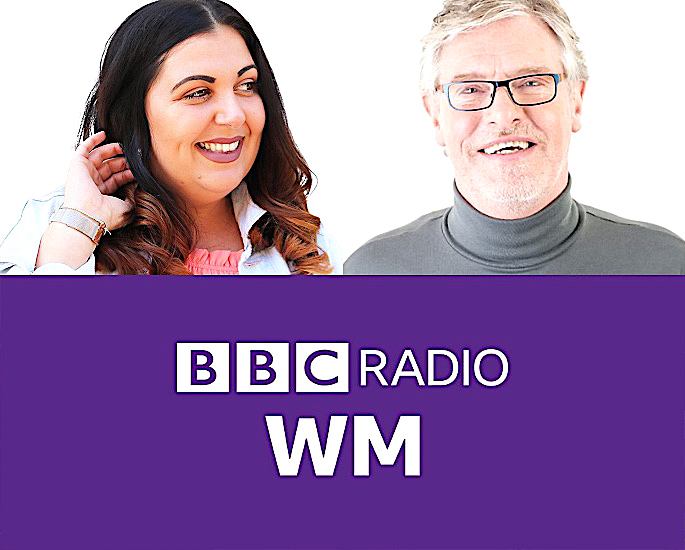 On the contrary, Amansinghy, co-founder of the famous Mr Singh’s Pizza was quick to campaign using a historic hashtag on Twitter and question Sarpong.

His emphasis was on the whitewash of BBC Radio WM, which is otherwise meant to be reflective of all communities in the West Midlands.

Besides putting up pictures of BBC WM daytime presenters, Amansinghy wrote on December 22, 2021:

“The current daytime lineup on @bbcwm anyone spot anything wrong? Is this representative of the people of West Midlands? #bbcwmwhitewash”

He also came to the defence of Sunny and Shay, questioning the Midlands station:

“One of the most refreshing aspects of  @SunnyandShay afternoon slot was how they brought a relatable aspect to the daytime programming bringing together all cultures across our diverse region.

“How will that continue now @bbcwm?”

At this point, multi-award-winning disability and inclusion specialist, Shani Dhanda, also went on to share her thoughts with a key stat:

“The West Midlands is one of the most ethnically diverse regions in the country.”

“17.3% of the population are from black, asian minority ethnic groups, 2011 census. @bbcwm  schedule/presenters must reflect that. @rhodritd  what’s going on?”

She also took the opportunity to highlight BBC Asian Network for not having “no visibly disabled presenters.”

In addition to these reactions, BBC is clearly failing to hit diversity targets.

According to an annual report from the public service broadcaster, BAME representation in leadership positions and senior roles falls short.

At the local level, this can be a big hindrance, particularly in strategising a solid diversity and inclusion plan.

Naturally, with little or no diversity at the local level, it will affect audience development. It will also not act in the interest of a multicultural United Kingdom.

The Radio Joint Audience Research (RAJAR) has informed us that the BBC can provide figures on individual shows.

Hence, it is difficult to assess on what were the core reasons for replacing Sunny and Shay.

Nevertheless, further independent research into local BBC radio would be very useful. Post-research key findings and recommendations would need to be made public for transparency.

This way the license fee payer can also understand if the BBC is meeting its mission and particular diversity purpose as set out in its charter.

More importantly, many want to know what is missing across BBC local radio to help increase diversity and inclusivity.

Further to this article being published on January 14, 2022, the BBC communications team in England, supplied us with a statement as follows, as a right to reply.

A BBC spokesperson said:  “We are fully committed to being an inclusive organisation which reflects the diversity of the UK on radio, TV and off screen. It’s an ongoing process and we are working to improve representation all the time.”

Whilst, the BBC as a whole are working to improve their diversity and inclusion agenda, we hope to see better diversity kicking in the near future when it comes to South Asian representation in the UK.

Asif is an Investigative Journalist who has a keen interest in law, immigration, arts, travel and sports. His motto is “The highest reward for a person's toil is not what they get for it, but what they become by it,” John Ruskin.