Amir Khan appeared to have broken Covid-19 rules again when he took to social media and bragged about his ‘surprise’ birthday party.

"All the boys are here... So, basically it was a surprise"

Boxer Amir Khan has allegedly breached Covid-19 rules after a birthday party was held on December 8, 2020, with at least 18 people in a lavish mansion.

The former world champion posted a video of the large gathering on social media, telling the camera:

“All the boys are here.”

Amir claimed that the party was a “surprise” with his family and friends also appearing to have hired a private chef and installed a huge sign in lights displaying his nickname ‘King’.

A huge cake was made by staff at Zara Cakes Manchester in Prestwich and it was delivered to an address in Manchester.

However, it is not known where the party was held, although it is thought that a property was hired.

It is believed that the chef was Alex Beard, a three Michelin star-trained chef who charges up to £160 per person for bookings. The menu included steak, chicken and sea bass. 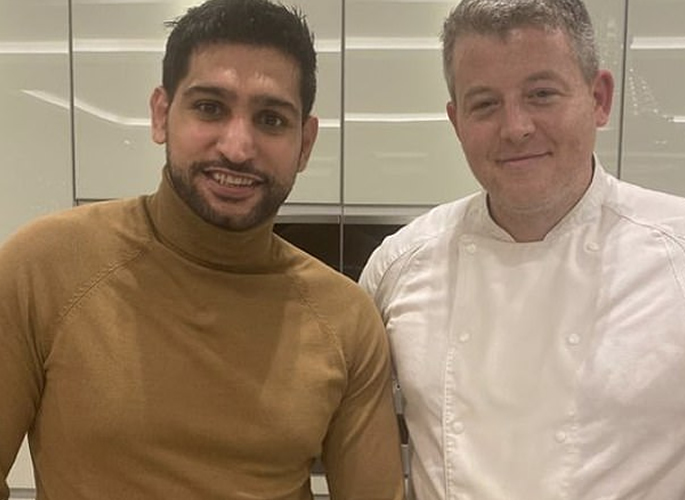 In the video, Khan, who was celebrating his 34th birthday, says:

“All the boys are here… So, basically it was a surprise for me – and they did this for me as well, ‘King’.

“So it was a birthday surprise in the house where I had dinner with everyone, my close friends. And we’ve brought Lamaisah along as well – Lamaisah!”

A source close to the boxer told the Daily Mail that the party was not at Amir’s home and had been organised by his wife Faryal Makhdoom and eldest child.

The other two children are with his mother-in-law in New York. Amir’s family members were not invited.

It is the fourth time during the pandemic that Amir has been accused of breaking Covid-19 rules.

Six weeks prior to the party, Amir Khan allegedly broke two-week quarantine rules after travelling from New York to the UK and failing to self-isolate.

He posted pictures of him with his daughter Alayna at Staten Island Mall before sharing another photo of him in London taken nine days afterwards.

Amir also visited ex-diplomat of Pakistan, Mansoor Raja, at his home in London during the two-week period.

In a further Instagram story, he posed with his arms around a group of four friends.

The father-of-three was also previously accused of breaking lockdown restrictions in August 2020 when he celebrated Eid with friends and family in Bolton.

And in May, he was also reported to have flouted the rules after meeting up with his parents following a long-running feud, so they could meet his son, Muhammad Zaviyar, for the first time since he was born.

Amir, who has still been travelling throughout the pandemic, went on holiday with his wife Faryal to Dubai in September, with the pair sharing photos from the luxury destination.