Amir Khan was arrested on Friday 4th July on suspicion of assaulting two teenagers. He has since taken to Twitter to refute the allegations as ‘nonsense’.

"Don’t believe what you read. I’m home with my family and no one got beat up."

Amir Khan was arrested on Friday 4th July after allegedly attacking two teenagers, assaulting them in the street as they returned from a mosque.

The 27-year-old former World Champion boxer and Olympic silver medalist, was arrested after the incident occurred in the early hours of Friday, in his home town of Bolton.

Witnesses of the event claim that the incident began when a member of the group was accused of making derogatory comments to one of Khan’s friends.

One witness said that she had seen Khan get out of his car: “Then he drove off and there was a man on the floor,” she added. 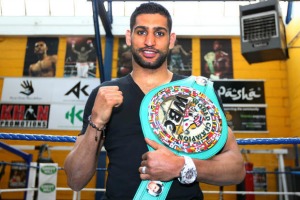 A police spokesman said officers had been called shortly before 1.30am on Friday after they received reports of an assault on Russell Street, in the Heaton area of Bolton.

He said: “Officers attended Russell Street and discovered two 19-year-old men had been assaulted. Their injuries are not serious.”

A spokesperson from Tangerine PR, which represents Khan, later confirmed that he had been arrested: “Amir Khan was arrested on suspicion of common assault in the early hours of Friday 4th July.

“Amir has since been released without charge on bail pending further inquiries. At this stage we are unable to comment further on this matter.”

Khan has been released on bail until mid-July. Rather than keeping a low profile over the weekend following the incident, the boxer has taken to Twitter to refute the allegations.

He even launched an #askamir session in which followers could ask him anything. However, he did not answer any questions regarding the events of Friday night.

Instead, Khan tweeted a series of statements about the incident. He said: “All nonsense please don’t believe what you read. I’m home with my family and no one got beat up.”

This is not the first time that Khan has been subject to police investigation. In 2006 the former WBA and IBF light welterweight champion was arrested after a pedestrian was injured in an accident with his BMW 654 convertible. 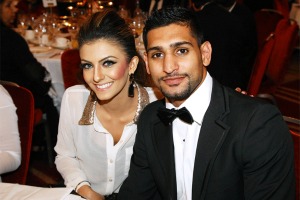 Khan was cleared of dangerous driving after police inquiries, but he was convicted of driving without due care and attention. For this incident he was fined £1,000 and banned from driving for six months.

More recently, in October 2012, Khan and his brother Haroon were involved in a brawl with gang members in Birmingham in an incident after a night out in the city.

This latest incident occurs only a few months after Khan became a father for the first time: his daughter, Lamaisah, was born on May 23rd of this year.

Khan insists he remains family orientated, and has also done much charitable work in the past. He was among those celebrities who raised £1,000,000 for the victims of the 2004 Indian Ocean Tsunami.

In 2007 Khan also worked with Channel 4 to produces a programme entitled Amir Khan’s Angry Young Men, which centred on troubled young men in the UK. The series aimed to use the disciplines of boxing, coupled with faith and family values, to help them re-focus their lives.

Yet, Khan’s valuable charitable work, being an inspiration to young British Asian men, and focus on family values all sit uncomfortably alongside his encounters with the police.

Police investigations regarding the events of July 4 are still ongoing. This case highlights yet again the stark contrast between Khan’s ability to enact positive change through his celebrity status, and his often volatile lifestyle.