On the Kapil Sharma Show, Akshay Kumar spoke about the audience questioning the number of films he does, and said, “Who asks such question?”

"Why are you getting angry? I simply asked."

Akshay Kumar appeared on the first episode of The Kapil Sharma Show’s latest season, along with the cast of his recent film Cuttputlli.

Kapil shared an ‘uncensored’ look at the episode on his YouTube channel.

In a playful and snarky manner, the actor trolled Kapil Sharma, when the host asked him, “Who is a serial killer?”

In Cuttputlli, Akshay plays a detective on the hunt for a serial killer terrorising the town of Kasauli.

Akshay joked that Kapil is the real serial killer, and asked him how many shows have been cancelled because of him.

Kapil then replied to him and said that he did not cancel shows and was on a season break. Kapil said, “Humari bhi family hoti hai.”

Talking about his favourite genre, Akshay Kumar said that he enjoys doing films with a blend of comedy and action.

He further took a jibe at people questioning the number of films he does every year.

Akshay said that for the first time people are asking him, “Why do you work so much?”

He said, “Who asks such questions? Have you ever heard parents asking their children, ‘Why do you study so much?’”

During his conversation with Akshay, Kapil Sharma told the audience, “When the shooting of Cuttputlli was going on in London, there was a rumour that the film was titled Mission Cinderella. It was later changed to Cuttputlli.”

He then asked Akshay, “Did a priest ask to do it or didn’t it get the visa?”

“After my film Mission Mangal worked, someone said take Mission Cinderella. Just because.”

He also added, “How can it be Mission Cinderella? It’s a psycho-thriller. What can be its mission?”

In his response, Kapil Sharma said, “Why are you getting angry? I simply asked.”

However, the actor blamed himself for the failures.

At the trailer launch of Cuttputlli, he said, “If my films are not working, it is our fault, it is my fault.

“I have to make the changes, I have to understand what the audience wants.”

“I want to make changes, I want to dismantle my way of working and think what kind of films I should be doing. Nobody else is to be blamed but me.”

The actor has a slew of projects lined up, including Ram Setu, OMG 2 and another untitled project with Emraan Hashmi. 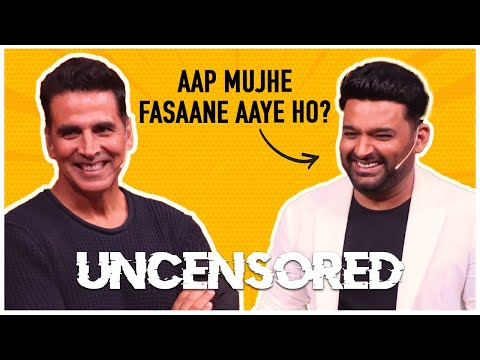 Ravinder is a Journalism BA graduate. She has a strong passion for all things fashion, beauty, and lifestyle. She also likes to watch films, read books and travel.
‘Arora Sisters’ series to focus on Malaika & Amrita’s lives
Is Kriti Sanon dating her ‘Adipurush’ co-star Prabhas?