Dressed in an Azzi & Osta couture gown at a L’Oréal Paris event in Mumbai, Aishwarya Rai is set to dazzle us once again at Cannes Film Festival 2016.

Bollywood’s timeless beauty Aishwarya Rai has just given us a taste of what to expect from her glorious return to the Cannes Film Festival 2016!

Complete with long wavy curves and an angelic smile, the 42-year-old star transforms into a breathtakingly beautiful walking mermaid.

Looking infallible herself, the Sarbjit (2016) actress is the perfect ambassador to introduce the brand new Infallible Cannes 2016 Collection. 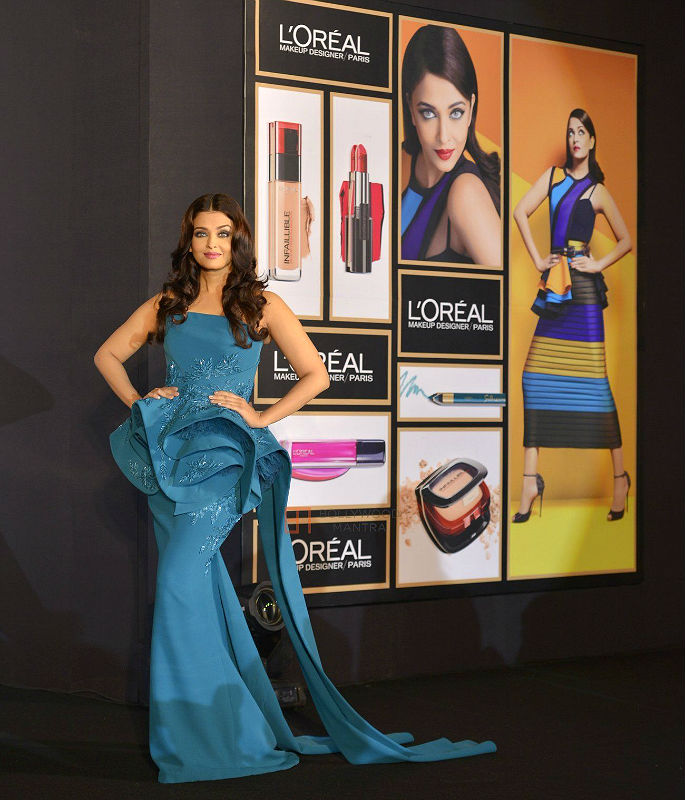 The new makeup range is a beauty essential for women with busy lifestyles. From Infallible Silkissime Eye Pencils, liquid foundation to Le Gloss and lip liners, they will give you a flawless look that can last up to 24 hours.

Embracing and empowering ‘the daring woman who lives her life on her own terms’ is at the heart of this collection, as the slogan says: “I may not be infallible, but my makeup is.”

Cannes 2016 will mark Aishwarya’s 15 years as well as L’Oréal Paris’ 19 years with the prestigious film festival.

Speaking at the launch event, Ash reminisces her incredible journey at Cannes with the French cosmetics brand, fellow ambassadors and her beloved family.

“It began with Devdas, then being a jury member, then first time I came here for L’Oréal, then getting to know my other brand ambassadors.

“There are changes that happen within the company and in the festival, so I had to embrace that. Then I got married, and wherever I went, people were congratulating me. So I keep joking, ‘My marriage reception went on for two years’.

“I delivered Aaradhya and I came back here again. She was six months old when I first got her to Cannes. Then again when she was one-and-a-half, two-and-a-half and now three-and-a-half. So I keep saying this to everyone that the ‘and a half’ portion of Aaradhya always gets completed here at Cannes.”

Aishwarya’s partnership with L’Oréal and various fashion designers has seen such a phenomenal success that even taking a break to start a family could not diminish her appeal and glamour.

It is simply amazing how she manages to stay unbelievably beautiful all these years. Check out our top picks of her looks at Cannes and you will see why we can never get enough of her!

Ash will be making her grand arrival on the red carpet at Cannes 2016 on May 13 and 14, followed by Bollywood fashionista Sonam Kapoor on May 15 and 16.

Raagjeet Garg, general manager of L’Oréal Paris, also confirms Katrina Kaif will not be returning to the festival due to prior commitments.