Aishwarya Rai and Sonam Kapoor star in the stunning new advert for L’Oreal’s Color Riche Collection, where ‘pink is more than a colour, it’s an obsession’!

Bollywood and Hollywood have united to create the ultimate L'Oréal advert.

L’Oréal has brought together the world’s most beautiful women, including Aishwarya Rai and Sonam Kapoor, in its new ad campaign.

For years, we have seen the cosmetic brand’s ambassadors star in their individual beauty commercials.

Now, the biggest A-listers in Bollywood and Hollywood have united to create the ultimate L’Oréal advert for the ‘La Vie en Rose’ lipstick range.

Showcasing the Collection Exclusive by Color Riche, the ladies look delicately stunning as one by one, they enter the room and gather around a grand piano.

They drape themselves in silky satin gowns, whilst wearing peach, nude and tea pink shades of the collection.

Ash takes her place beside her long-term friend, Eva Longoria, whilst Sonam situates herself next to the ever radiant Jane Fonda.

Katrina Kaif, who is also a L’Oréal ambassador, is notably missing from the advert, despite having filmed a section of the commercial with Julianne.

Regardless of Kat’s absence, the Bollywood girls completely steal the show with their angelic presence.

Putting on their personal style into the L’Oréal advert, the two Bollywood stunners leave us gasping for breath at the latest cosmetic hype.

But this isn’t surprising, especially for Ash, who is now the brand’s veteran after shooting countless advertisements.

Sonam, however, is a more recent addition, making her commercial debut for L’Oréal with this advert. 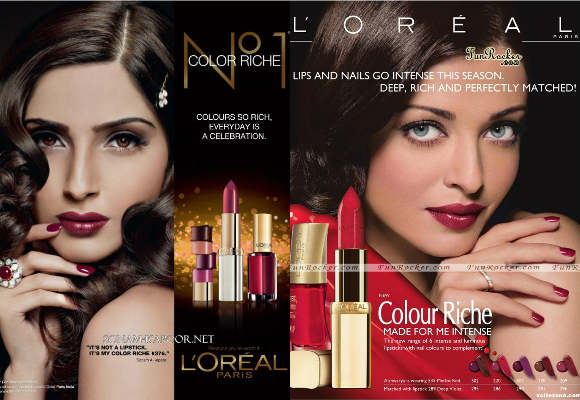 But that’s not all the two stars have been up to. Aishwarya is currently making her big screen comeback, promoting her role in the movie, Jazbaa (2015).

She has also been making headlines with her latest Twitter spat about the four-day meat ban in Mumbai during the Jain festival.

Our country is going to remain a 3rd world nation because of the intolerant misogynistic close minded few. https://t.co/JcIDEC3gQE

@imimiselfi it’s not only about the ‘meat ban’ sir it’s a critique about the general mentality..

Admittedly, her true forte is fashion and fans will be kept happy as long as she looks super gorgeous like in the L’Oréal ad!

Ranging from nude to grenadian pinks, L’Oréal’s new lipstick range will be available in UK stores from October 1, 2015 for £6.99.