Is it Acceptable to Help Illegal Immigrants?

Illegal immigrants coming to the UK from the sub-continent is no new thing. But once they are here, is it acceptable to help them? We explore the question.

With immigration on the agenda in the politics of most of the Western world, the question of illegal immigrants and what happens to them once they are in a country like the UK arises.

New generations of British Asians are now well settled in the UK. But this was not the case when the first migrants, especially, men, arrived in the country from the sub-continent with influxes of immigrants from India, Pakistan and Bangladesh.

At that point, the majority of South Asians in the country were immigrants mainly coming to Britain to help rebuild it after World War II. With work in abundance and the opportunity to earn good money and send it back home, the country became a magnet for such migrant workers.

In later years, the wives and children of the working immigrants arrived in the country. Leading the men and their families to settle in Britain and not return home.

This led to still a huge desire for those still living in the homelands, especially men, to go abroad, to work, earn money and support families back home. By legal or illegal means.

Gradually, unscrupulous so-called ‘agents’ in the sub-continent setup methods and means, especially for men, to travel to the West illegally. Charging them incredible amounts of money for the ‘privilege’. 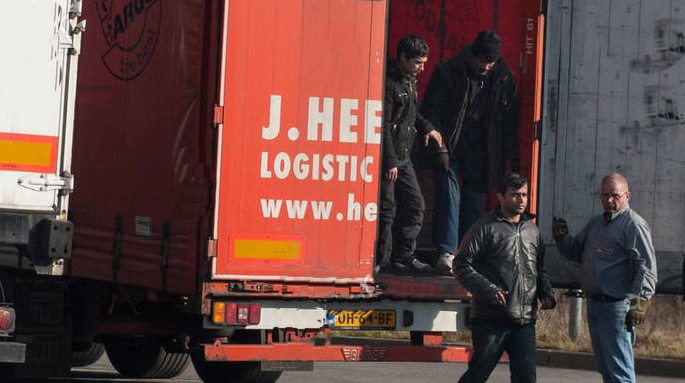 Resulting in families selling land and possessions to pay agent fees just to get the chance to go abroad, albeit illegally.

Travelling illegally to the UK is still practised today in some way or form and tends to use routes via mainland Europe. For example, firstly by ship and then using designated lorries in Europe to transport the illegal travellers to their destinations in the UK.

Because the answer can lead to issues within the community, family dilemmas, guilt, a sense of ‘we owe them this help’, fear and many other things.

DESIblitz discussed the issue with the well-known Immigration Lawyer, Harjap Bhangal, to understand the matter in more depth.

So, it is right to help illegal immigrants who are in the UK?

“Morally we are taught we should try to help any human being in need. It is a personal choice. It also depends on what type of help they need. If they want you to help them break the law then you are exposing yourself to risk too. However, if one needed medical assistance then would you really say no??”

So, helping a fellow human being in need is definitely not seen as wrong at all. However, it still raises the question of the legal right and wrong.

If you know they are here illegally, what should you do?

Harjap provides the options you have for this question:

“You have two options. The first to report them to the authorities (police, immigration or Crimestoppers). Or the second option: to do and say nothing.”

Therefore, choosing an option entirely depends on you and your conscience. If you feel you must do the right thing then reporting them to the authorities is the correct option. But if you know you cannot cope with doing so, then you need to be happy with the choice of not saying or doing anything.

Those that are here illegally, still are often helped. So, why is this?

“People feel sorry for them. Most are from poor backgrounds and essentially only want to work and earn money. Despite the myths, illegal immigrants have no access to benefits so they mostly work cash in hand. They live in overcrowded homes with other illegals in squalid conditions and often live in fear of getting caught. People feel an attachment to them as they understand the struggle to establish yourself in a foreign land. However, a lot of illegal immigrants are often exploited by people pretending to help them too,” explains Harjap.

This is exactly where tensions can arise between older and younger generations within the Asian community.

Younger generations may feel that they should do the right thing and report illegal immigrants. Whereas, the older generation, still feel they are offering help to relative or friends no different to them.

Tarsem, a young student, says: “I think it is wrong to allow any immigrant to stay illegally. They should be reported. Yes, in the past I know families helped relatives get here and live here, but today we live in a different world and we need to make sure the country we live in comes first.”

Geeta, a grandmother, says: “It is important to help people from our homeland, if they are here, no matter how they got here. Many come from very poor backgrounds and this is their one chance to make a better life as long as they do no wrong.” 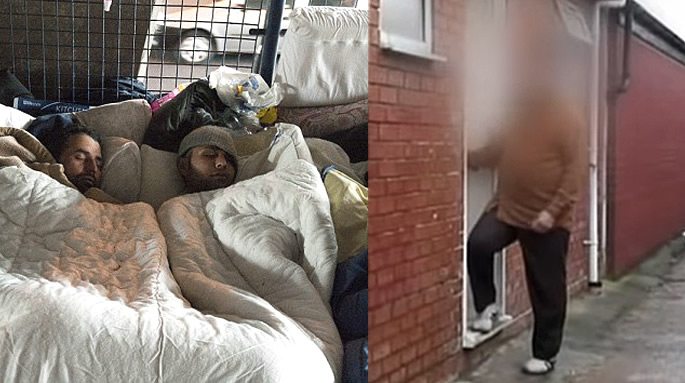 Once here, illegal immigrants do not live in the best of ways. Many live to work and live in dilapidated conditions, in small houses and converted sheds, which are often used by multiple immigrants living and eating together.

Jasmin, a student, says: “It’s common to see illegals living in old houses, especially, in dense Asian areas like Southall and Hounslow. A lot of them tend to stick together and avoid getting seen too much.”

Some live in a homeless state on the streets and find shelter and food wherever they can. Speaking of his experience, Jagdeesh, an illegal immigrant says:

“I’m in hell of London I thought I was going to paradise to England, I did realise that I’m worse than a dog in England. Back home in India my friends and family members are believing that I’m living in Buckingham Palace instead I’m living under bridge in M5(Motorway) amongst rats, rubbish, etc.”

Living constantly in fear of deportation and not having documentation, their working rights are limited.

Jagdeesh says: “I never thought been an illegal immigrant can be so difficult in Britain, me and my fellow Indian don’t have any documentation that reason we can’t work. Every day we go in car park outside Southall train station in west London standing like prostitutes for someone to pick us for very cheap labours.”

Money is the sole catalyst for illegal immigrants to come here. Gulzar, an illegal worker on a building site, says: “We have to do work we never ever dreamt of doing.  We clean latrines and toilets. All for money.” 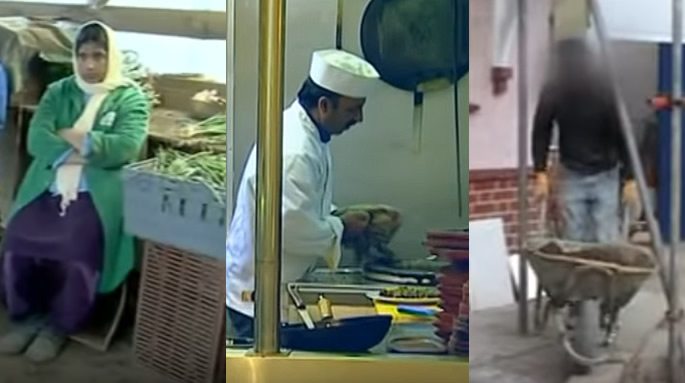 This black economy is, therefore, the product of illegal immigrants and the businesses that exploit their vulnerability. Especially, knowing they can pay them what they like and even blackmail them with the threat of reporting them.

Rana Sarwar, an illegal immigrant from Pakistan, could only find work in a restaurant and says: “It is like a sweet prison here. Being an illegal you can never earn enough money to return or even open a business here.”

Therefore, cheap labour-orientated businesses and crooked landlords are typical ‘pit-stops’ for illegal immigrants. But the crackdown on this is increasing.

If someone is helping or harbouring illegal immigrants, what can happen to them?

“Under new laws, you shouldn’t have any tenants who have no immigration status or you face a fine of £3,000 per immigrant found in your property. Also, if found employing an illegal immigrant you could face a £20,000 fine per worker,” responds Harjap.

Ashok, a business owner, says: “Employing illegal immigrants may look like a win-win for many Asian businesses, especially restaurants. But why would you risk all your hard work and money on such cheap labour which is so risky now? Not worth it I say.”

With the influx of asylum seekers, there are lots of illegal immigrants who are simply stuck in the UK in limbo and for them, it is just simply a case of survival.

Senthuran Rosendrum, an illegal immigrant from Sri Lanka, whose stay has been revoked, told Sky News:  “I don’t have a job. I don’t have any money. I’m struggling. Sometimes I sleep in a car. I am hiding.”

With immigration being a key driver for the Brexit vote, it’s getting tougher for illegal immigrants and the UK government is eager to address the problem.

Included in the many schemes by the Home Office, one is called the Voluntary Returns Scheme. Where illegal immigrants are being ‘paid’ to leave the country by giving  free flights, money to start up businesses and help with finding schools for their children at their destination.

The effectivity of such a scheme remains to be seen but it is evident, things are not like the past anymore. 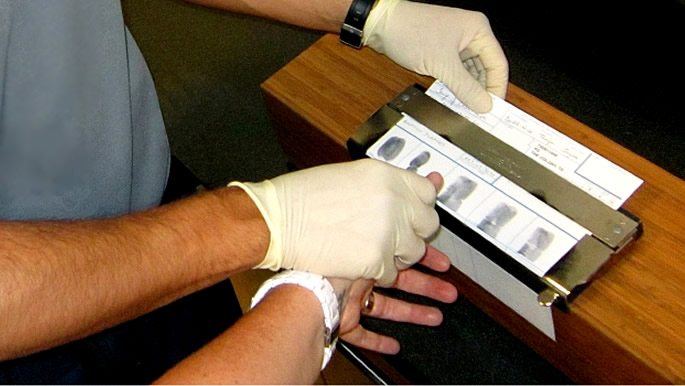 Where before, getting to the UK and living illegally was seen as a viable option, is it still the same?

“It is becoming harder to stay in the UK illegally. Since 2008 all people are fingerprinted before being issued a visa. So, therefore, overstayers are easier to identify and return when caught. Also under new laws, people must have a visa if they want to register with the NHS or even get a job, get a driving licence, rent a home or open a bank account. before the NHS, banks, and even national insurance numbers were easy to access for illegal immigrants,” explains Harjap.

Immigration will always be a hotspot for political gains and illegal immigration is likely to continue until more resources or methods that really work are applied to address the problem.

Therefore, helping illegal immigrants in the country, especially from the homelands, is presented as a moral duty or a choice. As a moral duty, it requires you to abide by the law and report them. As a choice, your decision needs to be made based on your personal views and beliefs to help them or not.