A BBC Special News team has uncovered a huge network of illegal immigrants living and working in the UK. This particular investigation unveiled mainly men from the Punjab region of India. The street term ‘ fauji’ has been used to describe these men which means ‘foot soldier’ in Punjabi and in this case, applies to […]

some pay in excess of £8,000 to leave their country

A BBC Special News team has uncovered a huge network of illegal immigrants living and working in the UK. This particular investigation unveiled mainly men from the Punjab region of India. The street term ‘ fauji’ has been used to describe these men which means ‘foot soldier’ in Punjabi and in this case, applies to hard grafting, challenged individuals who have no real identity.

The undercover report which included secret filming by reporters posed as fellow immigrants, highlighted the problem in Southall but it is evident from the findings that it is a UK and Europe wide issue. Findings revealed large numbers of them are coming into the UK to work and earn money to primarily send money back home. Majority of them not fluent in English are guided by the network and community around them.

Most have come using so called agents and networks operating in the UK and Europe and pay a lot of money to get the chance to do so. It is known that some pay in excess of £8,000 to leave their country and arrive in the UK. The experience is dangerous and they endure bad conditions such as in the back of trucks via routes through other countries including Russia, Eastern Europe and France. Journeys like these to get to the UK have taken them up to a year to complete.

Once here, they seek stay on false documentation provided for them at further costs. The documentation is produced and provided to them by criminals specialising in illegal immigration support, who can get them whatever they need at a price. The report found that these costs were around £250-£500 for a document. This includes production of passports, driving licences and national insurance cards which resemble originals exactly. Passports reproduced are mainly European passports from countries such as Portugal, Belgium and Italy.

Living accommodation and conditions for them are a case of whatever they can find or be given through the network. Resulting in housing not designed for so many people. For example, a terraced house which has at maximum three bedrooms, is housing up to nine men. They all live under their own strict guidelines to avoid being caught such as not opening the door to anyone or communicating who they are to anyone they don’t know. A major luxury for them is possibly a TV to share as they seldom leave the house unless they go to work.

The work they are given does not guarantee pay and is usually is unskilled or skilled work for which they have no training e.g. building sites, restaurants and textile factories. Some work over 12 hours a day for about £2 per hour with no breaks, which is well below the UK minimum wage and does not abide by any health and safety regulations.

Due to their illegal status, they are not paying any tax or national insurance and are employed by mainly Asian employers who highly exploit them and take advantage of their illegal status. However, most of them work and live by the conversion rule in their head, which is that £1 gives them a lot more Rupees back home. So, their objective being to work in whatever conditions, earn and send money back home to better the lives of their families. Many come with this aim to earn and return. However, this does not always happen depending on their personal circumstances. Some even go through arranged marriages to obtain permanent stay status. 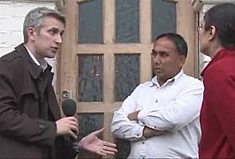 After completing the onsite undercover investigation, the BBC Special News correspondent, Richard Bilton interviewed one of the faujis, who stated that they were here to earn a living and were more than happy to pay taxes and national insurance if only they had the legal documentation and were accepted, even on a temporary basis and not permanent stay. He said over half of Southall is full of faujis and the Asians running businesses living here legally, are the ones taking advantage of them.

Reaction to the story has been mixed amongst Brit-Asian communities. Some are outraged and are not amused that this practice is going on as it is highlighting them in such bad light too. Others are not happy paying taxes whilst these people are not paying anything towards the country they are now living and working in. And some do sympathise with them not seeing them as being harmful and claim they are only here with the will to work hard and do not directly distract the lives of others.

The problem is not new but is still a major issue for the UK and other European countries. It is not just the Punjabi community who are part of this illegal activity as shown in this report but includes others such as Gujaratis, Tamils, Bengalis, Pakistanis, Polish etc. Therefore, making it a bigger problem for the authorities to manage and address. Immigration laws and policing this situation requires resources, time, effort and intelligence and hence, puts further demands on the government and local authorities to find ways of addressing this growing matter. This also does not exclude the responsiblity of the communities and businesses involved in this racket.

Jas likes to keep in touch with the world of music and entertainment by writing about it. He does like hitting the gym too. His motto is 'The difference between the impossible and the possible lies in a person's determination.'
Primark slammed for Child workers
Love Marriages better than Arranged Marriages?