A Tribute to Shammi Kapoor

Bollywood has lost another legend from the Kapoor dynasty. Shammi Kapoor passed away on 14th August 2011. This iconic star needs no introduction and is highly remembered for his sharp looks, style and ethics as an actor and person. We pay tribute to Shammi Kapoor.

"Without Rafi I was incomplete"

Bollywood has lost one of the most iconic and legendary actors of the big screen, Shammi Kapoor, who passed away in the early hours on Sunday 14th August 2011, at the age of 79.

Shammi Kapoor was known for his handsome looks, dance moves and sheer screen presence. Donned as the Indian ‘Elvis’ he added flamboyance and shimmer to his bold and wild youthful roles in his early films. No other actor can be compared to him for his unique contribution to Indian cinema.

Born on 21st October 1931, in Bombay as Shamsherraj Kapoor, he was the son of the veteran actor Prithviraj Kapoor. He was the brother of two other famous names in Bollywood, the great Hindi film maestro and godfather Raj Kapoor and unforgettable actor, Shashi Kapoor. 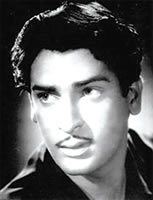 In his early schooling years Shammi attended St. Joseph’s Convent (Wadala) and then, the Don Bosco School. Shammi Kapoor then went to New Era School, at Hughes Road where he completed his matric. After then studying at Ruia College, Shammi joined his father’s theatrical company ‘Prithvi Theaters’ in Calcutta.

Shammi entered cinema in 1948, as a junior artist with Prithvi Theatres. He made his debut in Bollywood in the year 1953, when the film Jeevan Jyoti, directed by Mr. Mahesh Kaul. Chand Usmani was Kapoor’s first heroine.

After playing serious roles, it was not until Tumsa Nahin Dekha released in 1957 that Kapoor embarked on the stylish playboy image. Then, he appeared in the 1958 hit Dil Deke Dekho with Asha Parekh. But it was the huge hit Junglee released in 1961 which confirmed his new acting persona. Especially with the evergreen song ‘Yahoo Chahe Koi Mujhe Junglee Kahe.’ 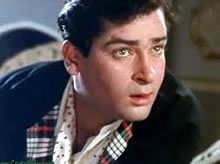 Talking of Junglee, in a BBC Asian Network interview Shammi said: “It was a great moment in my life, it was practically the first movie in colour that we did.”

The term ‘yahoo’ was strongly associated with Shammi Kapoor and it wasn’t Junglee where he used it first. He said: “I did the ‘yahoo’ in Tumsa Nahin Dekha before the Bhangra song Sir Peh Topi Lal, then I did ‘yahoo’ again in Dil Deke Dekho in the song Yaar Tau Chulbula Hai and eventually I turned it into a song in Junglee.”

As for what ‘yahoo’ meant, Shammi said:

“It was an expression, I felt very exuberant the whole thing about the boy having achieved his goal, he gets the girl and he goes yahoo!” 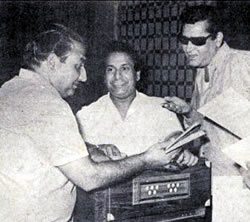 The voice of the legendary playback singer Mohammed Rafi was always well suited to Shammi Kapoor in his films. Rafi and Shammi were very close. Shammi was very fond of Mohd. Rafi and said: “Mohd. Rafi and I clicked absolutely. Without Rafi I was incomplete. He sang to what I wanted and the way I wanted to express in a song.”

Rafi said of Shammi: “If Shammi Kapoor was born as a leaf, that leaf would fall off dancing.”

One of the most loved aspects about Shammi Kapoor in films were his dance moves. He did his own choreography and steps and usually they were on the spot. No one has ever been able to replicate such exquisite and unique dancing in Bollywood. 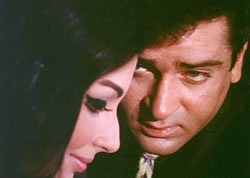 We’ve compiled a small taster of Shammi Kapoor songs to remember this great star, out of many many more hits: 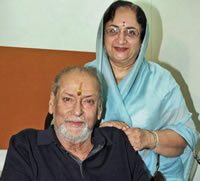 In his personal life, Shammi Kapoor was a huge heart throb for the ladies. He first married actress Geeta Bali who he met during the shooting of the film ‘Rangeen Raaten’ in 1955. They had a son, Aditya Raj Kapoor and daughter Kanchan. In 1965, Geeta died of small pox, leaving Shammi with two small children. Subsequently, he had a failed romance with actress Mumtaz but found love again in 1969, when he married his second wife Neela Devi Gohil from the Royal Family of Bhavnagar in Gujarat.

Shammi Kapoor was very well known for his bubbly personality and his big hearted approach to life. Everyone in the Bollywood industry respected him as an actor, director and guide. Ranbir Kapoor son of Rishi Kapoor was very close to Shammi and saw him as ‘Dadda’ and encouraged him to do a role in the 2011 Bollywood film Rockstar, seen as Shammi Kapoor’s last appearance on film.

One of the key interests of Shammi Kapoor was computers and the Internet. He was instrumental in bringing awareness of the World Wide Web to India. In his study he had many computers and he was the founder and chairman of Internet Users Community of India (IUCI). He also played a major role in setting up Internet organisations like the Ethical Hackers Association. He also maintained a website dedicated to the ‘Kapoor family.’ 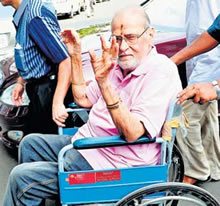 Shammi Kapoor suffered from chronic kidney failure and had to undergo dialysis at least three days a week. Monday, Wednesday and Friday were hospital days but he was always very upbeat despite the illness. His condition was complicated by low blood pressure and a chest infection which then resulted in renel failure and subsequent passing away in Breech Candy hospital in Mumbai.

Further to the news about Shammi Kapoor, the Prime Minister of India Manmohan Singh issued statement saying: “I am sad to learn of Shammi Kapoor’s demise. He was an accomplished actor who entertained millions and millions of fans in India and abroad. I share his family’s grief.”

The whole Bollywood fraternity has reacted to this major loss. 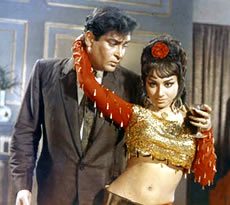 Sharmlila Tagore, Saif Ali Khan’s mother made her appearance with Shammi Kapoor in 1961 in Kasmir Ki Kali said: “He was a fun and loving person. He was completely over inhibition and full of life and this is what I learnt from him.”

Hema Malini who worked with him said: “The film fraternity has lost one of the most loved actors and a much adored human being. Shammi Ji and I had the most wonderful opportunity to work together. He was a live-wire on the sets and so enthusiastic about his works and very dedicated to giving the best.”

Many Bollywood stars have tweeted on Twitter and expressed their sadness to the loss of Shammi Kapoor.

Priyanka Chopra tweeted: “sometimes no amount of kind words can compensate for a loss! bhole baba ki jai shammi maharajji.. he was our guruji..im at a loss.”

Akshay Kumar wrote: “Live wire,flamboyant,legend are synonymous with Shammi Kapoor, the man who made me scream ‘Yahoo’ everytime I saw him onscreen,you will be missed sir, RIP”

Priety Zinta tweeted: “2 my all time favourite Shammi kapoor, my childhood crush & my reason 2 Yahoo.. May ur soul rest in peace ! U will live in R hearts FOREVER!” 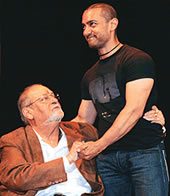 Shammi was very close to Bollywood actor Aamir Khan and his family. Aamir always approached Shammi for his blessings for all his film projects and productions as he saw him as his lucky mascot.

In a statement, Aamir Khan said: “Shammi uncle was and is and always for me the epitome of the joy of life. Positive energy and and a naughty spirit always flowed out of him. His big support and anchor in life is Neela aunty and my heart goes out to her at this time. Indians all over will be indebted to him for the joy he brought to our lives.”

Bollywood has indeed lost a huge veteran star who had created his own special place in Indian cinema with his stylish looks, hairstyle, flair and acting style on the silver screen and beyond. Shammi Kapoor will not be forgotten for his unique and iconic contribution to Bollywood and India.

Amit enjoys creative challenges and uses writing as a tool for revelation. He has major interest in news, current affairs, trends and cinema. He likes the quote: "Nothing in fine print is ever good news."
‘Aarakshan’ attracts ban in Indian States
‘Bodyguard’ a total box-office Hit