9 Best Indian Biscuits to Have with Tea

Biscuits and tea are a delicious, no-nonsense combination. We look at nine Indian biscuits to enjoy with a cup of tea.

they are often dipped in tea to sweeten things up.

In India when it comes to the perfect accompaniment to tea, you cannot go wrong with delicious Indian biscuits.

A hot cup of chai is arguably the most popular drink in the country.

But it is rarely enjoyed alone.

You can have dhokla or gathiya but enjoying tea with a biscuit is the most common combination.

India is home to many biscuits. Some are crunchy while others are soft. There are some varieties which are even savoury.

With that said, here are nine Indian biscuits that pair well with a cup of tea. 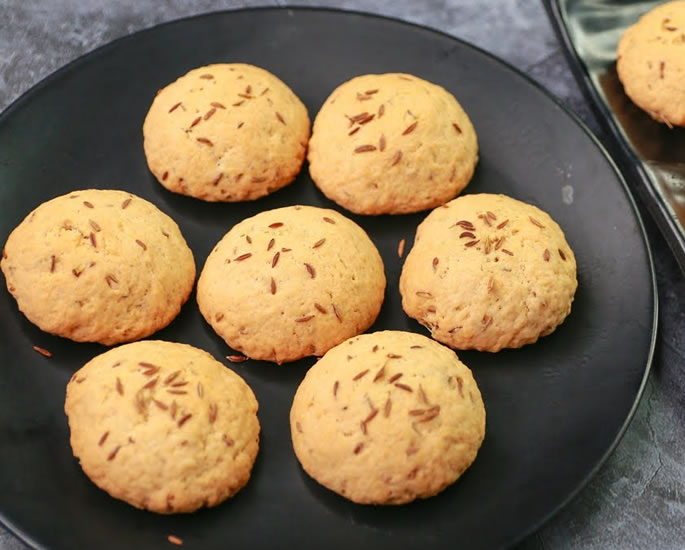 One of the easiest biscuits to make is jeera cookies.

They are made with flour, sugar, butter, salt and cumin seeds.

Cumin seeds are what make this biscuit unique and this ingredient enriches its flavour.

However, jeera cookies are not particularly sweet. In fact, they are quite salty.

Because of this, they are often dipped in tea to sweeten things up.

When dipped in the tea, the crunchy texture becomes soft and chewy, making for a nice pairing. 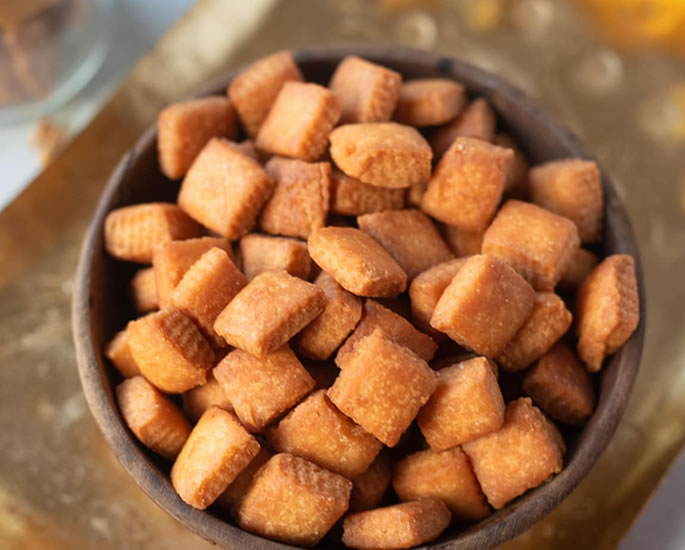 Shakarpara, or shankarpali, is a sweet biscuit made from maida flour.

They are typically made on special occasions and are known for their diamond shape.

Shakarpara is usually deep-fried but it can be baked. When baked, it is lighter in colour and softer. When fried, it is crispier and puffier in appearance.

A savoury version is made with carom seeds, cumin, crushed black pepper and salt.

On the other hand, the sweet version is made either with sugar or jaggery, semolina and ghee.

No matter which one is your favourite, both versions of this Indian biscuit go well with a cup of tea. 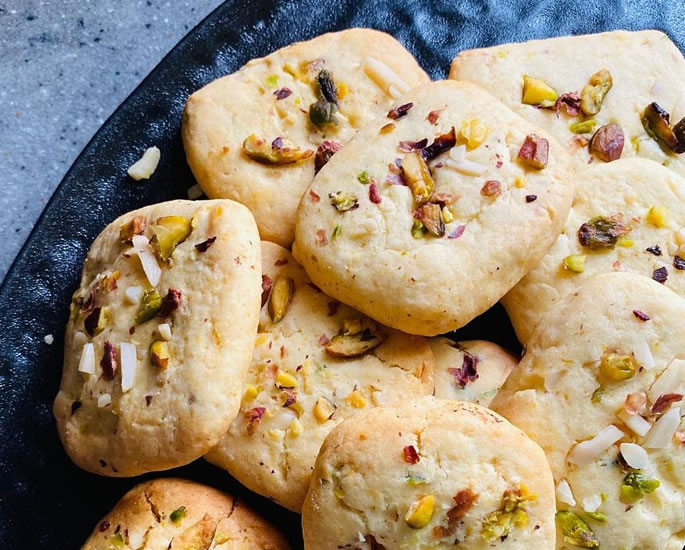 Dried fruits are healthy and biscuits are tasty, so the combination makes for the best of both worlds.

They are a popular biscuit in India and around the world, commonly enjoyed with tea.

Dry fruit biscuits are round in shape with a crunchy bite. But the inside is soft and melts in your mouth.

They are eggless and can be made with a variety of dried fruit. Some of the most popular options include dried cherries, raisins, cranberries and dates.

The addition of cardamom gives this biscuit an extra layer of flavour.

Some recipes also include nuts to add more texture.

It is a rich Indian biscuit that is naturally sweetened thanks to the fruit. 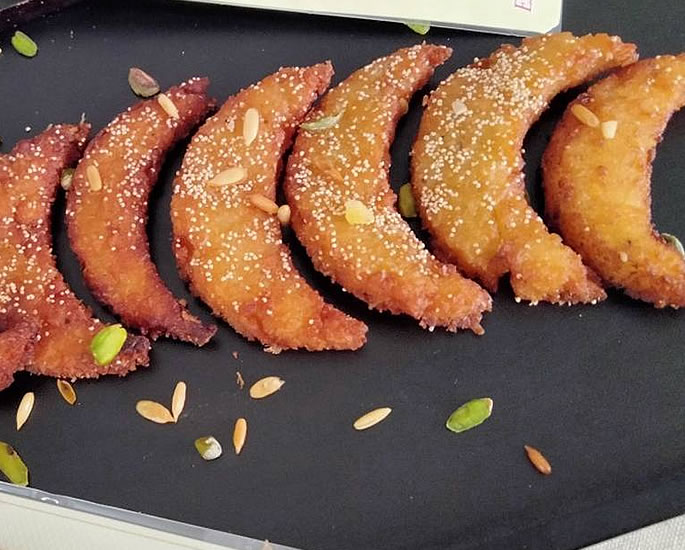 Chandrakanthalu are traditional fried biscuits that are typically in the shape of crescents.

They are made from moong daal, sugar, grated coconut, cardamom, saffron, cashew nuts and ghee.

The daal is first soaked before being ground into a paste and mixed with coconut and sugar. Cardamom and other spices are added, enhancing the flavour.

After being shaped, the biscuits are deep-fried in ghee until golden brown.

Chandrakanthalu has a crispy texture but once you take a bite, you will be surprised by the soft, chewy inside.

Chandrakanthalu is normally made on special occasions but if you are craving it, enjoy it with a cup of tea. 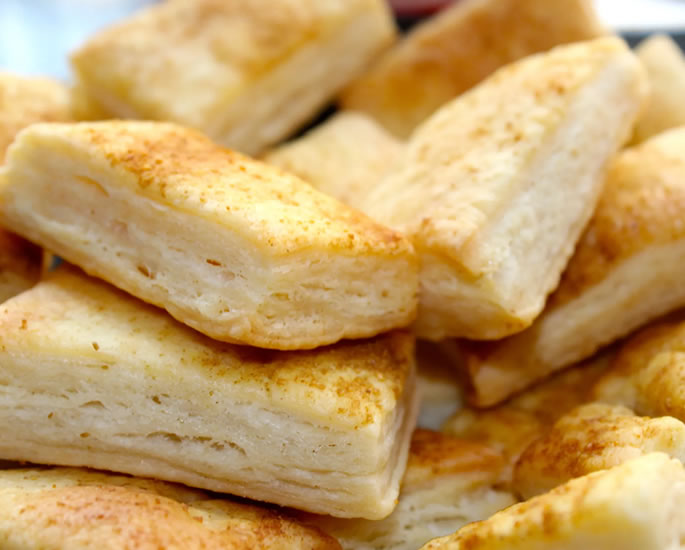 Khari is a light and fluffy biscuit made from flour and butter and baked until golden and crunchy.

This Indian biscuit is usually served alongside tea and when dunked, the chai is absorbed and turns the once flaky pastry into chewy bites.

While it is popular in India, it has European origins.

Both France and Spain claim their creation. Khari made its way to Iran and was part of the cuisine.

Khari was brought to India by Iranians fleeing their home country. These people opened cafes, where many Iranian snacks were first enjoyed by Indians. 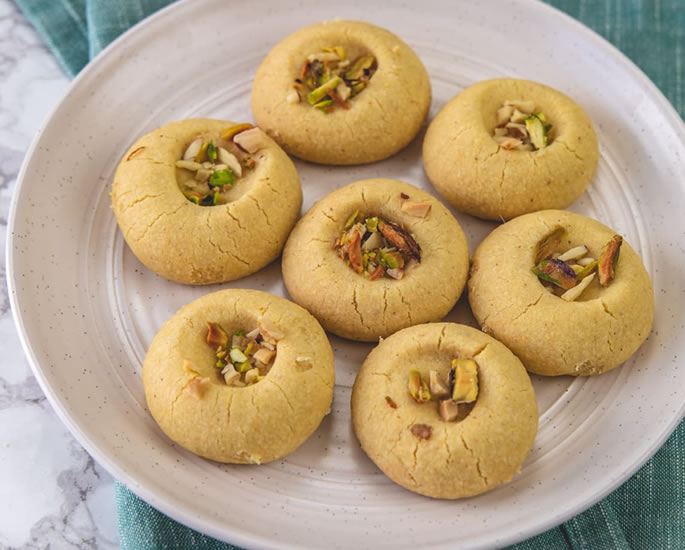 Nankhatai made its way to India after Surat was colonised by the Dutch in the 16th century.

Sometimes, called Indian shortbread because of its similarity, this biscuit has a soft, crumbly texture.

It is made with all-purpose flour, sugar, gram flour, yoghurt and ghee.

It also contains a number of flavourings such as cardamom, nutmeg, almond and pistachio powders.

The gram flour gives nankhatai a slightly nutty taste. Its softness allows it to melt in your mouth, especially when paired with hot chai. 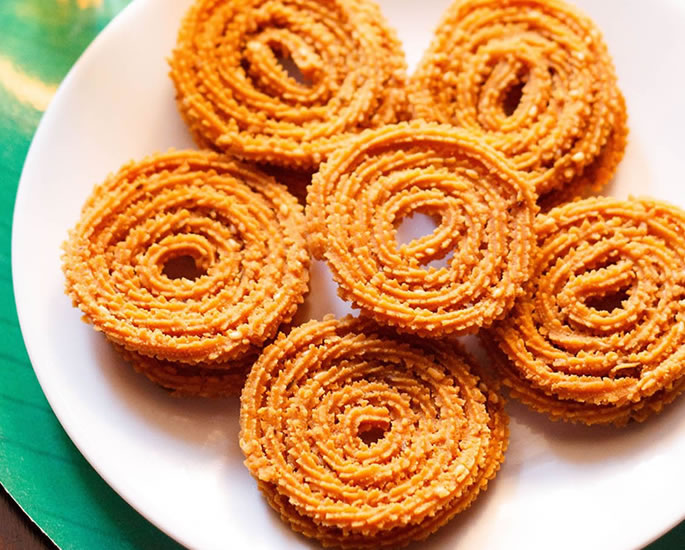 Chakli is known for its spiral shape and some might confuse it with murukku but the pair differs from one another.

Chakli is then deep-fried, giving it a very crunchy texture.

When dipped in tea, the biscuit softens and soaks up the flavour of the chai, giving it even more flavour. 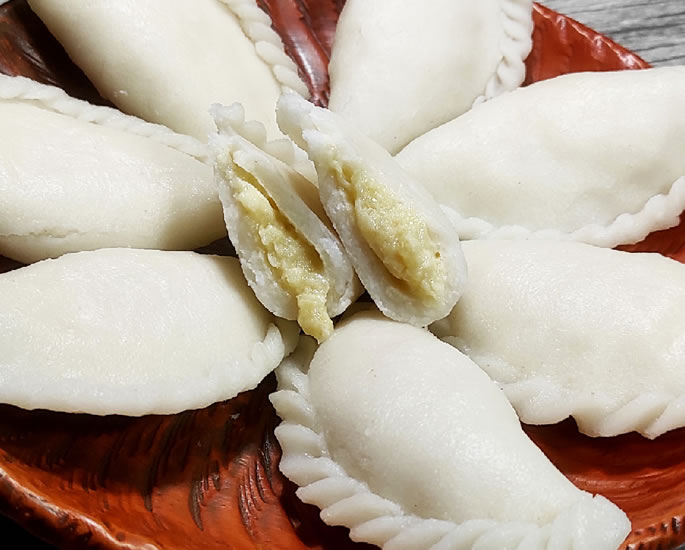 Pitha is a collective name for a variety of biscuits that are made in India and Bangladesh.

Pitha originated in India before making its way over to Bangladesh.

Some varieties include pakan pitha which is dipped in sugar syrup and bhapa puli pitha which has a sweet coconut filling.

They are usually prepared with rice flour along with wheat and cornflour. The other ingredients are added, depending on what version you want to make.

Unlike other biscuits which are baked, pitha is typically cooked on a stovetop.

Usually eaten for breakfast and with chai (tea), pitha is among India’s favourite traditional treats. 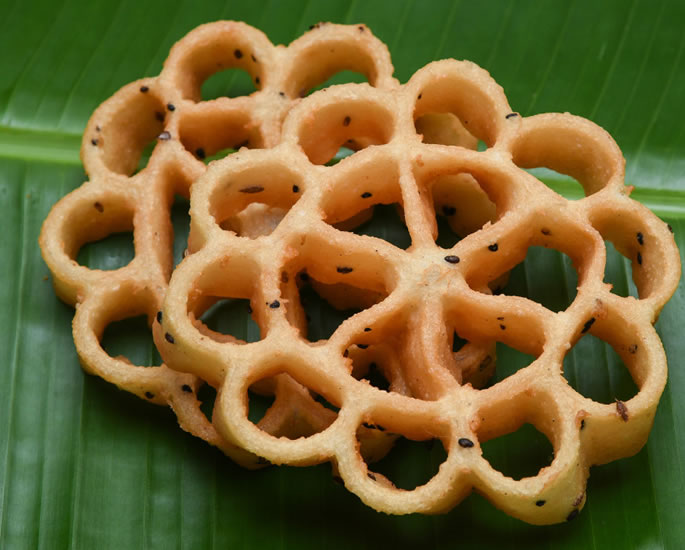 Achappam is one of the most unique Indian biscuits and it is mainly due to its floral shape.

They are made from a batter consisting of rice flour, eggs and coconut milk. For a richer flavour, you can add fennel and cumin.

To get the unique flower shape, you must get an achappam mould, an iron mould specifically designed for these biscuits.

The mould is heated in oil at a high temperature before being dipped into the batter. It is then placed into the hot oil again, creating a crispy shell.

The mould is removed immediately, leaving a crispy flower-shaped biscuit.

Achappam is delicate and sweet. They pair well with tea because the sweetness of the biscuits contrasts with the tea’s warming spices.

These Indian biscuits promise wonderful tastes and textures, meaning there is something for everyone.

They taste even better when paired with a flavourful cup of chai.

No matter what Indian biscuit you opt for, you can expect a burst of flavour when eaten alongside some tea.

Dhiren is a journalism graduate with a passion for gaming, watching films and sports. He also enjoys cooking from time to time. His motto is to “Live life one day at a time.”
5 Desi Dishes recommended by British Asian Mums
Video of Mops hanging above Domino’s Pizza Dough angers Twitter