13 arrests were made at a Bangladeshi Community Centre after a mass brawl broke out between two rival groups. 6 people suffered from minor injuries. DESIblitz reports.

“The police went to try to calm things down and ended up being attacked.”

13 people were arrested at a Bangladeshi community centre in Leeds, where a mass brawl broke out on May 30, 2015. Six suffered from minor injuries.

The fight erupted in the midst of the centre’s AGM. As a group of members arrived late, two rival factions began to argue about who should run the centre.

In a video captured on a mobile phone, members could be seen throwing chairs across the room, pushing people around and confronting police officers.

Even as the building’s fire alarm began to ring, the members were still raging and attacking each other with makeshift weapons.

Watch the video footage of the Bangladeshi brawl here:

Reportedly, the video has been watched over 100,000 times on social media. One of the police officers was clearly seen punching a man in the face in an attempt to calm the uncontrollable crowd.

An anonymous witness said: “Seeing the police officer throwing the punch was quite shocking but they were completely outnumbered.

“They went to try to calm things down and ended up being attacked as well so the fact that they retaliated is understandable.” 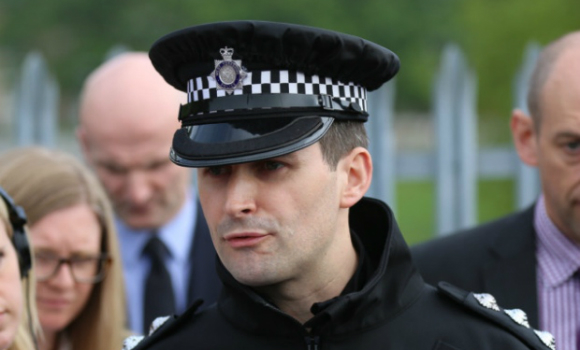 Later, a police spokesman explained the police officer acted out of self-defence, because the rowdy man tried to take his baton.

Mohammed Afzal Hossain, the community’s chairman, said: “We already knew that we might have trouble with them, so we had a couple of police officers at the meeting.”

He continued: “I said if they wanted to raise any issues they could in the question and answer session. But they didn’t come to talk to us about it, they came to start a problem.”

Adams added an investigation will be launched and reassured the public that police will work with the community centre to uphold the safety of the neighbourhood.