From ‘Mera Naam Joker’ to ‘Mulk,’ Rishi Kapoor had a remarkable career. DESIblitz showcases 12 best films of the celebrated actor.

Rishi Kapoor also familiar as Chintu was born into a Punjabi Family in Mumbai on September 4, 1952. He was the second eldest son of Bollywood powerhouse Raj Kapoor and his wife Krishna Raj Kapoor.

The filmy line was in his blood, with many family members taking up the acting profession.

After playing the adolescent in Mera Naam Joker (1970), there was no looking back for Rishi. He was at his peak from the early 70s to the late 80s, delivering super hit films.

After having a steady 90s, Rishi went into the millennium playing more character-based roles.

We take a look at 12 top Rishi Kapoor films, across various genres, including romantic, comedy, action and thriller. 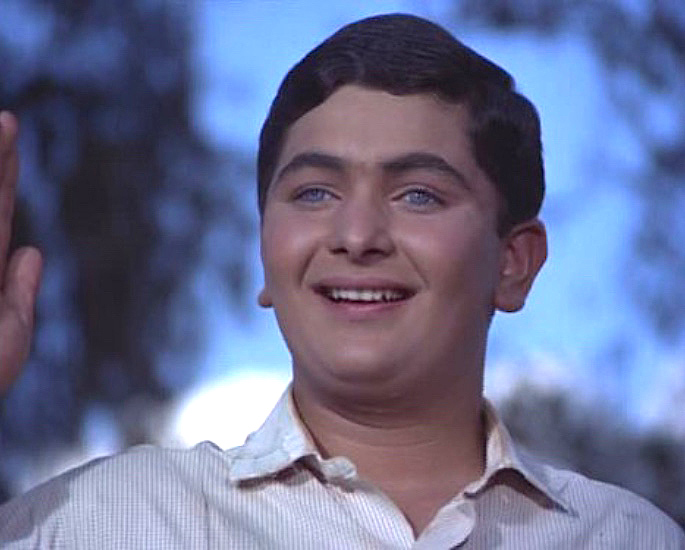 Mera Naam Joker is a lengthy autobiographical direction of Raj Kapoor. Rishi Kapoor has a small yet impactful role as the young dashing Raju in the film.

Son of a trapeze performer, Raju appears in the first chapter of the film, dictating the overall story.

He has a crush on his school teacher Mary (Sime Garewal), secretly following her at times. Mary helps Raju to build his confidence and explore a desire for femininity.

With Raju being younger to Mary, he makes an appearance at her wedding to David (Manoj Kumar). He gives a false impression of his true feelings during the ceremony.

Despite the heartbreak, Raju realises that all dreams do not come true. Thus, he takes Mary’s lessons on board and makes the decision to become a clown and make everyone laugh.

Rishi Kapoor won ‘Best Child Artist’ for his role at the 18th National Film Awards in 1971. 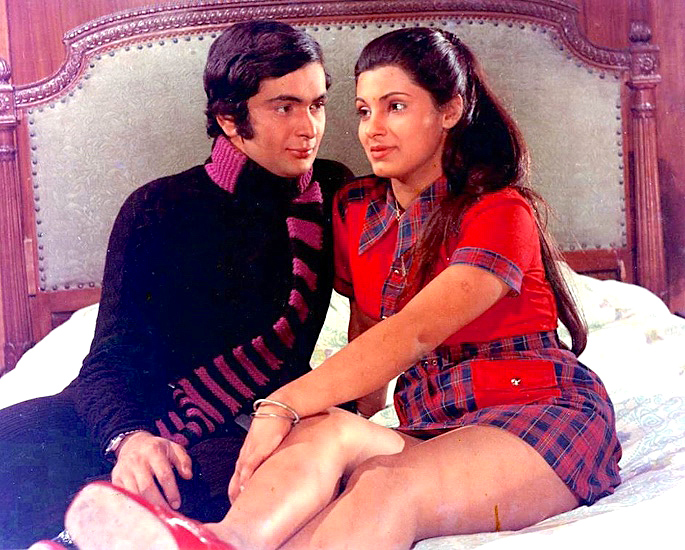 Bobby is a romantic musical film, which saw Raj Kapoor directing his son Rishi Kapoor in the film.

They claim that Bobby is the daughter of an ordinary fisherman, Jack Braganza (Prem Nath), Hence, her family cannot match their class status.

The two lovers run away but are then get kidnapped by baddie Prem Chopra. Mr Nath and Jack eventually save the two from the jaws of Prem Chopra.

Mr Nath finally accepts the union of Raj and Bobby as the film finishes on a happy note. Rishi Kapoor quickly became an overnight sensation as the chocolate boy hero with this film. 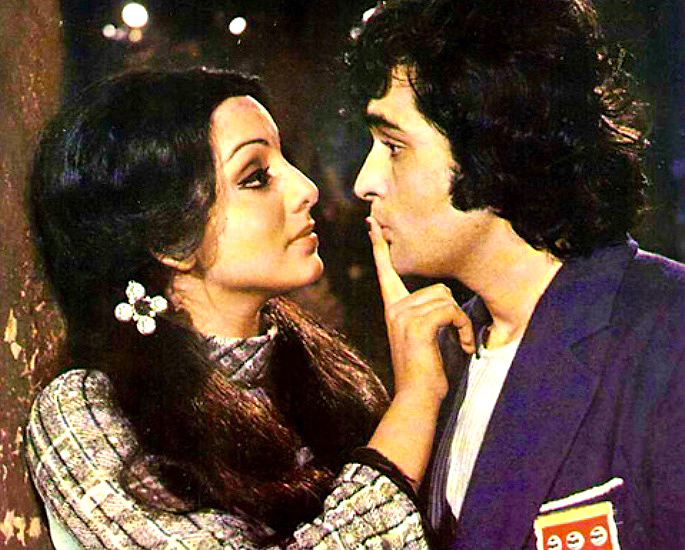 However, their joke comes back to haunt them. The three of them get embroiled with a wicked criminal and are framed for a murder.

Iftekhar is seen in a rare negative shade (Bhupendra Singh/Black Cobra), with Dev Kumar (Inspector Sood) on the contrary playing a positive role.

Aruna Irani also features in the film, taking the character of Sherry.

Rishi is also in prime form when performing to the song ‘Humne Tumko Dekha’ sang by vocalist Shailendra Singh. 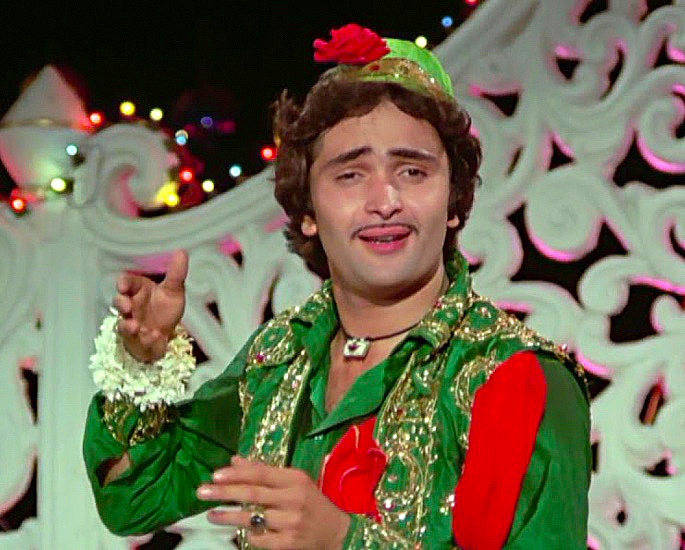 Amar Akbar Anthony is a family action comedy-drama by Manmohan Desai with a star-studded line-up.

Their ex-convict father Kishenlal has to, unfortunately, abandon them when going on the run from criminal Robert (Jeevan).

The three of them are brought up by three different families of various faiths.

Robert’s daughter Jenny falls in love with Anthony, whilst Lakshmi (Shabana Azmi) has a romantic connection with Inspector Amar.

Akbar has a few comedy scenes in the climax of the film as the three brothers deal with Robert and his gang. The film ends with the trio meeting their father Kishenlal in prison and driving away with their beauty queens. 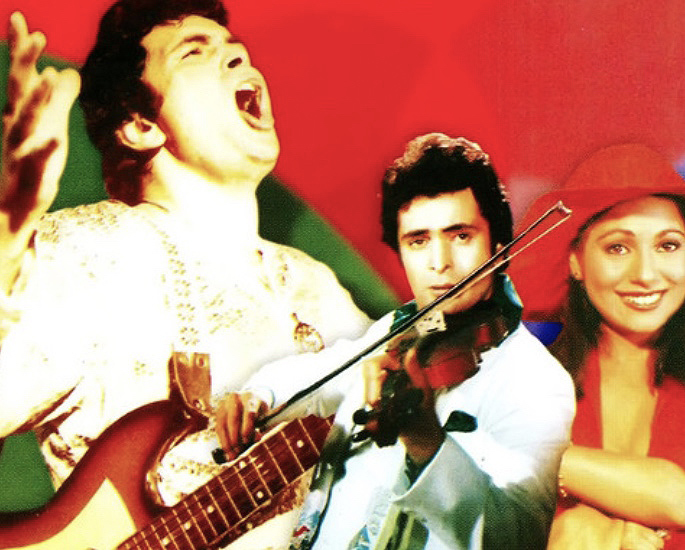 Karz is a thrilling reincarnation film, taking a leaf out of Madhumati (1985) made by Bimal Roy. The film is about rockstar Monty who has to take revenge for his past life as Ravi Verma (Raj Kiran).

As a result, Monty travels to Ooty in pursuit of Ravi’s former wife and killer Kamini (Simi Garewal).

Along the journey, he also manages to hunt down his sad and grieving mother Mrs Shanta Prasad Verma(Durga Khote) and sister Jyoti Verma (Abha Dhulia).

Additionally, Ravi falls in love with Tina at this beautiful and scenic hill station.

Her poetic uncle Kabira (Pran) blesses the two and helps Ravi in destroying Kamini and the villains led by the silent Sir Judah (Prem Nath).

The climax sees Kamini meeting her death, with Ravi and his family living happily together again. 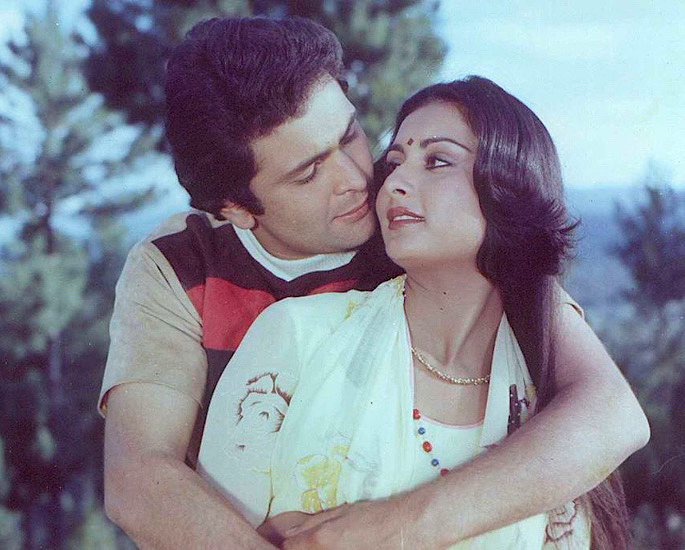 But then suddenly tragedy strikes when the two have an accident during a spiritual journey, causing disfigurement to Sunita’s face.

Whilst Vikram believes his mother that his wife is no more, Dr Sahni (Iftekhar) passes on Sunita’s case to Dr Mehra (Shammi Kapoor), a cosmetic specialist.

The second half sees Vikram not initially identifying Sunita after her successful transformation to Kusum Mehra (Tina Munim).

But when the two get on stage to sing the title track, and after questioning his mother, Vikram soon realises that Kusum is in fact Sunita.

The film ends with Vikram heading for Kashmir to renew his wedding vows and Sunita hugging him. 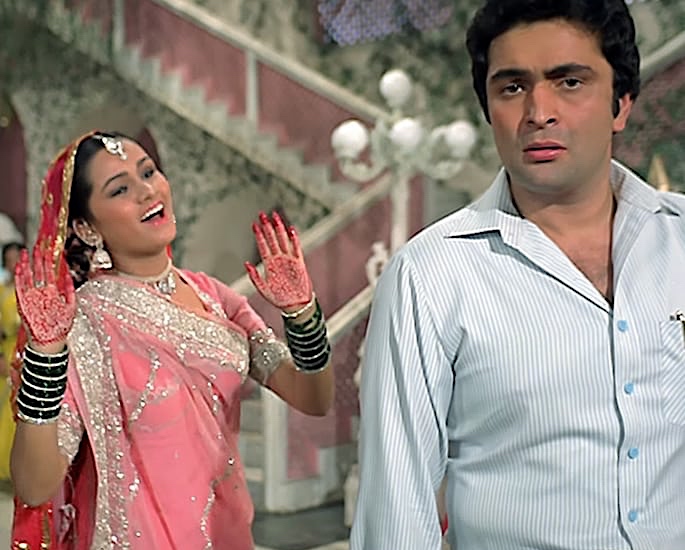 Helmed by father Raj Kapoor, Prem Rog is a Bollywood romance film. Devdhar (Rishi Kapoor) and Manorama (Padmini Kolhapure) are the lead characters in the film.

Devdhar who is a close of friend Manorama secretly loves her. But the poor orphan does not tell her as she belongs to a wealthy-elite family.

But soon after they marry, Kunwar Pratap Singh has a tragic accident, which kills him.

Devdhar then stands up for his love. This is after learning that widower Manorama is unreasonably treated upon returning to her family.

The magazine Cosmopolitan lists Prem Rog in their top ten “Most Romantic Films Ever.” 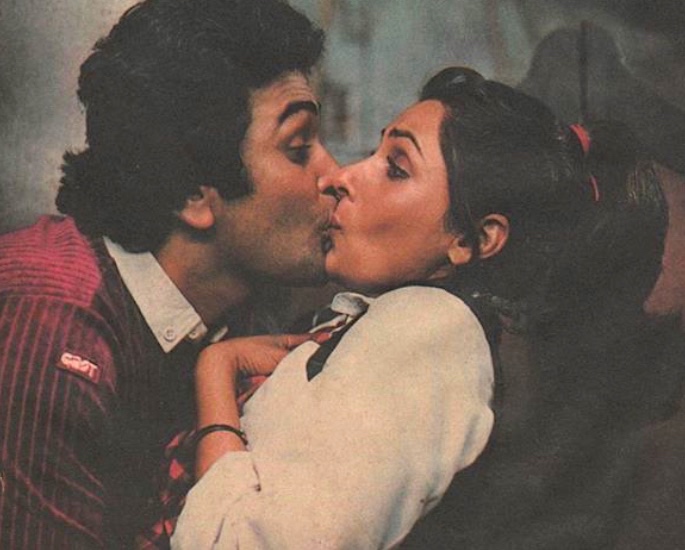 Saagar is a romantic love-triangle, set in the coastal town of Goa. The film saw the return of Rishi Kapoor (Ravi) and Dimple Kapadia (Mona) as a lead pair.

This was director Ramesh Sippy’s way of paying homage to Bobby made by Raj Kapoor. The story focuses on class differences, as the rich Ravi and simple Mona fall in love.

Ravi’s grandmother Kamladevi (Madhur Jaffrey) does not approve of his choice and tells him to marry some else.

Meanwhile, fisherman Raja (Kamal Hassan) who also loves Mona, is heartbroken when he comes to know about the relationship between Ravi and Mona.

The film finishes on a tragic note with the Chaplinesque Raja sacrificing himself. He comes to the rescue of Ravi as the villain Vikram (Shafi Inamdar) shoots him with several bullets.

Ravi and Mona feature in the two seductive numbers, ‘Saagar Kinare’ and ‘Jaane Do Na.’ 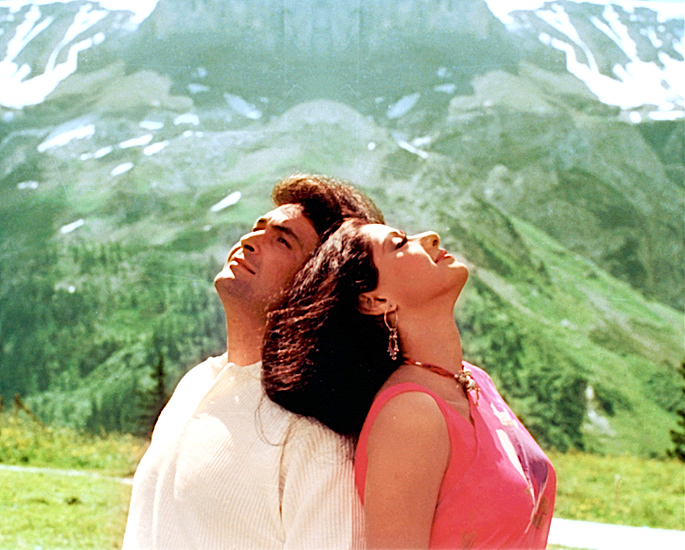 Chandni paves the way for love and music at its very best. The blockbuster film was made by Yash Chopra, with shooting taking place amongst some picturesque European locations.

The film follows the love story of Rohit Gupta (Rishi Kapoor) and Chandni Mathur (Sri Devi).  As the two are about to enter into wedlock, complications arise when Rohit suffers paralysis.

Subsequently, Rohit calls off the relationship, which makes Chandni very unhappy. Chandni then moves on and begins to work for widower Lalit Khanna (Vinod Khanna).

Meanwhile, Rohit who can no longer stay away from Chandni has a successful operation overseas and comes back into her life.

He also becomes friends with Lalit, not knowing that he has also fallen in love with Chandni. When he does find out, Rohit starts drinking to alleviate the pain of Chandni marrying Lalit.

Chandni cannot hold her feelings back and hugs Rohit. Fortunately, Rohit survives after being taken to hospital and the two get back together.

Lalit sacrifices himself, realising that Rohit and Chandni are meant to be together. Mrs Khanna (Lalits’s mother: Waheeda Rehman), plays a supporting character in the film. 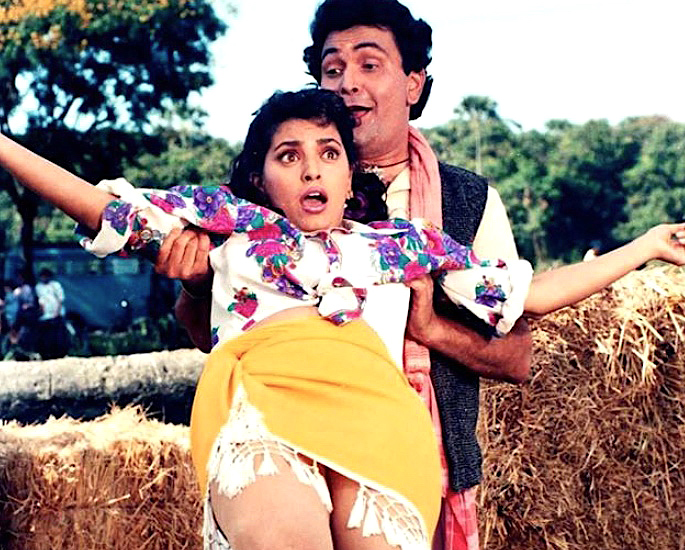 Bol Radha Bol is an action-thriller film, with a romantic element. Rishi Kapoor takes on a double role in the film, playing both the good (Kishan Malhotra) and bad (Tony).

In the film, the life of Kishan takes a turn for the worst, when he comes back home to realise that Tony has wrongfully taken his place.

His mother, Sumitra Malhotra (Sushma Seth), and even his loyal dog fail to recognise Kishan and instead believe the imposter Tony.

With the help of his lover Radha (Juhi Chawla), a village girl, Kishen then goes out on a mission to unravel the truth.

Kader Khan as Jugnu has a comical and important role in the film too.

Fans will remember the song ‘Tu Tu Tu Tu Tara’ from the film. David Dhawan was the director of this hit film. 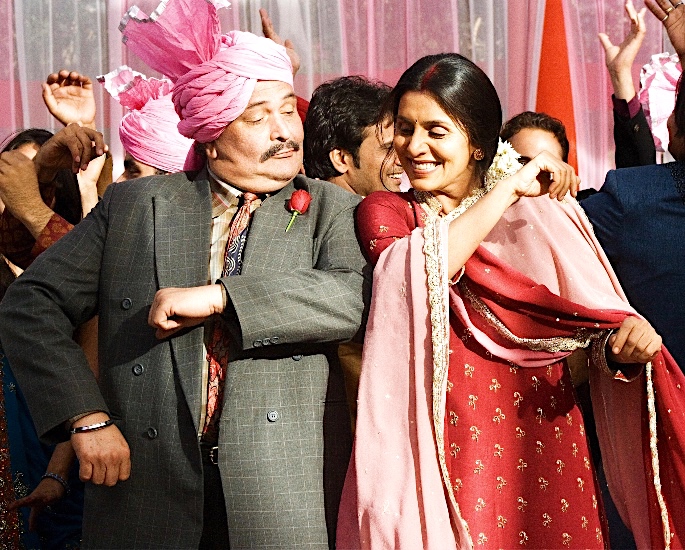 Do Dooni Chaar is a Disney India production, marking the directorial debut of writer Habib Faisal.

Rishi Kapoor (Santosh Duggal) is literally the driving force behind this film, along with his real-life and on-screen wife Neetu Singh (Kusum Duggal).

Rishi and Neetu made a return together in a film, following a thirty-year absence.

This wholehearted comedy-drama shows how a middle-class teacher and dreamer (Mr Duggal) keeps his family of four happily afloat, despite facing financial hardships.

The teacher travels to work courtesy of an old unrepairable scooter known as ‘Duggal Express.’

The ending of the film is enjoyable, with the Duggals steering their new Maruti Alto. Rishi Kapoor won ‘Critics Award for Best Performance’ during the 56th Filmfare ceremony in 2011. 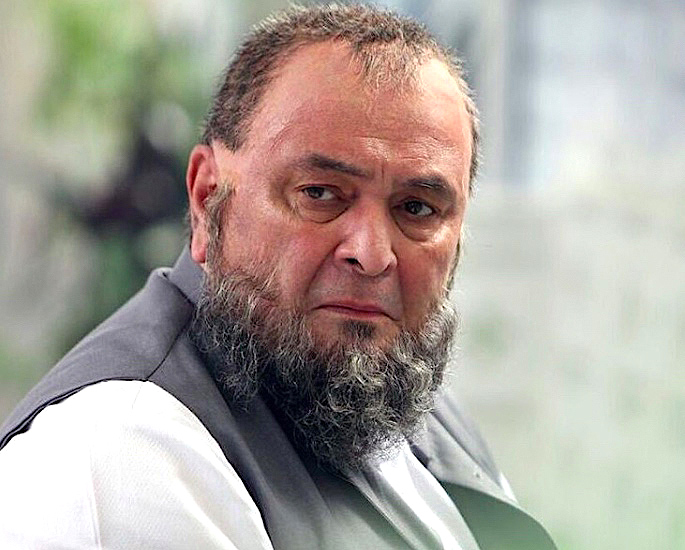 Taking inspiration from a real-life story, Mulk is about a struggling joint Muslim family, residing in a Hindu dominating town of India.

The family battle to regain their honour after a family member becomes a terrorist. Mulk had many positive reviews from critics and analysts. Leading the way was Taran Adarsh who put out a tweet saying:

Mulk communicates a vital message for a secular India. This is to not blame an entire group of people for the actions of a handful.

On April 30, 2020, Rishi sadly lost his battle to leukaemia, fighting the disease since 2018. During the late stages of his life, Rishi was very active on social media, expressing his views on several matters.

Faisal has creative experience in the fusion of media and communication and research which increase awareness of global issues in post-conflict, emerging and democratic societies. His life motto is: "persevere, for success is near..."
Pakistani Actress Fiza Ali caught in Fight in Car Park
Karan Johar & Zoya Akhtar organise COVID-19 Relief Concert