Twenty-year-old Safiyyah Syeed of Bradford has explained how boxing helped her to overcome her eating disorder.

"It got really bad. I was in denial a lot"

Safiyyah Syeed is aiming to compete at the 2024 Olympics in boxing and she revealed how the sport helped her to overcome an eating disorder.

As a teenager, Bradford-based Safiyyah was diagnosed with anorexia and bulimia.

When she began experiencing eating disorders, she had overcome a long-term unidentified illness that caused her to vomit regularly.

The initial mystery illness lasted two and a half years while Safiyyah was at school, often leaving her bedbound.

After overcoming the illness, Safiyyah wrote a “bucket-list”. It included skydiving, places to visit and boxing.

She said: “I remember the first time I walked into the boxing gym.

“I hadn’t even punched the bag yet – I had never boxed in my life, but I just thought this is my thing.”

Once strong enough, Safiyyah began training, but at that point, her eating habits began to suffer.

She continued: “I’d recovered from one illness and I got myself into another. It got really bad. I was in denial a lot at the start.”

Safiyyah’s doctors were confused by this new weight loss, with the teenager in denial and trying to hide her eating disorder. She was then referred to a mental health clinic.

She told BBC Sport: “I was taking it to a point where I was like ‘do I go down the boxing road or do I just go down a dark road that I’ve been down before?'”

Safiyyah eventually decided that boxing gave her a sense of purpose.

“That is so important to have, especially when you’re going through an illness or something where you need to find your way in the darkest times.

“That’s the thing that’s going to make you shine and get you through it.” 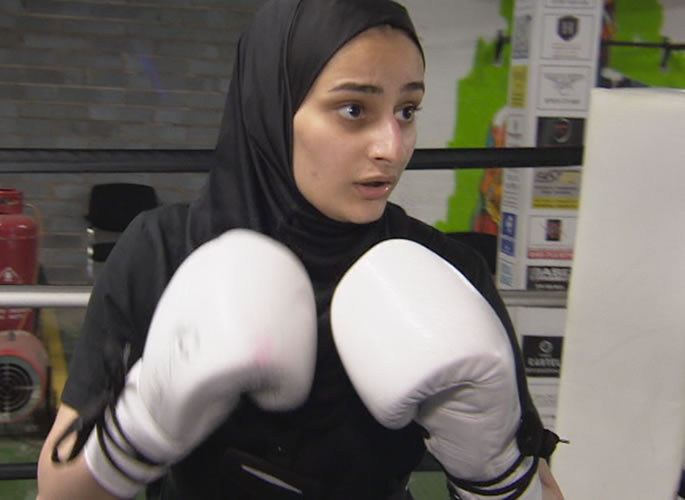 Cognitive behavioural therapy Kam Gillar says there can be a mentality in South Asian communities that “thin is pretty”.

She said: “That is blatantly said to young girls growing up, ‘you need to look thin’.

“There is also a huge stigma in the Asian community that mental health is taboo. A lot of families will say ‘pull yourself together and be grateful’.

“In the Punjabi community there is no word for mental health, the only word we have means ‘you’re crazy’ and there is so much stigma attached to that.

“There’s a lot of fear in the community, but one in three of us will struggle with a mental health issue.

“And then the second thing is a lack of education and awareness.

“A lot of the families I work with have never even heard of eating disorders.”

Since the pandemic began in March 2020, the waiting list for treatment for young people with eating disorders has trebled.

For Safiyyah, the lack of routine and extra time alone with her thoughts was difficult.

She said: “The first lockdown was hard.

“It felt like all the trauma and everything I went through in the past just came back for a moment, because since getting better, I haven’t stopped.”

Following a decision from the International Boxing Association (AIBA) to lift a ban on religious clothing in 2019, Safiyyah competed at an amateur boxing competition wearing her hijab and decided to use the nickname ‘The Hijabi Boxer’.

Safiyyah now aims to compete at the Paris 2024 Olympics.

If she qualifies, the 20-year-old will become the first female Muslim boxer to represent Great Britain at the Olympics.

In order to head towards that goal, Safiyyah aims to fight at the England Boxing National Amateur Championships later in 2021.

Dhiren is a journalism graduate with a passion for gaming, watching films and sports. He also enjoys cooking from time to time. His motto is to “Live life one day at a time.”
Virat Kohli ‘elated’ by India’s Test win over England
ICEC speaks about Racism Allegations made by Azeem Rafiq