Bollywood actress, Raveena Tandon, looked amazing at the Andheri Cha Raja in Mumbai, where she presented the world’s biggest laddoo on September 22, 2015.

Raveena may be working with director Anurag Kashyap in a new film.

Bollywood actress, Raveena Tandon, took part in a historic event by unveiling the biggest laddoo the world has ever seen!

Raveena turned up in beautiful bright yellow saree, designed by Manish Malhotra, for the all-important event on September 22, 2015.

Raveena had the honour to cut the ribbon to reveal the huge laddoo at the Andheri Cha Raja as part of a religious tradition.

The laddoo weighed 8,645 kilograms and was carefully prepared by a team of 42 people across five days. 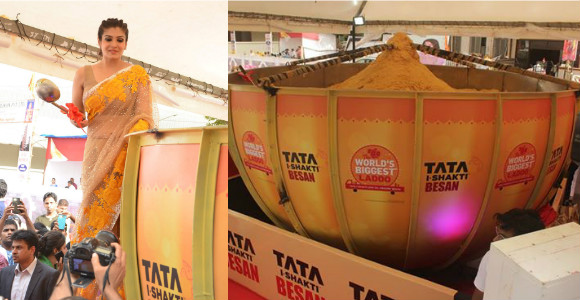 The team successfully broke the previous Guinness World Record of 7,858kg. It was set by a sweet shop in Andhra Pradesh, called Sri Bhaktanjaneya Sweets, on August 27, 2014.

The gorgeous actress was well excited to be part of the special occasion, as she shared her look on Twitter before making a glamorous entrance for the event in Mumbai.

While many were in awe of her evergreen beauty, others had some fashion advice of their own for the star!

Partha Gomes said: “perfect…just add a diamond shining nose ring to this attire it would be a awesome combination”

Raveena enjoyed popular success in Bollywood during the 1990s and won the National Film Award for Best Actress for her portrayal of the wife of an abusive husband in Daman in 2011.

The model-turned-actress returned to the scene in 2015 with an acclaimed performance in Bombay Velvet, as a jazz singer. 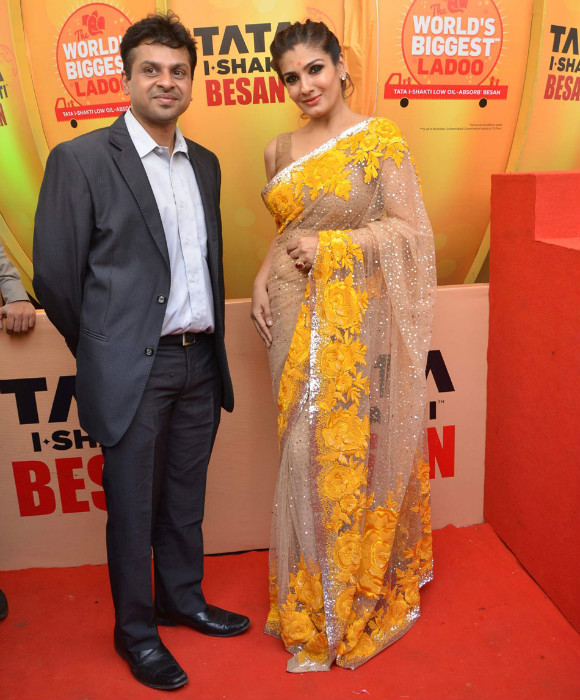 Rumour has it she may be working with director Anurag Kashyap again in a new film called Return Gift.

Raveena says: “It’s too much in the pre stages right now, so I wouldn’t like to talk about it. When they’ll make the announcement, you’ll know more about it.”

Her loyal fans will be sure to cross their fingers to see the amazing actress grace the big screen one more time!