Why Pakistani Women are Hesitant to Treat Breast Cancer

From cultural stigma to lack of resources, DESIblitz delves deeper into why Pakistani women are reluctant to treat breast cancer.

“Rather than seeing it as a disease, it's a sexuality issue."

Breast cancer is the most common cancer amongst females globally, including Pakistani women.

Rates of breast cancer are noticeably higher in Western European countries in comparison to countries in the East.

Chances of survival are also more probable in the west. This is because there are better treatments available in countries with strong economies.

However, during contemporary times, evidence shows an alarming rise of breast cancer patients in underdeveloped countries.

Respectively, treatments and screenings have also proven to be difficult in low and middle-income countries where health facilities are underfunded.

This particularly applies to Pakistan where breast cancer awareness has become vital more than ever before.

Pakistan has the highest rate of breast cancer in Asia. Concerningly, the numbers are not slowing down any time soon in the country as well. 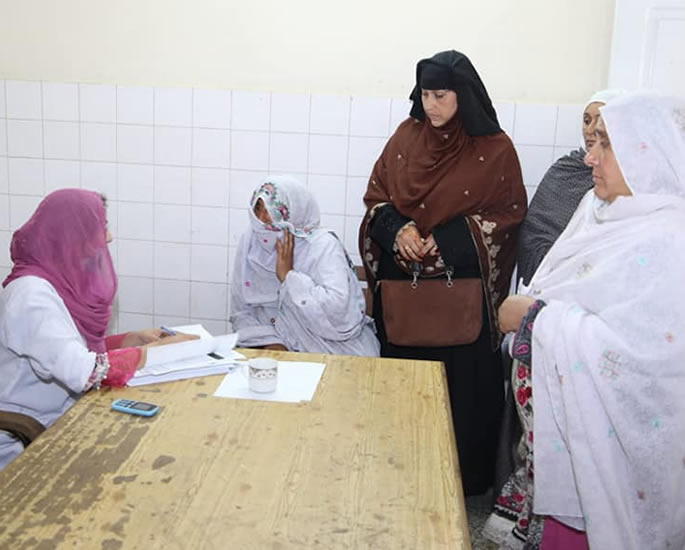 Women in Pakistan, unlike in first-world countries, are hesitant to treat breast cancer due to various reasons.

In 2021, a study from BMC Women’s Health, an open-access journal, found that:

“Women in Pakistan tend to approach health facilities at the last stage of cancer due to plethora of socio-economic and cultural factors such as:

“In Pakistan, 89% of breast cancer patients are diagnosed at a later stage and 59% at an advanced stage.”

Despite an urgent need to tackle these issues, statistics show that the prevalence of breast cancer is rapidly on the rise particularly among post-menopausal women.

DESIblitz explores deeper into why Pakistani women with high cancer rates are hesitant to seek treatment. 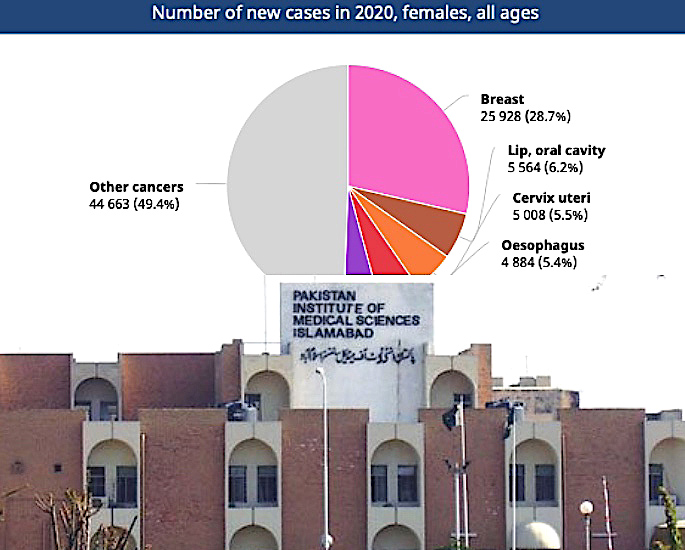 According to the statistical platform Globocan, breast cancer was the leading cause of death from cancer, closely followed by lip/oral cavity and lung cancers.

The chances of surviving these cancers are closely dependent on the quality and quantity of cancer facilities in an area.

Unfortunately, Pakistan falls short across both these departments, with the country’s healthcare system being in disarray for some time.

In 2018, Pakistan’s expenditure on health as a percentage of Gross Domestic Product (GDP) was only 3.20%. This indicates a lack of attention paid to the health sector.

Thus, medical professionals have been under pressure to assist patients in recovery.  Another key factor here is that public hospitals are often understaffed and deprived of essential resources.

To put this in context, there are only 545 inpatient beds for cancer patients in Punjab. This is very less for Pakistan’s most populous province, which has a population of over 110,000,000 people.

Besides that, these beds are not designed specifically for breast cancer patients. They are shared amongst patients suffering from all types of cancers.

PIMS Hospital in the capital, Islamabad has often had a lack of beds, with many describing the healthcare there as “shambles.”

Therefore, expecting good quality treatment under such adversity is unrealistic.

Research also reveals that in America one medical oncologist will attend to approximately 350 patients per year.

Comparatively, in Punjab, on average, an oncologist on average will examine between 1,300 and 1,500 patients annually.

While there has been an increase in resources for cancer patients, the numbers are still inadequate to cope with the burden of cases.

And for potential cancer patients, these numbers speak for themselves.

They are aware of the government’s minimal efforts to rehabilitate Pakistan’s healthcare system. This ultimately discourages patients from seeking early medical attention. 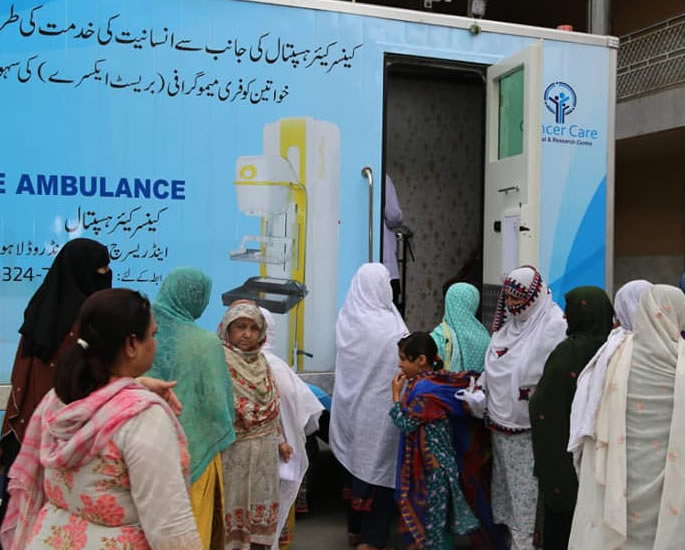 Cancer treatments are very expensive in Pakistan and their rarity worsens the situation.

Data revealed by developed countries shows that patients with cancer are at high risk of bankruptcy.

And, given Pakistan’s already large population of people from low socioeconomic backgrounds, bankruptcy may seem unavoidable for some women.

For these women, the expenses are not worth it.

Through nurture, Pakistani women – mothers specifically – do not want to financially burden their families.

It is common for mothers and wives to sacrifice their own health for the sake of the rest of the family.

In an interview with BMC Women’s Health, a woman living in the rural parts of Pakistan recalled:

“When I came to know about the disease, I thought my treatment expenditures will be a financial burden for my family.

“I belong to a poor family; if my family spends money over my treatment then they would not have enough for their livelihood.”

Despite living under difficult circumstances, there are few to no policies in place that allow cancer patients in such situations to request financial assistance.

Families unable to cover the costs of cancer treatment are also not given much sympathy.

They are frequently held to the same standard of payment as the rich.

As a result, poor cancer patients are forced to postpone treatment due to a lack of empathy on the part of not only the government but also doctors.

The delay, however, inevitably leads to unbearable pain, forcing families to push their mothers, wives, sisters, and daughters to seek help.

“I was reluctant to go for treatment because my family was not financially stable and they could not afford my treatment expenses.

Here, selected patients are provided with financial aid after backgrounds checks are made. They also offer free walk-in check-ups to all patients.

However, one hospital, cannot be responsible for treating Pakistan’s entire poor cancer patient population on its own.

According to cancer reports, even patients at SKMCH&RC who require advanced care are transferred to government hospitals. This is when both resources and facilities are limited. 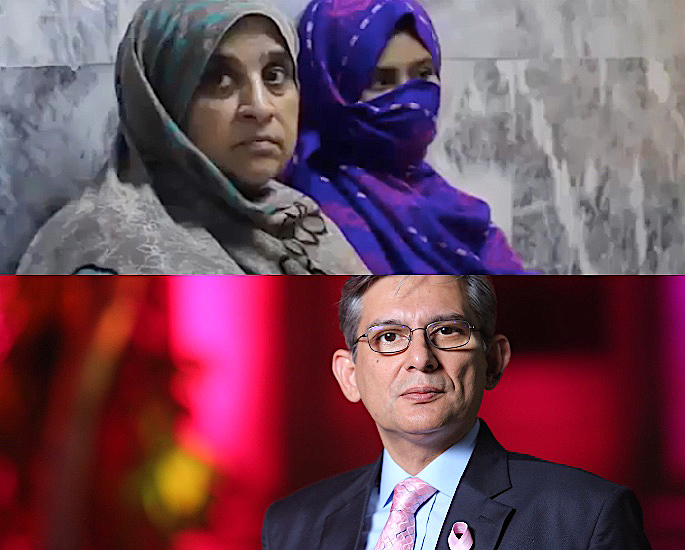 Social and cultural stigma makes it incredibly difficult for Pakistani women living in rural areas to openly express their pain.

Although cancer is a legitimate disease, breasts are often plagued with the image of sex. Omar Aftab, from breast cancer charity Pink Ribbon Foundation told the BBC:

“Breast cancer is associated with women’s sexuality so it becomes a taboo subject in Pakistan.

“Rather than seeing it as a disease, it’s a sexuality issue.”

Labelling breast cancer as a ‘sexuality issue’ reinforces the ideology that patients must keep their pain to themselves.

It becomes a private matter, rather than a family concern.

This ideology then leads to victim blaming and women are at times accused of neglecting their own bodies.

A common example is relatives, which may blame breast cancer on a poor diet or bad hygiene.

Naturally following this, adjectives such as ‘unclean’ and ‘dirty’ are used to describe women with breast cancer.

Unfortunately, many women believe this and keep their cancer a secret, which further sensitises their feminine qualities.

Cultural norms have also contributed to the idea that healthy breasts are a sign of femininity and purity.

As some females begin to believe in the impurity element, such women become hesitant to discuss their breasts with a male doctor.

These women are also uncomfortable in showing their breasts when doctors wish to examine any potential tumours.

In BMC Women’s Health Research, a widowed woman explained how painful the situation is:

“Allowing a strange man to look into your body, to talk about and touch your body is the hardest part of this disease.

“I do not want to even think about these moments.”

The situation is so taboo that women in conservative families with breast cancer may also experience different forms of discrimination.

Family and friends may maltreat women because they are insensitive to breast cancer.

For example, women in traditional households are made to feel ashamed and guilty for causing their family distress.

Bachelorettes are often rejected by potential husbands if they have a breast cancer diagnosis.

Research from NCBI found that most women were worried about their self-image before, during and after their mastectomy.

As a result, some women in Pakistan face not only the physical pain of cancer but also the mental abuse that comes with it. 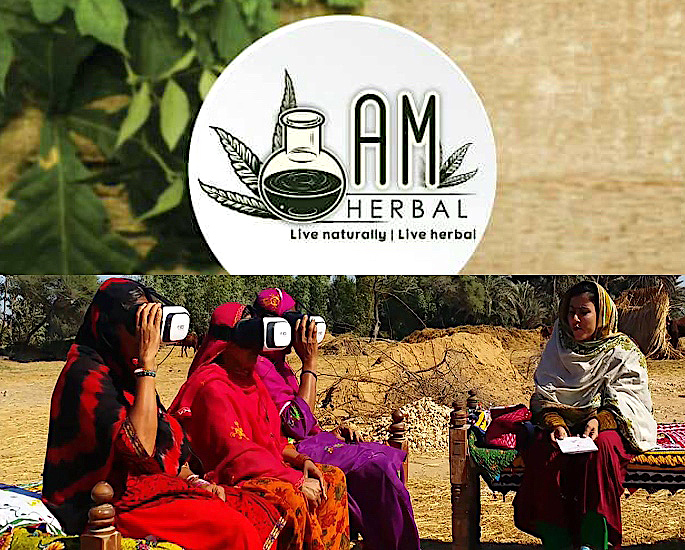 The stigma surrounding breast cancer also has an impact on how well educated Pakistani women are on the subject.

In reality, many Pakistani women do not get treated because they simply do not know what the cause of their pain is.

While women in the west are quick to assume they have breast cancer, Pakistani women from low-income families are unaware of the signs and symptoms.

A small lump they may feel in their breasts remains nothing more than a small lump until it starts to hurt.

In fact, many are shocked once they are told the seriousness and condition of their health.

This is only natural as they have been educated in a way that has censored the majority of the female anatomy.

For this reason, many poor women avoid hospitals because they have given up on getting professional treatments.

Instead of medical treatments and screenings, they opt for alternative methods for recovery.

Many of these uncertain women turn to spiritual healing, such as praying, herbal products and traditional homemade remedies.

Irrespective of remedies providing convenience to some, Pakistani women should seek proper medical advice as a priority always.

If change is not implemented regarding cancer awareness, then Pakistani women are going to live under the false impression that they can self cure their diseases.

This is obviously very worrying as the effects of cancer are life-threatening.

A comfortable environment needs to be created for women to not only discuss but also appropriately treat their cancer.

Small advances such as support groups would allow experienced women to exchange and forward information accurately.

More importantly, the government must intervene. A cultural shift must also take place for widespread change to occur.

Anna is a full-time university student pursuing a degree in Journalism. She enjoys martial arts and painting, but above all, creating content that serves a purpose. Her life motto is: “All truths are easy to understand once they are discovered; the point is to discover them.”